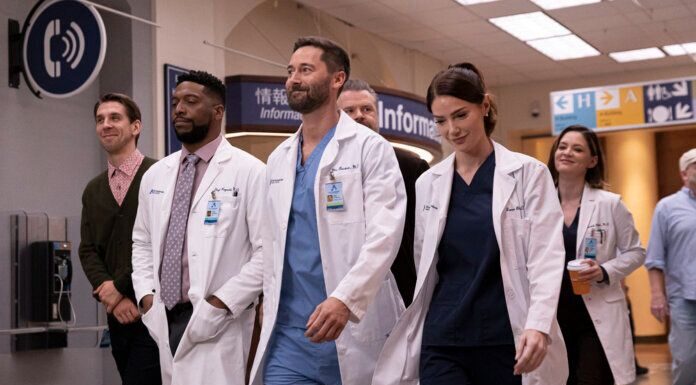 Season 5 of New Amsterdam has a release date, but for fans, the news is undoubtedly disappointing. NBC announced that the fifth season would be the show’s final one in spring 2022 signifies the beginning of the end for the adored medical drama. Based on Dr. Eric Manheimer’s autobiography Twelve Patients: Life and Death at Bellevue Hospital and his 15 years as the hospital’s medical director, the series was created by David Schulner. The adored television show has followed Max Goodwin (Ryan Eggold), the medical director, his colleagues, their patients, and the politics at New Amsterdam, one of the nation’s oldest hospitals, for four seasons. Helen surprised everyone by not showing up for their wedding at the end of the fourth season when she abandoned Max as he stood at the altar. It goes without saying that the shocking turn of events angered a significant number of Sharpwin supporters. To make matters even more difficult, Freema Agyeman, an original cast member, has revealed that she will not be returning for the show’s final season.  www.tvacute.com has a promo and exclusive photos for New Amsterdam Season 5 Episode 1 below. As a result, you’ll be able to mentally prepare yourself for the next episode.

NBC provided the following synopsis of the fifth season:

After a tumultuous year in which the leadership of New Amsterdam underwent a dramatic change, the idealistic and beloved Max Goodwin is back at the helm. As Max takes back the reins at New York City’s busiest public hospital, he must first address his own personal life, which was thrown into uncertainty at the conclusion of season four.

Max and the team will forge ahead with optimism and a renewed commitment to their own lives – reaching for more joy and forging deeper connections with the people they love. Dr. Bloom will continue to navigate her own personal journey, including a complicated relationship with her estranged sister, Vanessa. Dr. Frome will tackle the mess he has made of his marriage to Martin.

And, after a year full of significant family developments, Dr. Reynolds will continue to sort out the relationship with his long-lost father, Horace. Finally, Dr. Elizabeth Wilder, who joined the staff last year, will continue to build on her firm foundation as a critical member of the New Amsterdam team and a vital friend and confidante.

Bloom, Iggy and Reynolds rally around Max as he deals with the fallout from Helen’s decision; Bloom gives extra space to Leyla but is in for a surprise; Reynolds and Wilder help a young terminal patient realize his dream to star in a Bollywood show.

New Amsterdam Season 5 Episode 1 will release on Tuesday, September 20, 2022, on NBC at 10 p.m. ET/PT. The fifth and final season of New Amsterdam would have 13 fewer episodes than the seasons before it, bringing the total number of episodes in the series to 92.  Each episode is expected to last roughly 40 minutes on average. It was announced that the fifth season would be the final one on March 14, 2022.

New Amsterdam will be available on Hulu and NBCUniversal’s own streaming platform Peacock the day after it airs on television. Note that only earlier seasons are available on the free edition of Peacock. Traditional cable/satellite pay-TV subscribers can watch New Amsterdam because it is an NBC show. A TV antenna can also take up local NBC stations. Of course, if you use newer live TV streaming providers. NBC is still prominent on major platforms including Fubo TV, Hulu with Live TV, Sling TV, Direct Stream, and YouTubeTV.