Tonight (Jan 17) marks the conclusion of the medical drama New Amsterdam after it aired for a total of five seasons with two episodes airing back-to-back. This drama, which depicts chaotic life-and-death situations within New York City’s oldest public hospital, has been sustained over the course of five seasons thanks to the idealistic medical director Dr. Max Goodwin (Ryan Eggold).  They begin with Max and Dr. Wilder (played by the amazing Sandra Mae Frank), who discuss their concerns regarding a clinical trial that may involve a cancer cure, discussing their concerns.  As Max gets ready to move on to a new job, he unexpectedly finds himself in the middle of a medical emergency that requires all hands on deck. This causes each of the key characters to think back on the moment they realized that curing was their fate. there is a surprise twist at the end series that gives us a glimpse into the future of the hospital.  If you’re seeking explanations of the Series finale of New Amsterdam Season 5 Episodes 12 and 13 ,tvacute.com provides everything you need to know!

While Max and Wilder are having a kiss, Ben stops them. It’s a montage of everyone, including Karen stumbling into or running into Max and Wilder as they make out all over like two high school students. Gabrielle continues to have plans to depart, and she informs Floyd that by using him as a reference for potential employment in Tanzania, he has shown some interest. Iggy phones Martin and acts as though they are total strangers when asking for their date. Lauren sold her apartment and requested that the EMTs take her and Casey to the potential rental property. Iggy is able to stop several police officers from arresting Carla, the homeless woman, and they inform him that if he takes her, he must first admit her to the hospital.

As a result, he declares that he would take Carla to court. Milo, a patient of Floyd’s, arrives and requests some medications for transplant recipients. He purchased a replacement lung on the illicit market. As they are en route to drop Lauren off at her apartment, they receive a call about a chainsaw assault. Max gives a speech on discovering a treatment for cancer he had, but Wilder informs him that the research trial he took part in years before was a fraud. In order to go to the apartment, Lauren stitches him up after discovering that the chainsaw event wasn’t what it seemed. Carla is brought to care court by Iggy. Lilo needs assistance because his body is refusing the lung he paid for. He traveled to Honduras for the lung but is unaware of the donor’s identity or any other details.

Casey and Lauren are present when they receive a second call about a crash to which they must respond. They now need to retest the demography because it is all white and not representative of New Amsterdam. The trial cannot be made public for FDA approval. Carla is hesitant after learning that she will have to give it up her privileges. The car is spilling gasoline, and a father and son have suffered significant harm. Casey informs her that Paul won’t survive. The Ithaca man informs them that Helen created the guidelines for the cancer trial, making it absurd for them to stop the process at this point. Lauren devises an instant retractor to save Paul’s life. Floyd plans to use Gabrielle’s suggestion to re-implant the lung into the original donor. Max is startled and indignant that Helen could have done this considering that she is the one who would ordinarily advocate better, and Wilder has to explain to him that she did it to save Max’s life. Since none of them would act in such a way for the other, they both agree that it is unethical.

Carla won’t accept the arrangement, despite Iggy’s best efforts to get her to go to the hospital. Floyd speaks with Diego, the young man who donated his lung, and offers to provide him a visa and to replace his lung. Max and Wilder suggest negotiating with Ithaca to increase the trial’s diversity on their dime. Lauren discovers a different location where she would have to start over. She desires to complete it on her own. She wants to be in charge of all decisions and tasks since that is how she wants to live. Iggy and Martin share their dread before deciding to continue the lie of starting over. Max and Wilder converse. She believes that her statement that she wouldn’t forego the trial for him proves that they aren’t a good match, but he contends that it proves they are.

New Amsterdam Season 5 Episode 13 [How Can I Help?] Synopsis

back to a youthful Max is watching his sister die while sitting outside the hospital room. Who will look after my son if I pass away, Ms. Salanco? In a speech explaining his motivation for becoming a doctor, Max declares that his job in New Amsterdam is over and that he will now go to Geneva to work on international health regulations. A pleasant and eccentric new medical director is hired. A woman and her child enter. She is ill and has fluid in her lungs, but she has no insurance. Lauren gives her care. The patient claims that after moving to America, her son stopped speaking.They determine the woman has HLH. It interrupts Max’s Mermade Parade day, which he promised Luna he would help with because they have never successfully treated it, and they are aware that the only one who has is Max.

Lauren is shown in a flashback from 2008, when she was trading stocks and had a prosperous time. When she delivers food to an unhoused guy who subsequently falls and dies, she sobs because she realizes she is helpless to save him. She was motivated by it to become a doctor. Due to his selective mutism, Lauren brings young Demi to Iggy. They departed from Ukraine. Max’s initial introduction, in which she used the same terminology as the staff when discussing her, is repeated by the new medical director. Max determines what is wrong with Illuya and that she has been experiencing this problem for a year. He estimates that 53 doctors will be needed to treat her. Think back to Floyd’s early years, when his parents were having a fight. After seeing his mother sob, he painstakingly reattaches the dish that his father had broken. Floyd wants to make place for everyone else by repairing the mother’s aortic valve while the heart is still pumping.

Max’s decision to assist someone else while once again breaking his word infuriates Luna. As the mother begins to deteriorate, the surgery must be performed immediately rather than the next day. Iggy works on the farm but is frequently subjected to hearing his parents and other family members vent their frustrations and share their issues. After he blows out, his brother finally admits to him that he has excellent listening skills. Floyd understands their plan won’t work when all the physicians, including ones from the past, operate on the mother for the majority of the day. The new physician is still looking for everyone. She sets a meeting at six o’clock.  Before she starts to lose consciousness, Floyd performs the procedure Max asks him to try one last time. Younger Wilder cosplays as Dr. Ross from ER, but several ladies tease her and make her feel unqualified to be a doctor. She is resolute. She is saved by Wilder, who discovers what caused her to code. She is still alive and the procedure was a total success. 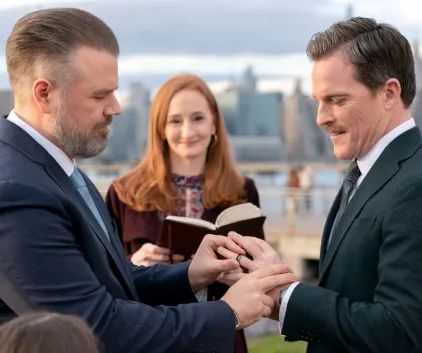 Demi finally talks after spotting his mother. When Vanessa arrives at NA, Lauren is seated next to her. With his family, including Horace and Gabrielle, Floyd has dinner. Gladys officiates Martin and Iggy’s second marriage, which is attended by their children. Max converses with Wilder. He assures her that his choice was the right one and that he must begin making Luna the center of his universe. Their relationship appears to be pausing with an open door. Luna follows him out of New Amsterdam as they go, keeping an eye on everyone in the area. The new medical director addresses the doctors gathered in the room. She talks about how she always wanted to be a doctor and explains that her father made medicine his profession when her mother passed away in New Amsterdam. cited that day as the day she decided to follow in his footsteps and become a doctor. Luna Goodwin introduces herself and requests assistance.