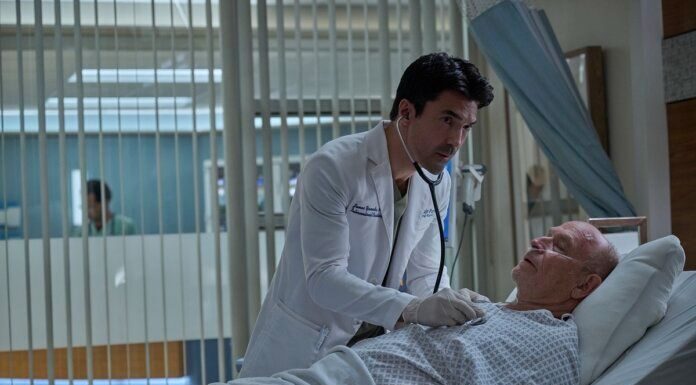 The Resident Season 6 Episode 10 will release on December 6, 2022, at 8/7c on Fox. This is the first time Conrad has seen Kyle since Nic passed away. Guest Star Corbin Bernsen and Ian Anthony Dale appeared.

In the upcoming segment titled “Family Day,” After not having any contact with him for the past five years, Conrad finally meets Nic’s father, Kyle (Corbin Bernsen), when he checks into Chastain Medical Center with an extremely low heart rate. Despite Dr. Billie Sutton’s (Jessica Lucas) urging that her patient not undergo surgery, the patient’s family decides to go forward with the procedure. What better moment to introduce himself to his granddaughter, Gigi (Remington Blaire Evans), than the present? In the meantime, Cade musters up the confidence to face Ian about his addiction, and Dr. Leela Devi (Anuja Joshi) becomes concerned about her twin Padma (Aneesha Joshi). Both of these events take place in the same episode. Go ahead and read out the complete synopsis for The Resident season 6 episode 10 to gain a few more details today about what you could see: Including promo and photos.

The Resident Episode 6.10 Synopsis:  Conrad comes face to face with Nic’s dad when he comes into Chastain with an extremely low heart rate; Billie advises her patient against surgery, but the patient’s family ignores her recommendation.

Cricket and Wolf enter the emergency room since one of them needs medication but was knifing by a “cat.” AJ visits Padma on her self-care day to spend time with the kids and give her space. Aj is perplexed when the bracelets that help identify the babies are lost in the bathwater. Devon is meeting with a different physician who consents to collaborate with them for the initial titanium ribcage implantation. They want Gina to film the surgery-related documentary. Bell will carry out the operation. Kit and Bell underline that in order to consent to the conditions of this procedure, they require innovative input. Kit is shown the Atlanta Daily’s front page, which features a story about Bell, by Leela. Kit is hoping that Bell’s reputation will improve as a result of the procedure. Due to new regulations and the fact that the twins are under 10 months old, the hospital is unable to admit them. AJ needs to make fresh plans. When the patient’s daughter reads the article about Bell, she becomes even more worried.

Kit is confronted with Tessa’s kid, who wants someone else. Bell requests that Kit assist AJ during the surgery. Bell suffers an excruciating flare-up as a result of all the stress. For AJ, Hundley looks after the twins. Irving must be paid by AJ for another. In order to assist Conrad in discovering what transpired to Wolf, Crickets eventually opens up to him about their side business and all the animals they care for. He is dying from a toxin that comes from scorpions. Tessa has an urgent problem, thus there is no promise that she will have surgery on that day. In the ICU, Tessa’s cancer rapidly meta-static. For the benefit of the patient, Devon informs Gina that she needs to cease recording. Sam, the robotics project manager, contacts Devon unhappy about the article and says that if the surgery doesn’t go well, their collaboration may be in jeopardy.

Leela intervenes in the case of the poison patient while also attempting to encourage Bell. Kit forces Devon to make the decision over whether Tessa should continue with the rib surgery or not, and he follows it. Conrad chastises Bell for being overly reluctant and demands that he perform an operation on the venom sufferer then and then. Bell is talked into doing the procedure in the corridor by Conrad, who convinces him that he is not the same man and hypes him up. Bell follows the man’s instructions. It is captured on camera by the film crew. The procedure on Tessa went nicely. When AJ discovers her, Billie looks after the infants. Billie appears to be fascinated by the idea of maybe becoming a mother. Conrad informed Animal Control about Cricket and Wolf. Deal with robotics company is still in good standing. Bell informs Kit of the flare-up. He believes that his MS is worsening and that his new medications aren’t performing as well as they once did. He desires to return to Minnesota. When AJ comes home, Padma is still absent. She has left.