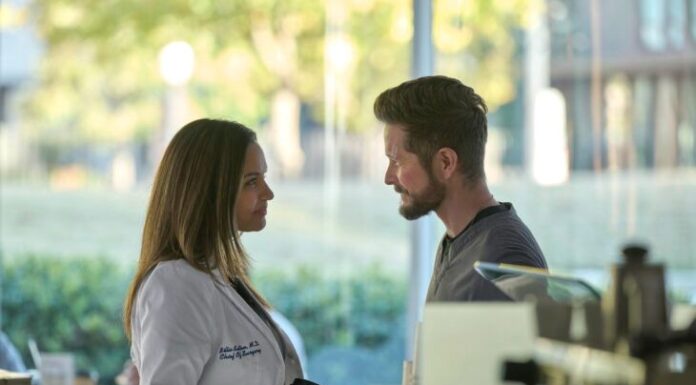 The Resident Season 6 Episode 11 Recap “All in”: When Kit (Jane Leeves) delivers the devastating news that Chastain would be eliminating the emergency room’s trauma unit because of financial constraints, she is the bearer of terrible tidings. Imagine trying to explain that to Dr. Bloom from New Amsterdam. Additionally, there is a Conrad and Billie moment. The Conrad (Matt Czuchry), Billie, and Cade love triangle takes center stage in The Resident Season 6 Episode 11, where it left off before the break. Conrad should speak up and tell Cade what happened with Billie, but it appears that the surgeon will also speak with the ED doctor. Will this be to her advantage?   For a detailed explanation of everything that happened in The Resident Season 6 Episode, 11 Recap continue reading at tvacute.com.

Padma (Aneesha Joshi) stands on the edge of a bridge in the opening scene of the Resident episode and appears to be about to leap. Dr. Leela Devi (Anuja Joshi) is on her phone, she is right. Leela asks Padma to speak to her but she doesn’t respond. Then Padma visits Leela and informs her that she is unfit to be a mother and that her children deserve more than her. Devon is present and observes them hugging. Conrad is at home when Cade calls to say that she wasn’t at a vineyard this weekend; instead, she had gone to see her father at an addiction treatment center. She was asked not to tell anyone. For her and her father, Conrad is delighted. She claims that in order to keep her father safe, she didn’t want to tell him a lie. Conrad confesses to her that he kissed Billie without being really honest with her or himself about his love for her. As she exits, she informs Cade that he ought to have been honest before taking her belongings. He apologizes and claims he attempted to sort things out with them. Cade adjourns.

Dr. Leonard Perry enters the Emergency suffering from a heart attack. He asks James to attend to him, and AJ joins. James and AJ are amazed by the self-diagnosis that Dr. Perry makes. James wants to pause for a second to consider his options. Devon is informed by Irving that the trauma center is shutting and that they must all meet As CEO of Chastain, Dr. Kit Voss (Jane Leeves) later. A woman with head trauma enters the emergency room and just requests her purse. Conrad is requested by Devon to help with this case. Lillian, the patient, attempted to fight off the man who snatched her handbag. She seems confused; dementia may be present. She also has a brain bleed and a shattered limb.

When Conrad runs into Cade at the hospital, she informs him that Voss has asked her to transfer as many ICU patients as she can due to financial constraints. Conrad admits to Billie that he has no idea how they got there, but he is incredibly grateful that they are. She adds, “She too.” Despite the issues that are occurring during Dr. Perry’s surgery, AJ intends to use every resource at his disposal to rescue him. When Dr. Billie Sutton (Jessica Lucas) sees Cade, she urges her to express any feelings she may be having. Laughing, Cade reveals to her that she had been in love with him all along after seeing them dancing at Voss’s wedding. She will survive, according to Cade, and deserves to be loved. Billie apologizes, but Cade tells her not to feel sorry because it is useless. She and Conrad have never declared their love for one another, says Cade. Dr. Perry survived the surgery, but he needs to return because of his distress.

Leela visits Padma, who is a patient in a psychological unit. She is informed by Padma that they believe she is crazy. After her operation, Lillian is doing well and is quite chatty. When Padma informs AJ about Leela, he is heartbroken since he didn’t realise how bad it had gotten. He is now concerned about whether she will be able to take care of their children. James, who is concerned since Dr. Perry isn’t doing well and it’s now out of their control, joins Billie outside to talk. He responds that it’s okay, he understands, and it was great while it lasted, however fleetingly, and that she thinks he’s an amazing guy and that his heart is still intact even if Conrad never existed. He receives a telegram instructing him to visit Dr. Perry.

James enters Dr. Perry’s room as AJ is still there. Dr. Perry is starting the process of dying. James sits on the bed with him and holds his hand while other doctors are around. Dr. Perry declines James’ request to attempt to open him at the bedside, stating that he cannot manage that. Doctor Perry has left. In order to soothe James, AJ places his hand on his shoulder. Cade apologizes profusely to James. She acknowledges James’ claim that they recently joined the same club. If he doesn’t want to be alone, she offers to get him a drink, and he agrees. Conrad surprises Liliane with her pocketbook, which he found in a trash can. Although Lillian claims to be old, she fought like a tiger. Conrad and Billie enter the elevator together and exchange pleasantries. Therefore, it is not just Conrad and Billie who are putting “all in” on their romance. Voss delivers food to the emergency room and says that the trauma center won’t be shutting. Nurse Hundley then calls to inform them that they will have a gunshot wound; “just kidding”. What altered? “I did. We won’t allow a bully to dismantle us piece by piece, Kit decides. He will lose. Up until the money runs out, we will use every penny to provide the best care possible. We’re not going to sputter around like a skeletal shell. We are fully committed.