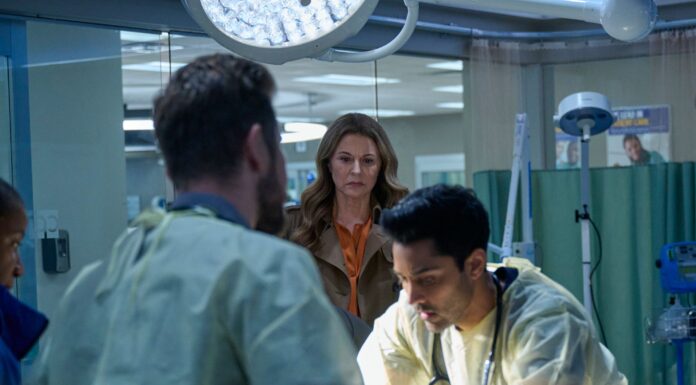 In The Resident Season 6 Episode 12 Recap: Dr. Kit Voss (Jane Leeves) learns that Governor Betez’s (Steven Culp) helicopter crashed just a few blocks from Chastain. The penultimate episode of The Resident offers a solution that might keep the hospital open, however only if the doctors are ready to strike a bargain with the devil. Also in the hour, Bell (Bruce Greenwood) receives some positive news regarding his medical future due to Devon, and Ian (Andrew McCarthy) returns from rehab as he continues to keep it a secret from everyone but his daughter, Cade. For a detailed explanation of everything that happened in The Resident Season 6 Episode, 12 Recap continue reading at tvacute.com.

The morning after for both spouses is seen at the start of the episode. James and Cade shared a bed. Conrad tells Billie that the evening was incredible and she agrees as she wakes up next to him. Both of them concur that being together seems natural. Cade has rapidly moved on and is now awake next to James. Dr. Kit Voss informs Bell that the hospital as a whole is in danger of closing by the spring and that they require his assistance in the operating room. She learns from him that the treatment was less effective this time around.

Turn on the television, there was a helicopter crash, and one of the victims was governor Betez, Irving texts them. It took place not far from Chastain.  Conrad and Cade arrive as Irving and Devon are escorting them into the emergency room. When the governor is brought in, he shouts that he ought to be present. She is told by Voss that he is certain she is enjoying this as he is present. He asserts that he will not allow them to kill him. Voss assures him that they would try their best, and she will work to move him in the interim. Conrad and Devon both make an effort to calm governor Betez down as he continues to compile.

The pilot is under surveillance when she faints in front of her parents, who are indignant and the father wants to scold the governor. When AJ and James finally connect, AJ admits that he split up with Billie.  James claims that everyone arrived where they were supposed to. The governor starts suffering a heart attack while still yelling. Devon answers Marco’s phone and informs him that he is the wrong team member. While bonding and discussing AJ and the kids, Leela is with Padma. Conrad and AJ can see that the patient had two prior stents while the governor, who was in the operating room, is watching. The patient lied about his medical background. Before the catastrophe, he was an impending cardiac disaster. Ian and Irving cross paths on the street.

Conrad and AJ are informed by governor Benitez, who is now awake, that they are not allowed to discuss the governor’s recent or past medical history. AJ informs him that a heart transplant is his only chance for survival. His heart is barely functioning at 10% at the moment. He is ill enough to require a new heart, but not seriously enough to be placed on a waiting list. Betez informs them that if they can’t perform the transplant, another institution will since he wants to be at the head of the list. The pilot is undergoing surgery when she begins to experience issues with bleeds on one side of her brain. When Cain discovers Ian in his office, she greets him warmly and advises him to proceed cautiously. She claims he hasn’t seen Voss yet; he needs to make up his mind and be honest. When Padma returns, Leela confides in Devon that she is worried about her. The pilot is not in immediate danger, but it is too soon to tell if she will survive. Out of appreciation, the Betez informs AJ that he is willing to save the hospital. According to his personal doctor, there are steps they can do to move him to the top of the donor list. He looks after them if they do that.Devon meets Marco and informs him of his change of heart. Devon is ready to join the team.

When Ian and Voss meet, he tells her that he needs to take care of a personal matter and that he is unable to do so while carrying out his previous duties. It would be best for him to resign, he tells her.

Sooooo Ian is resigning and Kit needs a favor for her sick granddaughter next week 🤔🤔🤔 #TheResident #KitVoss pic.twitter.com/fMtJNWnobC

When Cade sees Ian leaving the hospital, he tells her that he was heartbroken and couldn’t tell Voss the truth because he loved spending time with her. Devon is participating in phase two and Bell is thrilled to let Voss know. Voss receives word that a motorcycle accident has occurred and that governor Betez might have lost a heart. Bell expresses his hope that they won’t look back on their agreement with governor Betez.

i am here for Bell just getting home and just hanging out in his wife’s office #TheResident #Kitbell pic.twitter.com/Y9wPT4tKUj

Gigi is excited to see Bell’s granddaughter Sammie (Chedi Chang), whom she last saw when Conrad and Billie picked her up from daycare. Gigi hopes that Sammie will be able to come to her birthday party. She begins to have a stomach ache while Jake and her daughter are in the air.

Look at the little family🥰
They are so cute & just happy being together. #TheResident pic.twitter.com/BuGjn9o0CD