The Resident Season 6 Episode 1: Does Padma give birth to healthy twins? 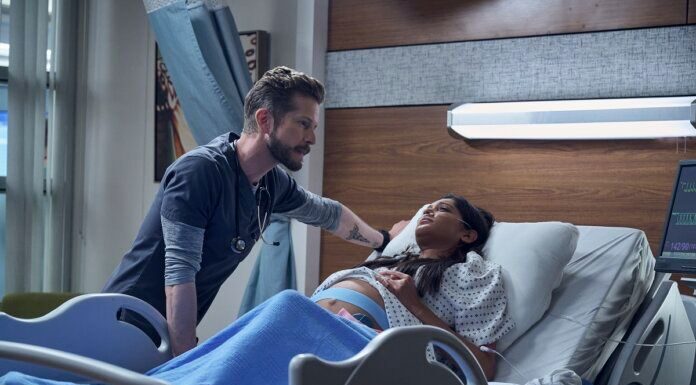 The best network television medical drama is soon to return! They left us with a few unanswered questions as well as some unexpected personal changes in the lives of Chastain’s best. When Conrad entered the private sector following Nic’s passing, among other roles, he initially served as Chastain’s diagnostician. He eventually dedicated himself to clinical trials and was resolved to put all of his attention above all else into that area of healthcare. Devon considered taking a position elsewhere that would provide him with the funds, amenities, and lab access he needed to pursue his love. But his devotion to Chastain outweighed all else, so he stayed. www.tvacute.com has a promo and exclusive photo for The Resident Season 6 Episode 1 below. As a result, you’ll be able to mentally prepare yourself for the next episode.

To begin, the new episode 1 of The Resident’s season 6 is titled called “Two Hearts.” In the first episode of Season 6, there is even more medical drama. This time, Conrad (Matt Czuchry) is faced with his own personal conundrum and must make a choice regarding his love life after Nic. And things take a troubling turn with regard to Padma’s (Aneesha Joshi) pregnancy. Padma and her unborn twins are at the core of the first episode of season six of The Resident on Fox. The episode finds the Padma in the middle of a medical emergency.

The preview for the first episode of season six, titled “Two Hearts,” hints that something unimaginable will occur to a member of the hospital’s staff. In the promo, Leela makes a reference to some negative news in the clip. Padma’s pregnancy turns perilous the doctors resort to Ian to accomplish a miracle. We will have to wait and watch if Padma and AJ have a healthy child. Devon is conducting a trial at Chastain in a modest lab, but he is pleased of the work he and his colleagues have done. To fulfill their deadline for the diabetic trial, they have been working nonstop. Devon and Kit discuss the impending election and how it might affect healthcare if the candidate for governor follows through with cutting funding. Kit worries about how their restricted funding will affect their trials and aid. Kit’s phone call puts Devon’s confidence in check. The meaning of this will not be made clear until the first episode of the new season. check out the season 6 episode 1 synopsis and promo below!

The Resident Episode 6.01 Synopsis:  When Padma’s pregnancy takes a dangerous turn, the doctors come together to find a solution and turn to Ian to perform a miracle. Meanwhile, Conrad makes a decision regarding his love life and Devon leads his own clinical trials at Chastain.