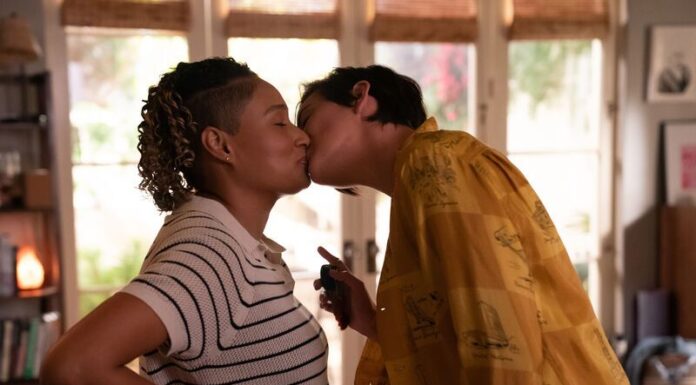 In The L Word: Generation Q Season 3 Episode 5, As Alice and Tess expose the lies in their relationships, tensions rise and Shane finds himself in an unpleasant situation with nowhere to hide. Dani indulges in her romantic comedy fantasies with a hot stranger until she learns that Finley and Sophie’s recently gained trust is at jeopardy due to some major baggage. Now, What will happen next? The sixth episode promises to be more interesting. www.tvacute.com has a clip and photographs from The L Word GenQ Season 3 Episode 6.

“Questions for the Universe”  is the title of the new episode. Alice (Leisha Hailey), Shane (Kate Moennig), and Sophie (Rosanny Zayas) review their erroneous detours on the road to finding a lover in what has been dubbed “a love letter to theater geeks” episode. Will there be significant changes in your life? There are so many potential outcomes for episode six. The anticipation for the upcoming episode is higher than it has been in a while.

The L Word Generation Q Episode 306 Synopsis; Alice, Shane and Sophie grapple with the big questions on their path to finding “The One” after many missteps, heartbreaks and disappointments. Sent on a journey to understand where they’ve gone wrong, each of them, by the end, find they’re ready to change everything.

The L Word: Generation Q Season 3 Episode 6 will release on Sunday, December 25, 2022, at 10 PM ET/PT on Showtime.  On-Demand Available Dec 23.  You can watch them on Showtime online if you have a Showtime Channel membership. If not, you can watch the show on Hulu or Hoststar.  the show also available on amazon prime video

Shane and Tess aren’t conversing. Tess is currently sulking around Shane’s house and refuses to speak to him. The two are unintentionally confined on the balcony together without cell phones due to a stray bumblebee. As usual, Tess is unpleasant and demeaning. Finley is curious about Sophie’s relationship with Dre. Fin is agitated about it, but Sophie is adamant that she loves Finley. Tess might as well agree to tell Shane about their stuff while they’re stuck on the balcony together for an unforeseen period of time. Dani is saved from an errant sidewalk scooter by a hot stranger in a charming meet cute situation. They kiss in a clichéd rom-com fashion. When Taylor, the girl she’s dating, appears at the same movie on what appears to be a date, Alice is attempting to enjoy a solo movie when she notices. Shane ultimately acknowledges that her relationship with Tess is making her very miserable. Dani learns that Dre, whom Sophie was having an affair with while Finley was in treatment, is the street hunk who swept her off her feet. Finley then made an attempt to assassinate Sophie in the bar’s back room. Dre is eye-fucking Dani while singing on stage. While this is happening, Sophie is listening to Dre and keeps picturing Dre fucking her instead of Finley. Using this as a chance, Sophie informs Finley that Dre is there and within the structure. Finley activates the fire alarm because she is completely unprepared for this event. Angie removes a condom that is lodged in her roommate’s vagina, initiating her first sexual encounter with a woman. When Alice catches Taylor kissing the other lady, with whom she is in fact on a date, she breaks into a full-blown tantrum. They were viewed as exclusive by Alice. For that, Taylor is not prepared. Shane and Tess part ways. But why does Shane leave Tess in her own home? Because Tess is feeling sympathetic, she lets Finley off the hook rather too easily for losing a night’s worth of earnings and collecting a fine from the fire department. Tess and Finley attend a conference together since they get along well and may be a match made in heaven. Shane visits her best friend Alice at her home.