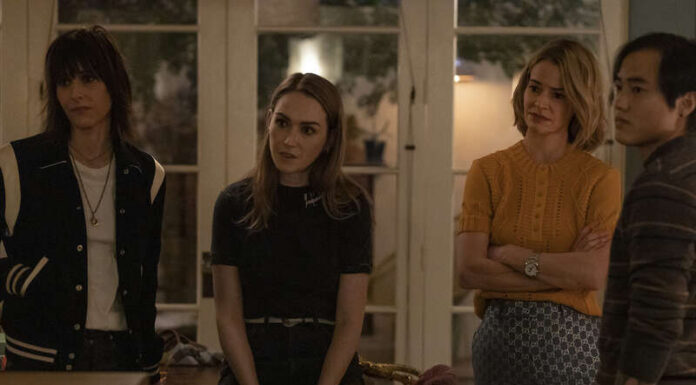 The L Word Generation Q Season 2 Episode 9 opens outside the California Arts Center, the world-renowned previous host of “Provocation,” an art display that sparked religious conservative counter-protests. Bette and his progressive friends were motivated to construct the human chain. To safeguard controversial artists who are attempting to enter the building against adversity. Bette Porter was arrested and spent the night in prison as a result of this incident. She had IRL phone sex with her secret boyfriend, The Carpenter, there. Angie, who never met her Grandpa and whose aunt died from a drug overdose. In the hallway, she dances with Jordi and tells her that she loves her, which Jordi acknowledges. Bette begins to cry towards the end, and Tina comforts her. what will expect in the season finale? We’ll have to move on in order to see this. The ninth episode, “Last Call” promises to be more interesting. www.tvacute.com has a clip and photographs from The L Word GenQ Season 2 Episode 10, as well as a recap of GenQ Season 2 Episode 9.

The L Word Generation Q Episode 210 Synopsis; Bette is forced to make a huge decision as Tina and Carrie’s wedding quickly approaches; Shane and Tess reach a crossroad in their relationship, and the release of Alice’s book has a ripple effect on her personal life. Meanwhile, things between Sophie and Finley reach a potential breaking point; Dani finally has to decide once and for all whether to defend her father, and Angie grapples with the outcome of what happened with her donor.

The L Word: Generation Q Season 2 Episode 8 will release on Monday, October 11 at 10 PM ET/PT on Showtime.  The episode is available ON DEMAND. You can watch them on Showtime online if you have a Showtime Channel membership. If not, you can watch the show on Hulu or Hoststar.  the show also available on amazon prime video

Bette and Pippa attend a rally at the start of the episode, where they have inspired other artists to resist their work being shown in the Nunez wing. Bette and Tina are later seen waiting for Angie to meet her donor at the hospital. Marcus’s wife, on the other hand, walks out and says they won’t be able to meet today. Meanwhile, Sophie is on the lookout for Finley, who has yet to be found. Micah and Miracle are also present during a family meal that she attends. She tries to keep her mother and grandmother in the dark about her troubles with Finley, but Maribel tells them, and Sophie informs them that Maribel and Sophie are dating.

Dani’s father is angry with her about the demonstration and demands that she find a solution. Dani is caught up in work and misses Gigi’s son’s event, which she was scheduled to attend. She then lies to Gigi and claims she was stuck in traffic. Alice is unsure how to inform the general world that she is dating a man. Angie is concerned about her donor and distracted from prom, which leads to a confrontation between her and Jordi. Alice, Tess, and Shane attend a pre-prom party at Bette’s house, where Angie is upset about her donor and distracted from prom. Tess receives a call from Sophie and assists her in her search for Finley, while Shane and Alice converse with Angie. Meanwhile, Tina asks Bette if she said anything at the charity event the other night that angered Carrie. Shane and Alice persuade Angie to attend prom in order to make amends with Jordi. Tina and Bette then went to the hospital to try to speak with Marcus.

Tina asks Bette if she is still in love with her while they wait, but they are cut off before she can respond. Meanwhile, Gigi and Dani reconcile after Dani lies about being stuck in traffic, and Finley arrives at her home. Dani and Gigi do their best to look after her till Sophie arrives to pick her up. Tina and Bette speak with Marcus, who admits that he only refused to speak with Angie because he believed meeting her so close to his death would be harmful to her. They tell him she knows what she’s getting herself into and is eager to see him, so he agrees to meet her the next day. He does, however, pass away as they leave.