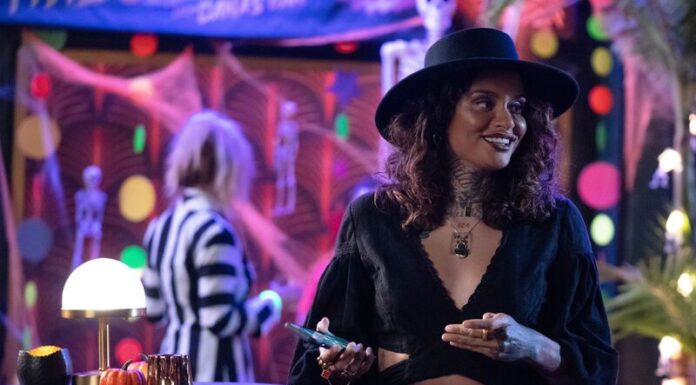 The good news is, Gigi is alive. But hold on, it’s Nat who is swooning over her with doe eyes. Yes, this mishap and near-death experience won’t help Dani settle into a stable position among Nat and the kids in Gigi’s family. Dani is left to take Gigi to the hospital by Nat as she dashes out. This relationship is really strange. This is a sweet meet-cute when Alice chooses Taylor as her date. What will happen next? The fourth episode, titled “Last to Know” promises to be more interesting. www.tvacute.com has a clip and photographs from The L Word GenQ Season 3 Episode 4, as well as a recap of GenQ Season 3 Episode 3 (below).

The L Word Generation Q Episode 304 Synopsis;  Micah finds a queer role model with a familiar face, while a new face comes to town and helps Dani and Sophie break out of their funk. Meanwhile, Alice tests the waters of her new relationship, until scary movie night becomes a little too scary. Shocking truths come to light when the masks come off. The episode was written by Marja-Lewis Ryan & Nova Cypress Black and directed by Em Weinstein.

The L Word: Generation Q Season 3 Episode 4 will release on Sunday, December 11, 2022, at 8 PM ET/PT on Showtime.  The episode is available ON DEMAND. You can watch them on Showtime online if you have a Showtime Channel membership. If not, you can watch the show on Hulu or Hoststar.  the show also available on amazon prime video

Gigi is in the ambulance and she is OK. Nat is gushing over her with doe eyes. Dani’s near-death experience won’t help her fit into Gigi’s household with Nat and the kids. It may expel her. Nat kisses neck-braced Gigi. ! Dani enters the ambulance just before the kiss. Not being the emergency contact stinks. Dani takes Gigi to the hospital while Nat runs off. Alice appears smitten when she meets Joey Lauren Adams at the coffee cart on site. Finley is seriously considering applying to college. Tess is also a jerk to Shane, who has given up her life and house to her. Gigi recuperates at Dani’s.  An unexpected knock at the door. Gigi contacted Nat to help her prepare. Oops. Nat avoids discussing the kiss with Gigi. Like an extremely delusional maniac, Sophie tries to invite Dani and Gigi over to eat supper with her and Finley.

Angie realizes her gallery exhibition kisser is a professor. Ivy (Kehlani) returns! She’s a makeup artist or hairdresser on Alice’s show. Gigi says she saw Nat and the kids—”my family”—when she was hit by the other motorist. Carrie (Rosie O’Donnell) is back after breaking up with Tina, and Tess is her sponsor after her bender last season. She’s in a bad way since she found out Bette and Tina got back together. Oh, and there’s a butch plumber on the show, and they bump into each other—you’ll see. I think they like each other. Gigi is flirting with Nat as Nat pretends that the ambulance kiss meant nothing. Oh, Nat, we know it did! Nat finally drops the facade and scooches closer. Dani glances out from backstage to find Nat and Gigi in the crowd, holding hands while Nat rubs her leg and cuddles up on a couch. They can’t even wait until they’re not at an event when Gigi’s working.

Shane took the bait and is hanging backstage with Ivy and appears very interested. The eyes are a giveaway, and then Shane looks Ivy up and down as she urges her to “get back on the horse” as they chat about Ivy’s profession. Taylor, a coffee cart girl, was in the right place at the right moment when Alice’s show’s date was canceled at the last minute. Alice interviews fans as Margaret Cho hosts the dating segment.  Dani eventually sees the writing on the wall and becomes angry when Gigi decides to leave the concert early. Carrie pushes one another to grow positively outside of their comfort zones in a touching scene. Ivy receives a bang from Shane while on stage. Gigi says she needs time to pick who she wants to be with after the accident and that she needs time to heal. Alice chooses Taylor as her date. Dani comes out and throws oranges at Nat’s car while Gigi and Nat are inside.