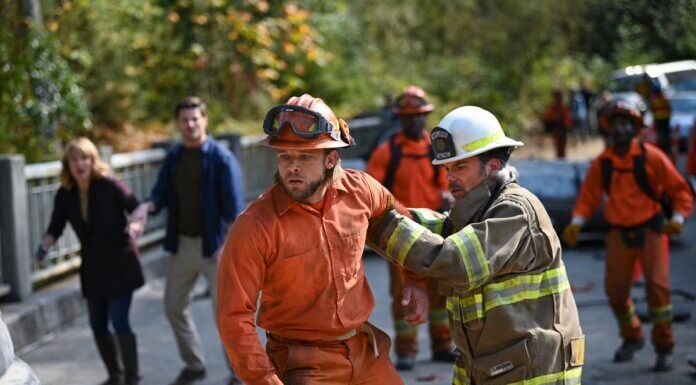 The midseason finale of Fire Country broadcast on CBS on Dec 9, marking the end of the network’s programming until the new year. Among these was an emotional sendoff for Battalion 1608 Chief Vince Leone (Billy Burke). The most recent rescue mission for the crew, which involved two siblings who were trapped in a wrecked automobile, brought up horrific memories of the time when Vince’s daughter Riley (played by Jade Pettyjohn) was killed in a fatal car accident. (tvacute.com) Here is all you need to know about the conclusion of “Fire Country” season 1 episode 8, in case you missed any of the exciting moments.

Manny is still on a gambling binge and nearly gets into a physical altercation with a gambler who has lost all of his money, including his rent. Vince admits to removing Sharon from her previous post. Two siblings are put in danger of death after a hit-and-run. Their vehicle is left dangling from a bridge. When Eve returns, she and Jake talk about Jake’s intentions to live with Gabriella. The squad notices Manny is tense as he directs the rescue operation. Rescue attempts are delayed because it is impossible to move the engine to the accident location. The parents of the children involved in the accident are among those in the gathering. When the parents become aware of this, they are inconsolable. For Vince, the scene brings back some distant memories. Vince and Manny fight over how they are going to handle the rescue differently.

Vince consents to the parents’ request to visit their kids in spite of Manny’s objections. Manny gets criticized by Gabriella for his actions and appearance. Luke questions Sharon about whether Bode’s participation in the program is authorised. Vince relives Riley’s death night in a flashback. The automobile moves as the passengers argue on how to approach the rescue. Jake supports Manny’s strategy. When Sharon says that she persuaded Manny to accept Bode into the program, Luke makes a jab at her. When Bode sees his father having trouble, he attempts to reach out to him. Bode persuades his father to avoid making a foolish choice. The child who had fainted regains consciousness and begins to tremble. In an effort to prevent him from killing himself, Bode leaps inside the automobile. Bode succeeds in rescuing him, but he is stuck in the automobile as it plummets into the river below.