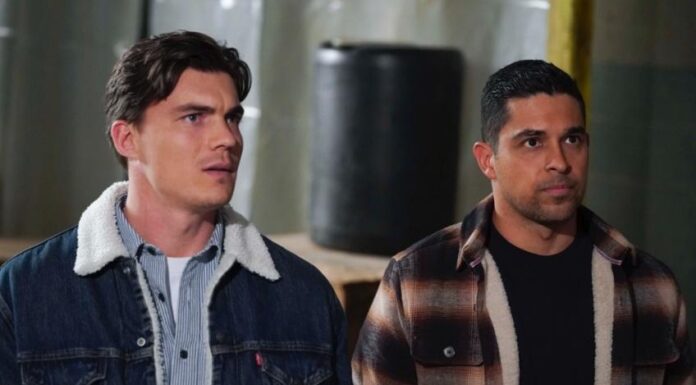 NCIS Season 20 Episode 11, served as a reminder that Medical Examiner Jimmy Palmer (Brian Dietzen) is still struggling with his grief, and that this is an ongoing aspect of his life even though it has been years since Breena passed away. On the other hand, he hadn’t arrived at the point where he could fully incorporate another person into his daughter Victoria’s life. there were some significant events from Jessica Knight and Jimmy Palmer in this episode. when Jessica Knight (Katrina Law) mentions that it’s the most recent film. This new release helped Jimmy Palmer cross another bridge without Breena. She realizes that letting her into Victoria’s life may be the last bridge. Palmer fights back tears as he admits the difficulty. So we hope you all enjoyed it. Now that Episode 11 of NCIS: Current Season 20 has concluded, we may return to this thread to discuss a few plot points that will likely be featured in Episode 12.

Through the official press release for episode 12 that was distributed by CBS, we were able to unearth a handful of fresh official teaser descriptions for this new episode 12. Therefore, as is our custom, we are going to bring it up and discuss it. What will take place next? Given that an old acquaintance of Nick Torres will be making an appearance in episode 12 To discover, we’ll have to dig a little deeper.   NCIS Season 20 Episode 12 (www.tvacute.com) has everything you need to know, including the promo and release date.

The first thing about this episode is that the title of the episode is “Big Rig.” It will feature the return of Zane Holtz as Special Agent Dale Sawyer. He is sometimes Nick Torres’ (Wilmer Valderrama) friend and sometimes his rival will be the most important development in this case. Because both are friends in real life, there will always be something worthwhile that comes with bringing him back on the show. This is especially true when you consider the fact that you can throw the two of them into some compelling action sequences. But at the same time, it will also feature a really fun side story. It has been decided that McGee will appear on a game show. Naturally, we are concerned for the fate of any competitors who will have to compete against him, particularly if there will be some kind of trivia question involved. it sounds like it’s going to be great. Because this is one of the things that we enjoy seeing most from this show. Check out the full synopsis and the promo for episode 12 of NCIS season 20 below to learn a few more details about this story,

NCIS Season 20 Episode 12 Synopsis:  When an old pal of Torres’ comes to him — disheveled and bloodied — for guidance amidst an undercover FBI operation and then disappears, NCIS helps track him down; McGee prepares to be a contestant on a popular game show.

‘NCIS’ Season 20 Episode 12 will air on CBS on January 23, 2023, at 9:00-10:00 PM, ET/PT. the show will switch to Monday nights. It will be available to watch online on CBS’ official website or Paramount+. Have you missed an episode? Have you been longing to get caught up? This episode is also accessible on the following platforms. You can also watch the upcoming episode on iTunes, Vudu, Google Play, YouTube, FuboTV, Amazon Prime (with a Paramount+ subscription), DirecTV, YouTube TV, Hulu + Live TV, Spectrum, and Xfinity’s VOD and Live-TV platforms.