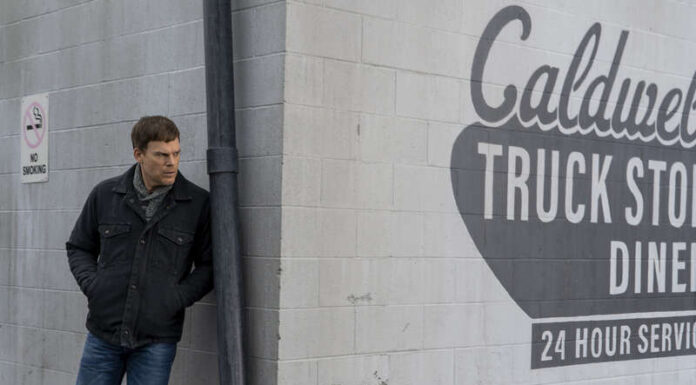 In the previous episode 6 of Dexter: New Blood, Secrets have been unearthed, but who will be the first to know? Angela didn’t spare any time in questioning Dexter about his true identity. Julia Jones and Michael C. Hall did a fantastic job with this. While she was enraged and appalled by his lies and treatment of Harrison, he was only attempting to figure out how much information to reveal in order to appear weak. It was an hour of tension, twisted expectations, and terrific character moments. Let’s take a look at it below to find out the full recap of episode 6. Considering everything we (www.tvacute.com) know about the series so far, For the next episode 7. So we’ve put together this handy guide that answers every question you might have about how to watch Dexter: New Blood, whether it’s available for streaming, and more. You can find exclusive photos for Dexter: New Blood Episode 7 titled “Skin Of Her Teeth” as well as a summary here.

Dexter is determined to protect Harrison at all costs now that he knows there is a serial killer in town, but it’s easier said than done. Now that Angela knows who Dexter truly is, he must meticulously arrange each take. In tonight’s episode, Dexter Morgan will do what he does best: investigate a crime scene like in the old days! Will he be of any use to Angela if he helps her? We’ll also discover that Kurt is smarter than we thought, but is he one step ahead of Dexter.

Talk about its rating, In this regard, Dexter: New Blood has outdone itself. Showtime’s internet subscriptions (not cable add-ons) soared after Dexter: New Blood’s November 7 launch, according to Variety. In November, the same month Dexter: New Blood premiered, the Showtime streaming app had a 254.4 percent increase in downloads. As a result, many fans are urging Showtime to revive Dexter: New Blood for a second season.

Dexter: New Blood 107 Synopsis:  Dexter is worried that a serial killer may have set its sights on someone he cares deeply about. So, he turns from predator to protector… a role he’s not comfortable playing. Meanwhile, Angela arrests someone from Iron Lake who may be the culprit of a cold case that is near and dear to her heart.  Dexter and Harrison run into some more bumps in the road in their relationship, leading Harrison to turn to a very dangerous person as his father figure.

Dexter: New Blood Season 1 Episode 7 will release on Showtime on December 19 at 9 p.m. ET/PT. (USA) Following the launch, new episodes will air weekly. Dexter: New Blood may be seen on Showtime.  Then, a day later, on Monday, December20, at 22:00 GMT, British fans can watch on Sky Atlantic.

How Can I Watch Dexter: New Blood Episode 7 Online?

Dexter: New Blood will consist of ten episodes, one of which will air each week. Only the first eight episodes’ names have been announced so far. Dexter: New Blood will conclude on January 9, 2022, with the last episode. Fans should expect around three months of death, darkness, and mystery in the coming months. Here are the air dates for each of them:

Dexter worries about Harrison despite his apologies for recent events. But when Dad discovers it’s for Kurt, he refuses to sign it. Dexter’s spider senses are tingling at Kurt’s apparent fondness for Harrison. Angela pulls Dexter over again, but this time for real. She particularly requests Dexter Morgan’s license and registration. Ouch. Then she urges him to drive straight to the station. Dexter explains that he was fleeing “all the killing” in his life. He tells her Rita and his sister, “the closest person in the world,” was slain. He couldn’t go back to homicide with all the blood, violence, and misery, so he chose to start over. Angela is sympathetic but claims he lied about her. “How can I trust you, Jim?” He asks if they can discuss it more over dinner, but she isn’t ready.

In the recap of Dexter’s New Blood 6, Dex wonders who found him. He wonders if Molly is the sleuth. Molly asks Angela if she may interview Kurt to catch him lying, but Angela says no. She cannot frighten a probable suspect before the cops have built a case against him. Molly’s podcast about him. Molly says Sgt. Doakes was killed for the Bay Harbor Butcher murders, but he was out of the country at the time. But the powers that be were eager to close the case. He may still be around, says Molly. “She may probably be Angela’s source,” Dexter suspects. Is she after me? Dexter joins Harrison’s next therapy appointment, telling the therapist they could use some communication advice. Harrison tells the doctor his whole tale and admits he got high. Also, both father and son have issues with abandonment and hereditary trauma. Harrison claims his mother was murdered after Dex recalls his divorce from Rita. Astonishingly, the youngster admits to only knowing what he read online. But is he being honest? Angela and Logan spitball about Kurt and ponder about the local caves. Logan doesn’t seem to agree, but Angela is desperate to find out. Dexter contacts Logan for a beverage, claiming he needs help on how to reconcile with Angela. He’s really looking for Molly.

Molly broke up with Logan, but she’s staying in town to work with Angela. Doomed, Dexter believes. Harrison tells Aubrey he thinks about hurting people in therapy. It wasn’t the first time, he says. The youngster is definitely distressed. We’re both outsiders, but that doesn’t have to destroy us… and they mack it. Angela finds Harrison in Aubrey’s bed the next morning and takes him home. She yells at “Jim” to handle it. While Dexter is busy with Harrison, he can’t help but think about Molly. Dexter New Blood 6 Dexter hovers behind the bar while Molly and Kurt talk. Meanwhile, he discreetly records their chat behind the bar. Murph says his son wasn’t in the hotel, and Kurt admits to lying about Facetime. He claims Matt showed up intoxicated to his house and is currently hiding away at his cabin. To interview him, she must pledge not to tell anyone where Matt is. Is Molly’s face about to be blown off? Dexter follows and notices how remote the location is. A power generator. A propane heater tank “Serial killer 101,” Dex says.

Molly pulls out her mace as Kurt leads her down his long eerie basement hall. Dexter interrupts, stating he was driving by and checking for high schoolers. Molly reveals Matt is at the apartment, but Kurt denies it. Dexter hurries past him, noting the camera and the outside-locked door. Dexter offers Molly a ride home, which she gladly accepts. Molly says she began to feel like an episode of her own podcast. “You have no idea.” No one should tell Angela she spoke to Kurt. But he lets her live (for now). Plus, he thinks Kurt is the serial killer Angela seeks. Angela and Teddy explore the caves and discover a man-made rock formation. They destroy the wall, revealing a narrow path. She creeps through the passageway to find a human foot. After studying the remains, she discovers it’s Iris. Harrison wins his huge match but fractures his opponent’s arm afterward. Dexter runs over to push Kurt and warn him to get away from his son. But Dexter gets a call from Angela. I don’t need Jim when he asks how she is. “Dexter Morgan.”