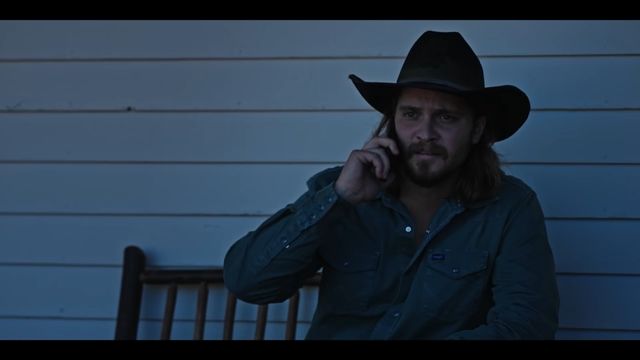 Paramount has released the exclusive Sneak Peek from Yellowstone Episode 408 “No Kindness for the Coward.” As shown in the sneak peek from Sunday’s episode, (8/7c on Paramount Network) John’s Son Kayce (Luke Grimes) is relaxing on his porch with his new puppy Sunka when he notices he’s being watched by…Wolf.

Is that a wolf? It is, in fact, the case. Kayce calls Mo (Played by Moses Brings Plenty) to express his amazement at seeing a wolf east of Big Timber, whether it’s the same one or not. Though Thomas’ right-hand man vows to speak with the chief about this rarest of happenings, he has something else on his mind that can’t wait until the next day, unlike his check-in with Rainwater. “Kayce, whatever you do, don’t shoot it,” Mo warns. Kayce responds, Well if it gets near my horses, I’m shooting him. Mo says, If it goes near your horses, it’s a test. And if you shoot it, you fail.

That was a difficult test. What do you believe the wolf’s surprise appearance means? Is it a parable? Avery’s spy, dispatched to keep an eye on her crush and Monica? Will Kayce pass the test, most importantly?

Yellowstone Season 4 Episode 8 will release on December 19 at 8:00 p.m. ET on (USA)  Paramount Network. If you’re in Australia you can catch it Monday evening.