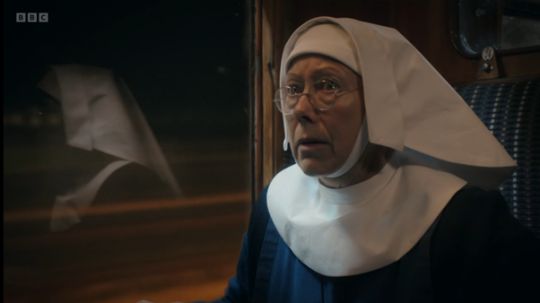 As the shocking ending to Call the Midwife Season 11 Episode 7 took many fans by surprise, not only for the people on board the train but for the entire community, things are looking pretty depressing going into the Season 11 finale. Prepare yourself for all of the emotions in Call the Midwife season 11 finale. After all, we’re building up to a spectacular climax, one that will almost certainly make you cry and make you want Season 12 to arrive sooner rather than later.

A train disaster puts the lives of numerous characters in jeopardy. Despite expectations that Sister Julienne and Dr. Turner, two of the longest-serving and most-loved Call the Midwife cast members. we are particularly concerned about them. We see the start of a desperate situation in the end of tonight’s episode: There was a railroad accident. This is a story that puts a lot of different characters in danger, including Sister Julienne and Dr. Turner. Some of the other characters will do their best to assist, but will they be able to do it in time? We sincerely hope so, but you should expect this to be one of the most heartbreaking episodes since Barbara’s death. This episode’s writer Heidi Thomas isn’t going easy on anyone!

Check out the complete Call the Midwife season 11 episode 8 synopsis for additional information on what’s coming up:

Nonnatus House faces its darkest day after a tragic incident in the heart of Poplar. As the community rallies together, the team must overcome personal anguish to help the injured.