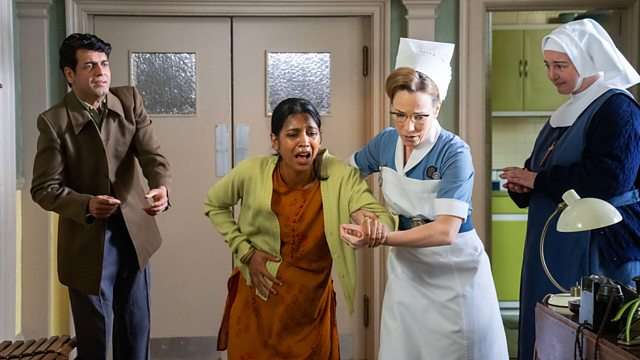 The popularity of Call the Midwife isn’t going anywhere any time soon. Season 12 follows the 2022 Christmas special, and like always, creator Heidi Thomas has a ton in store. Trixie’s return is confirmed, so there may be lots of opportunities for romance between her and Matthew. And given Lucille and Cyril’s baby heartbreak from the previous season, is it possible that they will finally become parents in the upcoming one?  Do you want to know when Call the Midwife season 12 will be back on PBS and BBC One?   Here www.tvacute.com share with you everything we know about Call the Midwife season 12 episode 1.

On January 1 at 8:00 p.m. Eastern, BBC One will air Call the Midwife season 12 episode 1 if you live in the UK. We firmly believe that this qualifies as one of the major events that should be televised on New Year’s Day on British television! Unfortunately, American viewers will have to wait much longer since new episodes are now scheduled to begin airing on March. If you are a new watcher, you should be aware that PBS frequently receives the programs a little bit later than when they air elsewhere in the world.
What will happen in Call the Midwife season 12
There is no shortage of drama that could occur at Nonnatus House in terms of prospective storylines. “The stories we tell are like kids – they never stop coming, we love them all, and we swear to do our best by every single one,” teased show writer and creator Heidi Thomas. Change is coming to Nonnatus House in April 1968. The sisters want to leave Sister Veronica, their newest member, with a positive impression. After Enoch Powell’s explosive speech, racial tensions loomed over Poplar. Fred is unhappy to learn that the Civil Defence Corps has been disbanded in an official letter, so Nancy and Trixie work together to care a terminally ill patient. In terms of the tale, let’s just say that Poplar will experience some difficult circumstances, along with some major moments for Trixie, a new recruit, and Nonnatus House. See the Call the Midwife season 12 episode 1 synopsis below for additional information:

April 1968. Racial tensions cast a shadow over Poplar, Nancy’s eyes are opened when she supports a dying woman, and Nonnatus House welcomes a new sister.

Who will be in season 12 of Call the Midwife?

For the 12th season, the majority of the regular Call the Midwife actors ought to be back.
Sadly, it appears that Sister Frances, played by Ella Bruccoleri, and Sister Hilda, portrayed by Fenella Woolgar, who were both rumored to be leaving in this year’s Christmas special, are leaving (at least temporarily).  Trixie’s return is confirmed.
Rebecca Gethings, who will play Sister Veronica, is one new actor who has joined the ensemble. She remarked of her persona, “She ruffles a lot of feathers and puts her foot in it a lot. But she always acts for the better. She isn’t, however, reserved or timid. She enters without being asked. She simply enters and begins working since, in terms of her ministry, she is worthless unless she is bringing about change. We’ll confirm any other season 12 guest stars as soon as possible.

When Will Call the Midwife’s Season 12 Debut on PBS?

On March 19, 2023, Call the Midwife’s 12th season will have its PBS debut. Every Sunday at 8/7c, new episodes will be broadcast. Up until June 6, 2023, every brand-new episode will be accessible for free streaming from the time it airs. Each episode will be available for streaming for PBS Passport subscribers 30 days prior to the broadcast date.