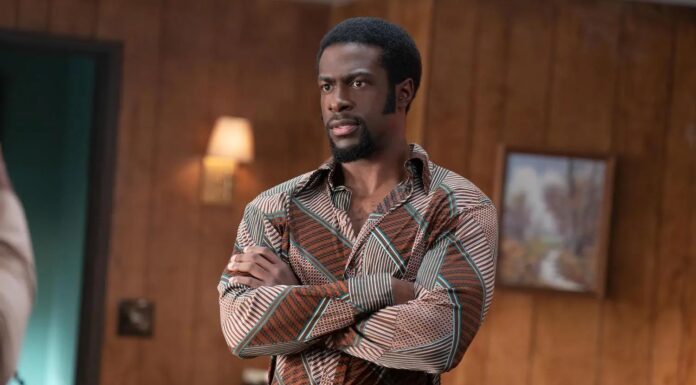 Welcome to Chippendales, Hulu original series, which stars Kumail Nanjiani as Somen “Steve” Banerjee, the founder of the Chippendales, depicts the sparkle and glamour of 1980s LA nightlife without erasing the gritty overtones of the true story. Viewers may observe how Steve’s ambition to become a prosperous businessman starts to change in Welcome to Chippendales Episode 4. Also, Steve (Kumail Nanjiani) and Nick De Noia (Murray Bartlet) clashed over a number of issues related to the Chippendales. Will Nick eventually resign as a result of this? Will Denise (Juliette Lewis), on the other hand, be able to keep him composed? We also get a somewhat different introduction in Episode 4. (tvacute.com)Here is the recap of Chippendales, season 1, episode 4.

As Otis McCutcheon(Quentin Plair) approaches his destination for work, the mailman is delivering the boxes of calendars. He halts him and requests to see one. Otis discovers he is absent from it after going through each month of the year.  How many calendars did Steve order, Ray Colon (Robin de Jesús ) queries Steve. Steve claims it is not enough because preorders at some retailers have more than doubled. Otis needs assistance with some of the practices, according to Denise, who enters the room. When Ray inquires about Nick, Denise replies that she hasn’t heard from him. Steve responds, “I don’t, he abandoned us without giving any indication of when he could come back,” to Ray’s statement, “I hope he is okay. I could murder him.

Then, Nick is seen making a presentation for Chippendales to some people in the east. However, he gives the concept a new name while presenting it: US MALE. The boys see he’s serious but are perplexed by the idea as a whole. Nick departs, aware that he would need to go back to LA, after they describe it as “sleazy.” The Chippendales calendar models arrive at the mall in Panama City, but Otis watches from the sidelines. Otis confronts Steve on his exclusion from the calendar. Steve explains that because he is black, it was better for the calendar if he wasn’t included. But he advises him not to take it personally and that there is only one colour that matters in business—green. A business owner who Steve speaks with assures him that he can sell as MANY calendars as he can. In New York, Nick is pouting when he spots the performer he has his sights on. Nick goes to a bar to unwind after the disappointing meeting at lunch. He encounters Bradford Barton there. After a brief moment of sharing at the bar, the two end up in bed together. The two now exchange stories about being or not being out to the public after their sexual encounter.

The two engage in hot sex after which Nick brings up Chippendales as they discuss their personal life. Nick is surprised to learn that Bradford is aware of the club, but he explains that he plans to launch his own male dancing company in New York. Bradford is perplexed as to why Nick would abandon something that is already so well-established, and Nick responds by explaining his problems with Steve. In essence, Bradford advises Nick that he is insane and that he should instead focus on growing the brand. It’s also beneficial to be aware of Bradford’s enormous wealth. When Denise receives a call from Nick, she scrambles to get the men ready for their upcoming performance at the club.

As US MALE and the other man he is with explain, it is a poor idea, Nick is now informing him that he is in town pitching Chippendales. He instructs him to begin the performance in New York instead, and Steve will never find out. Steve is in a panic at the printer guy back in LA because he can’t make calendars quickly enough. He explains that he has other customers and that it might take three to four weeks to manufacture the desired amount. What if you didn’t, Steve asks as he halts him (obviously talking about customers). Denise is working hard behind the scenes at the club to maintain order when she gets a call, but she won’t answer it until she realises it’s Nick. She is instructed to pack her bags and follow him to New York City. Nick then explains his plans for opening the business in New York, but Denise is very dubious. Then he claims to have a supporter for the location.

The ladies freak out as usual as Otis takes the stage. Irene (Annaleigh Ashford ) is brought upstairs by Steve so that he can inform her that he has purchased a calendar-making press. He claims that he did the numbers and it will work out, but Irene asserts that she is in control of finances and that it is not his decision. Otis is unconcerned about the money the calendar men are making despite seeing it. Then, in order to start portraying them as the power couple, Steve brings Irene to the upscale restaurant. They encounter some opposition, though, which Steve attributes to the hue of his skin. After speaking with him, it appears that he is accurate. Then, we see Steve in the printing facility, perhaps second-guessing not including Otis in the calendar. When Nick arrives, Denise slaps the living daylights out of him before giving him a huge hug. Then, we observe him ascending to Steve’s office. If he has a problem with opening a Chippendales in New York, he will open a club named US MALE. He essentially lies about the idea’s supporters opening their wallets, so he had best support it. If he rejects the offer, he says he’ll take everything from him. Steve is furious.

Change is coming to Chippendales🩸 Stream Episode 4 of #WelcometoChippendales Tuesday on @hulu. pic.twitter.com/ryOZS2B6kj

When Irene confronts Steve about Nick’s return, he tells her a falsehood and says that he is moving him to the soon-to-be-opened Chippendales in New York, which is actually his best idea yet. Denise and Nick were thrilled when Irene said, “We are going to New York,” as she made her way downstairs. Steve interrupts Otis as he works with Ray to generate pictures for his own calendar near the end of the episode. Otis naturally asks Steve whether he’s ever thought about employing another Black dancer, and Steve promptly chastises him for creating a rival calendar.

Steve doesn’t respond since the response is negative. Otis feels out of place and can no longer put up with Steve’s racism. Otis is invited to dance at the New York venue by Nick and Denise but declines. The Chippendales bouncer informs several males in line that they need a card to enter as Otis exits. He quotes the man from The Palisades when they inquire about how to obtain one, saying, “It’s a process.” In the final scene of the episode, Ray enters Steve’s office and kneels at his feet. Ray refers to Steve as a king, kneels down, and kisses the ring in an odd act of loyalty. Steve takes it all in since Ray’s actions have a direct impact on him.