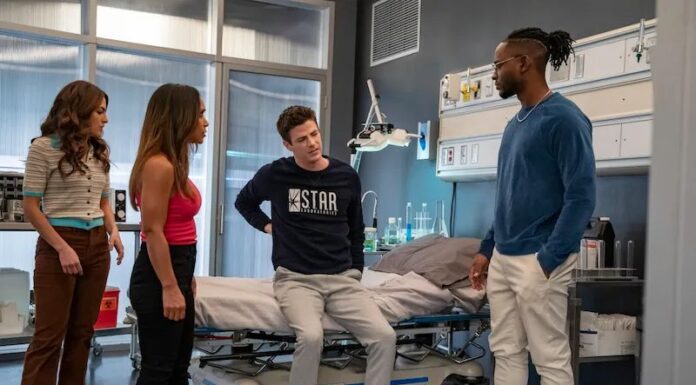 The release date for The CW’s superhero series The Flash season 8, episode 16 is on  May 25, 2022.  Barry Allen dealing with a new dilemma as he begins to age.  When the Flash (Grant Gustin) gets hit by a shockwave, his body starts to age prematurely.

As Team Flash begins to pick up the pieces of Killer Frost’s hollow death, Barry Allen decides to save his wife Iris West on his own. Following the chronology being altered again, Iris developed increasingly severe symptoms of a temporal disease, resulting in her slipping into the Still Force. However, as Barry plans a rescue attempt, a devastating betrayal puts him on the defense  Read the recap below.  Do you want to know what happened on The Flash this week?   What you need to know before starting The Flash Season 8 Episode 16 is all about tvacute.com. In order to mentally prepare for the upcoming episode of the flash.

A longstanding Arrowverse cast member directed the episode which was written by Jess Carson and Thomas Pound. Caity Lotz, who plays Sara Lance on The Flash, makes her directorial debut with episode 16 after directing many episodes on Legends of Tomorrow. As The Flash season, 8 approaches its conclusion, The Flash season 8 finale, will wrap on June 29. Fortunately, The Flash’s adventure is far from over: the Arrowverse drama will return for season 9 in the 2022-2023 television season.

She's bringing her talents to Team Flash. A new episode of #TheFlash, directed by @caitylotz airs TONIGHT at 8/7c! pic.twitter.com/rVXhW2Dx7j

Allen appears to be fast-aging in the trailer for The Flash season 8, episode 16. It depicts Barry interacting with an unknown foe who appears to be causing Barry to age quickly as the Scarlet Speedster begins to grey.

Where to Watch The Flash Season 8 Episode 16

The Flash season 8 has six episodes left. The Flash Season 8 Episode 16 will release on Wednesday, May 25, 2022, from 8/7con The CW.  You can watch the same episode the following day online on The CW app. If watching “The Flash” Season 8 live on The CW isn’t an option, there are various applications that will stream episodes. The CW is available on Hulu With Live TV, Fubo TV YouTube TV, and AT&T TV. Also available on Amazon Prime Video. The Flash season 8 will be available on Netflix around 8 days after their season finale airs. The show is still available on Netflix in the United States.

While searching for Deon and learning more about the present situation of the Still Force, Barry learns Iris has gone missing and informs Chester P. Runk and Cecile Horton. Meanwhile, Caitlin Snow discloses to Mark Blaine her plan to resuscitate Frost: Barry seeks assistance from Tinya but to no avail. Iris has been lost in the Still Force, according to Deon. Barry follows Joe in with an isotope sensor that can assist identify Iris, despite Joe’s advice. Renee is located, but she vanishes again. Deon then discovers a temporal particle in Iris’ place, which he grabs, smashes the sensor, and flees with. Barry is stuck with Nora, who Deon hauled in from 2049, in a replica of Joe’s house. After connecting to the Still Force, Barry and Nora are able to break through the time barriers that are impeding their exit and escape. Meanwhile, Kramer summons Chester to examine a device discovered following an explosion. It was built using his open-source technology, but he later learns that it was in an attempt to supply hot water to citizens in need. Someone later gains access to Chester’s computer and downloads all of his data. Mark returns to Caitlin’s home lab on the other side of Central City, having changed his mind, and agrees to assist her in her plot to resuscitate Frost as the two put their plans into action.