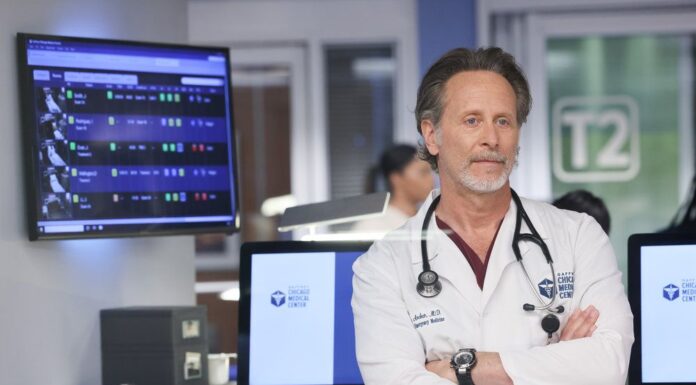 As another season comes to an end, we don’t know what the writers have in store for us, but our first look at the finale episode of season 7 suggests it will be another memorable one. Do you want to know what will happen in the finale? The most recent promotional materials for Chicago Med season 7 episode 22 including the promo, and synopsis can be found at www.tvacute.com.

Dr. Ethan Choi (Brian Tee) has handed over the job of chief of the emergency department to Dr. Dean Archer (Steven Weber),who was previously his temporary substitute. Chicago Med Season 7, Episode 22  is called “And Now We Come to the End ” and promises to be a startling finale  We’ll see if they can work together after that in the finale while treating the son of Med’s general counsel. Also on the agenda: Will (Nick Gehlfuss) and Hannah (Jessy Schram) battle over a kidney transplant patient, Crockett (Dominic Rains) must make a difficult decision while Blake (Sarah Rafferty) is in surgery.

Chicago Med Episode 7.22 Synopsis:- Halstead and Asher clash over a patient in need of a kidney transplant; Marcel faces a tough decision when Blake is in surgery; Choi and Archer treat the son of Med’s general counsel; Med’s family grows.

The Chicago Med Season 7 Episode 22 will release on May 25, 2022, which airs every Wednesday from 08:00 PM – 09:00 PM on NBC.  You can also stream this episode on NBC’s website, CityTV, Hulu, Peacock TV, and YouTube TV. If you want to watch the previous seasons of the show, you can buy them on Amazon Prime Video. Chicago Med Season 8 Confirmed