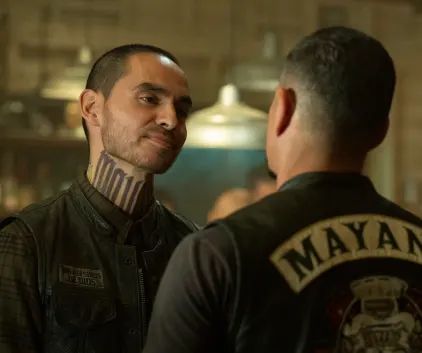 Season 4 of Mayans M.C. has significantly advanced with considerable changes to the namesake club’s makeup. While Angel Reyes has been on an upward trajectory, EZ Reyes has been on a downward spiral, which culminates in a shocking Season 4 finale.  Manny (Manny Montana) is one of the characters who meet a tragic end in Mayans M.C. Season 4 Finale titled “When the Breakdown Hit at Midnight.” Meetings of the Mayans go horribly wrong.

Terry’s sponsor from San Bernardino Sons of Anarchy had returned. The finale episode of Mayans M.C. Season 4, brings back Season 3 villain Isaac (JR Bourne) and reveals him to be a member of the Sons of Anarchy.  When Tig Trager pays a visit to Terry in the hospital in the finale episode, he becomes enraged and upset by the reappearance of the latter’s sponsor. Tig reveals throughout their talk that Terry’s sponsor is the younger brother of San Bernardino Mayor Les Packer, and that he is not well-liked owing to his instability and cruelty.

The numerous non-Santo Padre Mayan groups meet at a restaurant. They suspect Canche was murdered by the Reyes brothers. Before they can agree on an action to take, the Sons of Anarchy invade, kidnapping the Mayans. Manny is taunted by Isaac before he sets him on fire. Later, it’s revealed that Terry’s patron and a member of the Sons of Anarchy is Isaac, the nemesis of Coco’s Meth Mountain scheme last season. After being shot in the neck by Coco at the end of last season, Isaac was considered dead. Manny is killed by Isaac, but another Mayan is spared referring to him as a “Judas Goat”, enabling him to function as a messenger for the approaching fire.

character was the head of Meth Mountain, and he exploited Coco’s drug addiction to force him to perform a series of dangerous duties. Coco shot Isaac in the throat in the Mayans M.C. Season 3 finale, and the villain was assumed dead. Isaac was suspected of being a member of the Sons of Anarchy due to his reaper tattoo, which sparked a slew of hypotheses.