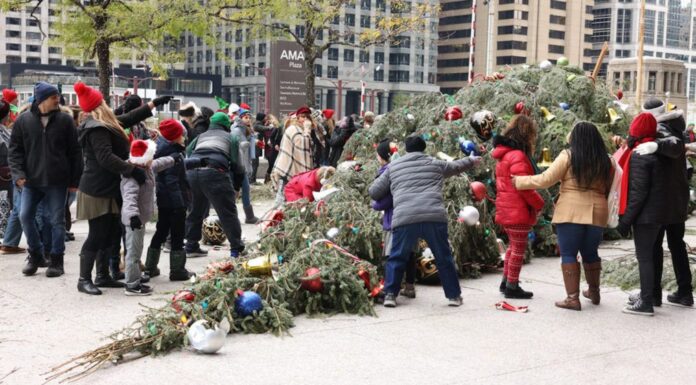 After eight episodes, NBC has taken the show on an unexpected hiatus, leaving fans perplexed. NBC opted to screen holiday programming instead of a rerun during the first week of the break. With the holiday season in full gear, Chicago fire fans are interested in what NBC has planned for the new episode of 2021. If you’re a fan of Chicago, So ready for good and terrible news. That means one more episode of Chicago Fire this year, but the season 10 winter finale will have to wait a little longer.  What’s next for Firehouse 51? At www.tvacute.com, you’ve come to the perfect place to get the Chicago Fire Season 10 Episode 9 photos and synopsis titled “Winterfest?”

As shown in the photos, firefighters hurry to the scene when a big tree falls, with branches and ornaments complicating matters. It appears to be an all-hands issue. Sylvie Brett (Kara Killmer) appears to have just returned from presenting her paramedicine program to an oversight panel in the “Winterfest” photos.

Blake Gallo (Alberto Rosende), Violet (Hanako Greensmith), and Darren Ritter (Daniel Kyri) open a microbrewery, and Firehouse 51 celebrates the holidays. There’s also Stella Kidd’s (Miranda Rae Mayo) comeback – she’s been away from Chicago with Girls on Fire — and fiancé Kelly Severide (Taylor Kinney). He revealed to Christopher Herrmann (David Eigenberg) in the last episode that he didn’t know when she’d return. “I know Girls on Fire means a lot to her, but we’ve never been this far apart,” he remarked. “I have no idea what’s going on with her or where we’ll be when she returns.” We’ll see what that means when they reunite. “For the first time in years, as long as I can remember, we’re doing a holiday episode,” Haas told TVLine. See the Christmas-themed Photos and more from the Season 10 winter finale below.

Chicago Fire Episode 10.9 Synopsis: Gallo, Violet, and Ritter debut their microbrewery business at Winterfest. Brett prepares to present her paramedicine program to an oversight panel. Firehouse 51 gets in the holiday spirit.

[Winter Finale] ‘Chicago Fire’ season 10 episode 9 will air on December 8, 2021, at 9 p.m. The programs are 42 minutes long and air every Wednesday. Where to Stream Chicago Fire S10E06 Online?  It’s also available on NBC’s official website and app. All of these services and more will be able to stream the episode. such as Fubo tv, YoutubeTV, Direct TV The episode is available on Hulu and Peacock a day later. Amazon Prime Video, iTunes, Microsoft Store, Vudu, Spectrum, and Google Play also sell or rent the episodes.