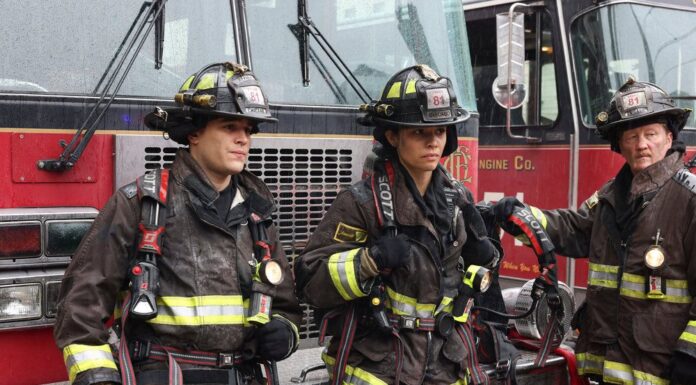 Kidd and Severide were reunited at the end of episode 9. After their return, it’s evident that they still have a lot of issues to work out in their relationship.  What’s in store for Stellaride after Kidd (Miranda Rae Mayo) made her long-awaited comeback in the episode’s winter finale. At www.tvacute.com, you’ve come to the perfect place to get the Chicago Fire Season 10 Episode 10 photos and synopsis titled “Back With a Bang?”

Season 10 Episode 10 of Chicago Fire will provide viewers additional insight into what’s to come with Stella Kidd and Kelly Severide. Meanwhile, 51 will respond to a potassium fire in a tunnel, Later in the show, Ritter (Daniel Kyri) is captivated by a young cop who witnessed a horrible tragedy. Fans get their first peek at the consequences of Kidd’s homecoming in the promo for the Chicago Fire midseason premiere, as she and Severide sit down for what appears to be an extraordinarily emotional talk.

Chicago Fire Episode 10.10 Synopsis: Stella Kidd returns to Firehouse 51; the team must work together to put out a potassium fire in a tunnel; after that incident, Ritter begins to worry about a young cop who witnessed the fiery death of a truck driver.

‘Chicago Fire’ season 10 episode 10 will air on January 5, 2022, at 9 p.m. The programs are 42 minutes long and air every Wednesday. Where to Stream Chicago Fire S10E10 Online?  It’s also available on NBC’s official website and app. All of these services and more will be able to stream the episode. such as Fubo tv, YoutubeTV, Direct TV The episode is available on Hulu and Peacock a day later. Amazon Prime Video, iTunes, Microsoft Store, Vudu, Spectrum, and Google Play also sell or rent the episodes.

the Winter Finale Episode features a Christmas tree precariously collapsing on top of holiday shoppers. As a result, they are imprisoned beneath the tree’s huge branches until assistance arrives. The Winterfest, where Gallo, Violet, and Ritter prepare to launch their new business, a microbrewery, is the episode’s second highlight. Setting it up, on the other hand, involves a significant amount of time and effort. In the way, the team encounters some unexpected obstacles.

The judges aren’t impressed with Gallo, Violet, and Ritter’s goods as they propose their proposal at the festival. As a result, it is rejected, despite the fact that other microbreweries thrive on perfection. Meanwhile, the team is rushing to help a man who is choking on a large piece of Christmas ornaments. Sylvie Brett, like a true hero, takes command of the situation. The victory, however, does not change the fact that her plea to expand the paramedic programme to their state was denied. Just when she begins to lose hope, the program’s paramedic chief-in-charge arrives with the people who have benefited from the effort.

The ensuing testimony is sufficient to overturn the judge’s decision. Sylvie’s proposal is accepted, and it’s a true Christmas miracle. Stella Kidd’s absence, on the other hand, is mentioned. She’s been missing for weeks, and not even Severide knows where she is. Since she departed, he has not communicated with her, and things are beginning to seem dismal. Surprisingly, Kidd appears in the final seconds of the programme without any prior notice or warning.