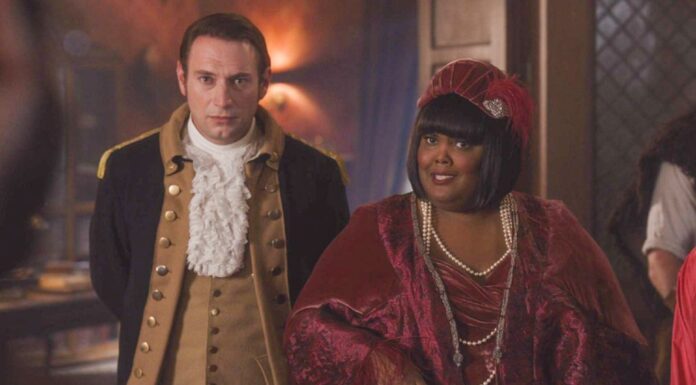 We’ve seen Thor’s, Pete’s, and Flower’s origin stories, and now it’s Isaac’s turn to shine. In the previous episode of Ghosts, his crowning achievement is a fantastic coming out tale as both a homosexual man and a murderer. This was, without a doubt, more shocking. continue reading the episode 8 recap. Fans are now eager to discover more about the latest episode of Ghosts (2021). At www.tvacute.com, you’ve come to the perfect place to get the Ghosts Season 1 Episode 9 titled “Alberta’s Fan” synopsis and trailer.

In its first season, Ghosts has nailed every single episode. In this enthralling spooky comedy, another ghost gets her chance to shine. Alberta (Danielle Pinnock), the Jazz Age diva spirit, maybe dead, but she’s not forgotten — at least not by nerdy superfan Todd (Rodrigo Fernandez-Stoll), who arrives at the estate to learn more about her life and death. When Todd begs to stay the night, Sam (Rose McIver) and Jay (Utkarsh Ambudkar) step up to put their bed-and-breakfast hosting skills to the test.

Ghosts (2021) Episode 9 Synopsis: Alberta is thrilled when a super-fan visit the mansion; Thor convinces Hetty to go on a walk that would hopefully spark a special memory.

New Series Ghosts Episode 9 will release on December 2. “Ghosts” premieres on CBS on Thursday. Each episode will premiere on Paramount+ on Thursday nights at 9 p.m. ET/8 p.m. CT, (at 8 pm on NewsChannel5.) the same day it airs on CBS. The CBS All Access app has been renamed Paramount+, and you can now watch new episodes of “Ghosts” with Live TV the day after they premiere on Hulu.

Isaac accidentally shot Nigel, a staunch adversary of the British army, while spying on him. Spotting the three British soldiers staying in the shed while demolishing it, Sam accidentally opened the door for a romance. And the ghosts assured her that Nigel and Isaac had been flirting like this for hundreds of years without making a move. It’s hardly unexpected given being part of the LGBTQ community wasn’t as welcomed back then. But Sam, who loves to play matchmaker between the ghosts, urged Isaac to finally reveal his secret. Sadly, she mistook Isaac’s confession regarding the cold-blooded murder for his affections for Nigel. While the passion crime occurred hundreds of years ago, the bitterness of death and knowing who caused it never fades. Nigel was enraged that Isaac kept it hidden. But Isaac and the other ghosts weren’t going down without a fight. After all, this is American soil, as Trevor screamed “USA” like a frat dude. A game of D&D may settle the score instead of a “Mean Girls” catfight. While Nigel and Isaac chose to end their feud before the game ended, it was the perfect time for their love to bloom. A walk around the grounds is an excellent beginning step. Meanwhile, D&D bonded Jay with the ghosts. The poor guy is stuck in this large house with only Sam, while she has a slew of personalities vying for her attention. Jay felt left out and lonely, especially after his other friends abandoned him due to his weak internet connection. How bad were they?