Get ready for Tonight! The Resident Season 5 Episode 15 – Cade’s past is revealed 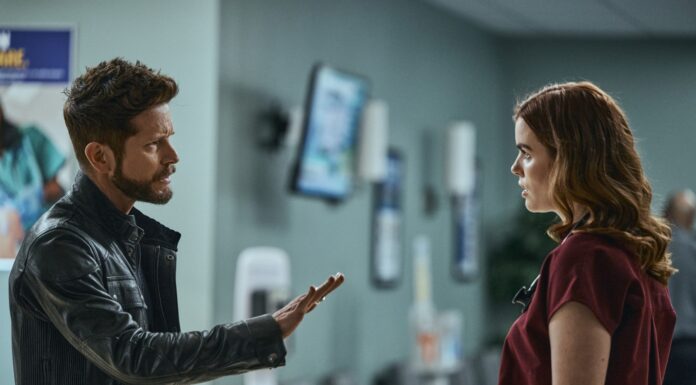 As we saw, The Resident Season 5 Episode 14 mixed up a lot of different storylines. They ranged from Jessica negotiating a better wage due to a nurse shortage to Padma’s unexpected request of Leela. Billie’s battle with Porter, on the other hand, was the most visible and captivating. Billie’s dramatic journey came to a mainly satisfying and emotional end. Read the Recap below episode 14. Let’s proceed next episode. www.tvacute.com has a promo and exclusive photos for The Resident Season 5 Episode 15 below. As a result, you’ll be able to mentally prepare yourself for the next episode.

“In for a Penny” is the title of a new episode.  In the forthcoming episode, Devon will use a novel medical fluid to heal his patient. His treatment, on the other hand, does not go as anticipated. As a result, he will have to deal with side effects from the medication. A person who has overdosed and whose name is unknown will be transported to Chastain. The patient will be treated by Conrad. However, in his search for the person’s identity, he may wind up finding a larger scandal. Dr. Conrad Hawkins (Matt Czuchry) is ready to put his diagnostic skills to work once more to solve a mystery. Yes, Cade’s history, is about to be revealed. she’s certainly concealing something, and when she reveals what she’s concealing, it’ll be surprising for everyone.

The Resident Episode 5.15 Synopsis: As his clinical begins, Devon treats his first patient with a revolutionary medical fluid that doesn’t go as planned. Meanwhile, an overdosed John Doe is rushed to Chastain, leading Conrad straight into a much bigger scandal than he expected. Then, a shocking secret regarding Cade’s past is discovered.

The Resident Season 5 Episode 15 will release on March 9, 2022, at 8 p.m. ET on Fox. The fifth season has 23 episodes, each lasting 43–45 minutes. The episodes will also be released weekly, on Tuesdays.   Online Streaming Options; If you prefer online streaming, the episode will be accessible on Fox’s official website and the Fox Now app. Season 5 Episode 11 of ‘The Resident’ will air on FuboTV, Sling TV, and DirecTV. After their release, new episodes can be rented or purchased on Vudu, Amazon Prime Video, Google Play, and iTunes. Also, the first four seasons are available on Hulu.

Conrad and AJ are working out in the park when AJ notices on social media that Billie has been appointed as the new Chief. Billie notices the unfavorable headlines as she walks to the hospital. Billie is brought up in a meeting of the board of directors. Kit, like Conrad’s father, stands up for her. The board requests that Billie take some time off.  AJ receives a warning about people discussing all of Billie’s errors.  People are slamming Billie on Twitter, and everyone is aware of the situation. Because of the scandal surrounding Billie, the board wants Kit to step down as CEO. Kit is briefly removed from the board and Bell is reinstated to face the pressure. A window cleaner has an injury and is thrown into the air. There is a nurse shortage, and many nurses are opting for traveling jobs because they pay better. When the interns and others in the rumor mill gossip about Billie, Trevor vehemently defends her.

Conrad is Billie’s confidante. Overhears the resident who has been talking about her the most. Kit is summoned to assist the window washer. Jessica is exploring a position as a travel nurse, and she informs Bell that she may be leaving. Billie’s patients are dwindling. Her procedures have all been removed. Trevor texts Billie after the resident tells him about what she overheard. Billie approaches Porter for a conversation. He rejects her terms and insists that the complaint be dropped. After her surgery, Tara the window washer has a herniated cerebellum. Jessica receives a job offer in Sacramento with a tight timeline to complete. Billie informs Bell and Kit that she wants to withdraw in order to protect her son, but she does not reveal who her son is.

Despite AJ’s best efforts, Trevor discovers who Porter is and how he is related to him. AJ tries to persuade him that his father is not a carbon copy of himself. During an operation, Billie makes an outstanding save. Jessica renegotiates better terms with BEll in order to stay with him. When Billie calls the meeting to retract her complaint, Bell and Kit turn up to support her. Trevor appears, announcing that he is Billie and Porter’s son and requesting that his DNA be tested. Padma informs Leela that she wants to have a child and requests that Leela provide her with an egg. Trevor and Billie have a conversation, and he informs her that he needs some time to analyze everything. Conrad arrives and offers to take the day off so that they may discuss and spend time together. Porter is no longer on the board, and Bell will take his place.