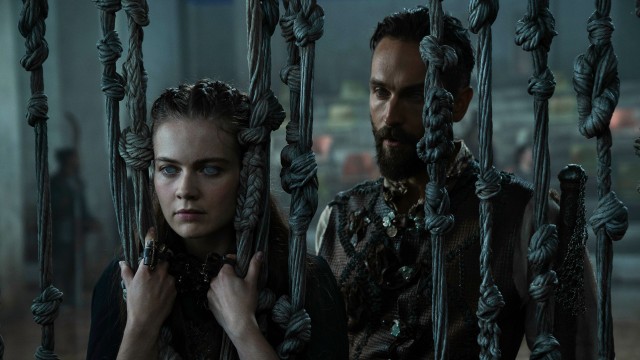 The third and final season of the post-apocalyptic fantasy adventure  SEE about a sightless civilization begins with a year’s time jump. In “Heavy Hangs the Head,” we observe how each person is doing, the mental state they are in, and their responses to the activities taking place all around them. After conquering his brother Edo, Baba Voss (Jason Momoa) has been living alone in the jungle, but for the benefit of his tribe, he must return to Paya. The catalyst was a scientific discovery of a type of sighted weaponry that might endanger the already precarious existence of the human species. This was a fantastic season debut by all accounts.  If you’ve been watching this one, finding out when the next episode will air might be of interest to you. So, no more wondering! (tvacute.com) Here is all the information you need for  See Season 3 Episode 2, including the air date, time.

There will be eight episodes in Season 3. All episodes are directed by Anders Engström. The first episode will air on August 26, 2022, and the season finale will air on October 14, 2022. See Season 3 Episode 2 will release on September 2 only on AppleTV+. you can watch the first two seasons of See only on AppleTV+.

“Watch Out for Wolves” is the title of the second episode. In this episode we will see, After suffering a terrible setback, Baba makes his way to Pennsa in order to provide a heads-up to his loved ones there. Maghra engages in a conversation over the future of the Witchfinders. Wren successfully executes a daring escape plan.

Steven Knight, who created the BAFTA-nominated television series Peaky Blinders, wrote the series, while Francis Lawrence served as executive producer.. Momoa will be joined by a star-studded cast that includes Christian Camargo and Sylvia Hoeks from Blade Runner 2049.

After the events of last year, See Season 3 Episode 1 picks up a little over eight months later. Two hundred and fifty-six days after that significant conflict, we are at the Trivantian/Granite Border. A tiny Trivantian convoy led by Wren is attacked and forced to escape after being encircled on all sides. Although Wren and her soldiers were ordered to put an end to the rebellion, it has instead escalated into a full-fledged conflict that they are losing. To make matters worse, a man by the name of Tormada arrives to mock them and inform Wren that she is losing the war. this man was a Lieutenant Commander who worked under the late General Edo Voss. He is an important person and a top scientist. He also thinks that science will usher in a new era in this situation. The following day, that science becomes apparent when 200 warriors appear prepared to attack Wren’s position. Tormada, however, remains unfazed. Dozens of bombs detonate, killing all the approaching soldiers.

Tormada and Wren through the crimson debris, dismembered limbs protruding like ugly gravestones. If he can master these explosives, Tormada is certain that he will succeed where Edo failed. He obviously wants a partnership with Wren to do that. she doesn’t really have a choice; she is effectively coerced into it. Tormada has his eyes set on the East and intends to eliminate Paya and Baba Voss. Tormada departs in search of Baba, but he leaves General Maddox. The obnoxious Queen Kane is still alive and about to give birth in the meanwhile. Maghra also attends and assists during delivery. Kane names Wolffe after his father. Following this, Tamacti Jun and Harlan spoke to Maghra about keeping up their half of the bargain. If you recall, she is required to give Kane to the Trivantians as soon as she gives birth. But Maghra ignores them and concentrates on feeding the infant. Given that the mother of his child is an insane, murdering psychopath, Kofun also rejects his child right away out of shame for what has happened.

Harlan convinces him to join him for a drink outside. now we finally get to see Baba Voss in the woods. he continues his quest after assisting a wounded wild dog. Things are tense because he has been staying with Lu for a few months. Baba is reminded that Bow Lion is also present and that he is a great leader, but he is unsure. The question of whether or not to deliver over Queen Kane to the Trivantians has come to light in light of the populace’s rebellion against her and the likelihood that it may ignite a protracted civil war. The more prevalent view is that Kane “died from problems during childbirth.” When it is revealed that the Trivantians genuinely desire a public trial, it is not acceptable to Maghra or the Trivantians in general. They desire Kane’s survival. Maghra rapidly realises that this would involve years of agony and keeping her sister alive, but it would also save their community. Tamacti Jun is disappointed when Maghra decides not to surrender Kane. As the episode comes to a close and Baba Voss finds he’s not alone. After finding him, Tormada teases Baba on the nature of death. He vows to murder his wife and children. Bow Lion steps on an explosive, though, and is sent flying as she tries to get the upper hand on the scientist.