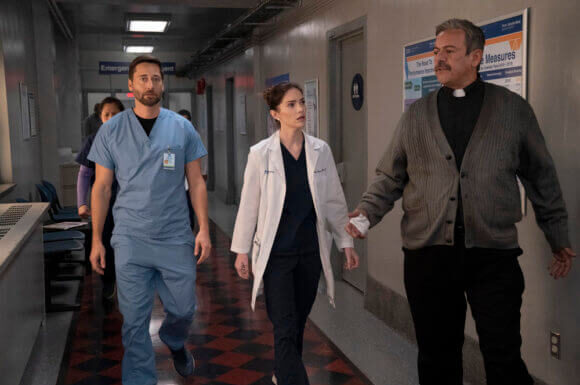 In the previous episode 8 of New Amsterdam Season 4, When New Amsterdam is hit by a large ransomware attack, Max is forced to make a difficult decision. Helen also overdosed on her patient during treatment unintentionally. In addition, Iggy and Gladys’ patient Angelo attempted suicide. What will happen after you’ve seen this episode? The first thing we tell you, only two episodes left. You may receive a preview of New Amsterdam Season 4 Episode 9 titled “In a Strange Land” Synopsis at www.tvacute.com, which will help you understand the episode better.

“In a Strange Land” is the penultimate episode. In New Amsterdam Season 4 Episode 9, the hospital administrators will vote against Veronica. Max will defy Veronica’s orders to help illegal immigrants. Sadly, a terrible fire destroyed the immigrants’ church. Veronica will try to contact the cops. And Max will force Veronica to change her mind. But she won’t let the immigrants speak. Helen and Malvo will treat a patient in danger of death. Brantley will try to make amends with Veronica, while Dr. Reynolds struggles with his new job at the hospital. Also, without Max, the hospital will be a mess. So leaving the hospital may not be the best time for Max and Helen to start over. Making decisions concerning their future will be difficult.

New Amsterdam Episode 409 Synopsis: Max takes drastic measures to help several undocumented immigrants after a fire destroys the church where they had sought refuge; Sharpe and Malvo assist a patient with a life-threatening condition; Reynolds is conflicted about his new position.

New Amsterdam Season 4 Episode 9 will release on November 16 from 10:00-11:00 p.m. ET on NBC. New Amsterdam will be available on Hulu and NBCUniversal’s own streaming platform Peacock the day after it airs on television. Note that only earlier seasons are available on the free edition of Peacock. Traditional cable/satellite pay-TV subscribers can watch New Amsterdam because it is an NBC show. A TV antenna can also take up local NBC stations. Of course, if you use newer live TV streaming providers. NBC is still prominent on major platforms including Fubo TV, Hulu with Live TV, Sling TV, Direct Stream, and YouTubeTV.

Max is walking with Helen and reminds her that they haven’t talked about a lot of topics. They went from acquaintances and coworkers to lovers traveling to London in less than 24 hours. She believes that certain questions remain unsolved. Getting to meet his parents, for example. He reveals that when he was in medical school, his parents split. His father is a jerk who drove his mother all the way to Arizona to remarry. He is adamant that they will not be visiting his father or Arizona anytime soon. He then inquires as to what she would like Luna to name her. She asked him if she was her new mommy last night as he was tucking her in. Georgia, Helen responds, is her mother. She apologizes for what happened to Georgia before he departs and thinks it’s wonderful that he’s found a way ahead. For himself as well as his daughter. Max and Luna are cleaning their teeth at home. He then informs her that since they’re going to be a family, they should give Helen a special name. It can’t be “Mommy since she’s in heaven,” he explains. Helen, on the other hand, is right there. In Helen’s home country of England, moms are referred to as Mum. Helen is overjoyed when Luna addresses her as Mum.