House of the Dragon: Is Laenor Velaryon Gay?

The audience is brought into the realm of ‘GOT’ through the experience of seeing ‘House of the Dragon.‘ The series, which is based on the book “Fire & Blood” by George R. R. Martin and was released in 2018, occurs 172 years before Daenerys Targaryen and centers on the bloody war of succession that takes place between two factions of the Targaryen dynasty, which is the governing family. The series has an important recurring character named Laenor Velaryon, who was portrayed by John Macmillan as an adult, Theo Nate as a young adult, and Matthew Carver as a youngster. He is the rightful heir to the House Velaryon of Driftmark, which was one of the most prominent houses in all of Westeros when the Targaryens, the family’s longtime oppressors, were seated on the Iron Throne. In episode 5, which is titled “We Light the Way,” it is strongly suggested that he is in a romance with Ser Joffrey Lonmouth (Solly McLeod) that is kept mostly under wraps. Everything that you need to know about it is included at (tvacute.com)

In House of the Dragon: Who is Qarl Correy?

House of the Dragon Episode 5 Recap: Who died? MURDER ON THE DANCEFLOOR

Why is Daemon Targaryen so angry with Lady Rhea Royce? Who plays Rhea Royce?

Why is Daemon Targaryen so angry with Lady Rhea Royce? Who plays Rhea Royce?

In both “House of the Dragon” and “Fire & Blood,” the character of Laenor Velaryon can be seen to have homosexual tendencies. Due to the fact that the novel is told from the points of view of a number of different characters, the nature of the relationship that exists between Laenor and Joffrey can only be conjectured. In contrast, the series establishes that the connection is in fact romantic since it does away with numerous views and instead concentrates on a linear narrative. This is because the series focuses on the events that occur in chronological order. In spite of his condition, Viserys I (Paddy Considine) navigates the stormy seas and makes his way to Driftmark in order to set up a marriage between Laenor and Rhaenyra, his daughter and heir (Emma D’Arcy as an adult and Milly Alcock as a young girl). This not only highlights how determined he is to find supporters for his daughter, but it also highlights how powerful House Velaryon now is as a whole. Laenor’s father, Corlys, is one of the world’s richest men and the second house in Westeros to have dragons. In HOTD episode 5, Laenor and Rhaenyra converse on the beach while their parents discuss the marriage. Rhaenyra has known her friend’s sexuality since childhood. They agree to complete their tasks and then enjoy their loved company. However, the issue is that not everyone involved in that equation is on board with this idea, which leads to the devastating repercussions that have been described. Criston Cole (Fabien Frankel), Rhaenyra’s lover, launches an assault on Joffrey as the King is hosting a feast to welcome the Velaryons. He kills Joffrey by beating him to death. Laenor goes to Joffrey as he lies lifeless on the ground and cries out in sorrow. 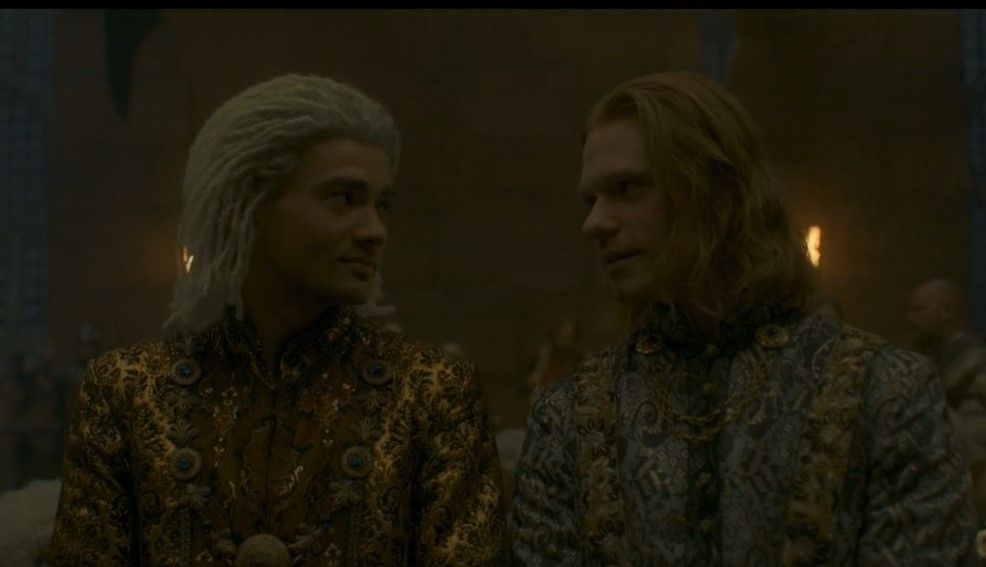 The events described in the Novels take place in a somewhat different order. The festivities surrounding the wedding, which included feasts and jousting, lasted for a full week. During the tournament, Joffrey was slain by Criston, who also injured the newly crowned champion of the princess, Ser Harwin Strong (Ryan Corr) by breaking his collarbone and shattering his elbow.  During the time that she was married to Laenor, Rhaenyra gave birth to three children: Jacaerys, Lucerys, and Joffrey. There are rumors that Ser Harwin ‘Breakbones’ Strong is their biological father due to the fact that none of them possess the typical Velaryon characteristics that their parents do. Because white actors have been cast in the roles of these three characters, there is little room left for debate about what this might mean. After the ceremony, as Laenor headed back to Driftmark, many people began to question whether or not the marriage had even been consummated. There were rumors circulating at High Tide that Laenor had formed a romantic involvement with ser Qarl Correy, a household knight.