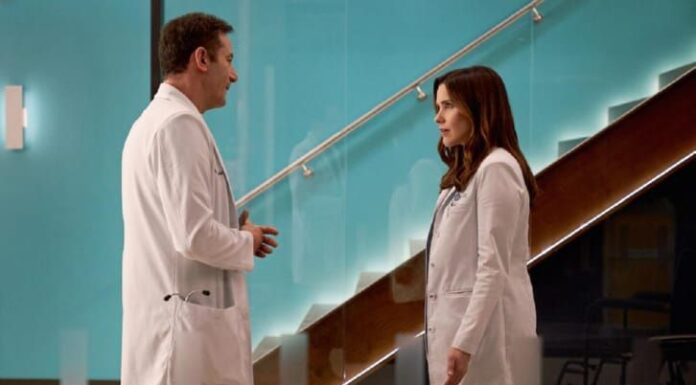 In last week’s episode of Good Sam, the fight between Sam and Griff got even more heated. At the same time, Isan lost a patient, and Lex tried to keep everyone from finding out about her and Griff. To learn more about episode 3 read the recap below. Now Fans, are you excited for the new episode of Good Sam Season 1 Episode 4, which is coming up tonight? To know more about the episode, you can check out its synopsis and promo at tvacute.com.

“Attachments” is the title of the fourth episode.  in this episode, Griff offers to mentor his daughter and ensure her position as the family’s heir.

Good Sam Episode 104 Synopsis:  When Dr. Sam Griffith tracks down a deep-pocketed anonymous hospital donor, she’s shocked to discover why the donor is so loyal to her father, Griff. Also, Griff offers to mentor his daughter and assure her succession – if he returns to his role as chief.

Good Sam Episode 4 will release on Wednesday, Jan. 26 at 10:00-11:00 PM, ET/PT on the CBS Television Network, and available to stream life and on-demand on Paramount+*.

The hospital’s lobby is hosting a donation event, and Sam and her father are attempting to schmooze the best of the best in order to establish that they have what it takes to be the superior chief. Griff insists that his daughter withdraws from the tournament. The department receives dozens of prosthetic butts, while the jokes are horrifying. Malcolm locates Sam and informs her that Griff retains signatory control over the Lakeshore account. It was never rescinded. Sam approaches Malcolm to see if he can help, but Malcolm does not want to get involved, so Sam turns to her mother. Griff is a genius. When Vivian pulls up the contract, the two discover that the butts totaled $2 million. Sam and Vivian are continuing looking for loopholes to see if they can obtain a $2 million refund, but they haven’t found anything yet.

Vivian meets with Griffin in the hopes of persuading him to return the $2 million. So, in theory, Sam will be able to return all of the butts and receive a complete refund. When the patient begins to hemorrhage, a regular appendectomy begins to go wrong. The patient bleeds out as the surgeons around him struggle to figure out what’s wrong, and the tissue begins to fall apart. It’s past the point of no return. Dr. Anders instructs Isan to dial 911, signaling that the patient has passed away.

Isan assures his patient’s family that he will discover why he died during a routine operation. He can’t come to a reasonable conclusion as he tries to figure it out, so he requests an autopsy. Isan and Caleb do the autopsy without waiting for pathology, and all Isan wants to do is prove that he’s capable of being a surgeon. After doing the autopsy, the pathologist informs them that the patient had a cancerous tumor. It’s appendiceal cancer that has progressed. Even though everything appeared to be going well for Isan, he is approached in the parking garage with a wrongful death case.

Rhonda offers to provide Sam some dirt on Griff since she wants him out of the picture, but Sam first refuses because it’s all about who can best manage the CT department. Sam is successful in obtaining a full $2 million refund from the company, but when he receives the confirmation email, he notices something is wrong. The name of the business. The Waxman Corporation is responsible for the $2 million reimbursements. Gerald Waxman is a philanthropist, multimillionaire, and entrepreneur, according to Vivian and Sam. When Sam terminated the contract, he also terminated the gift. It’s a valuable lesson for her to learn. Lex requests Sam’s permission to work on and study for a Whipple. Some residents are chatting about Lex doing the Whipple, which Sam and Lex overhear. After the Whipple, Lex sees Sam and praises her for her help earlier. Sam had been thinking about a buddy of hers. She recommends that they sit down for a glass of wine one of these nights.

Case of the Week, Tracy, 40, has chest pains and a headache, but she believes it’s not a heart attack. Maybe one of her implants burst. Her EKG shows she suffered a previous heart attack that was misdiagnosed. Tracy had multiple heart attacks, according to the echo. Tracy mistook modest heart symptoms for panic attacks. Tracy rejects the diagnosis and starts to leave, but she falls. After the cath lab, Sam, Griff, and Joey work together to find the cause.

Tracy’s previous procedures were all done by Dr. Rhonda Glass, Chief of Plastics. Rhonda reveals that she lied about Tracy’s age when she tells them about her virginity and first smoke. So Sam offers a fresh set of tests. Tracy has another heart attack, and Sam sees lesions after putting a tube in her mouth. Rhonda later talks over Tracy’s cosmetic surgeries; when she gets to varicose vein removals, Griff and Sam exchange glances. They know it’s a sickness, but it’s not age spots. Arthritis, headaches, oral lesions, SVT. Tracy has Behcet’s. Estrogen supplements exacerbate blood vessel inflammation. Tracy is feeling much better, but she still needs a friend.