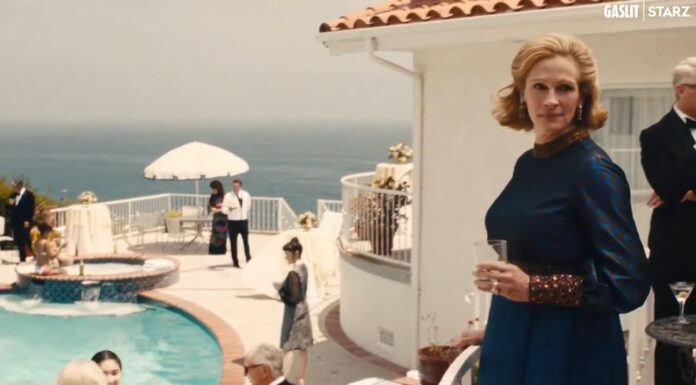 ‘Gaslit’ Episode 2 will release on Sunday, May 1, 2022, at 8 p.m. E.T. on Starz.  The Watergate operation will eventually be depicted in Episode 2, and John Mitchell will go to whatever length to ensure that Martha never discovers the truth.

In episode 1, We met Martha Mitchell, a socialite from Arkansas who is married to John Mitchell (Sean Penn), the US attorney general during Richard Nixon’s presidency. Viewers were given a glimpse of their dysfunctional marriage and relationship breakdown. To know more see the recap for episode 1 below. The anticipation of what will happen next has piqued the interest of spectators.  At www.tvacute.com, you’ve come to the perfect place.  We’ve compiled all of the officially revealed information regarding ‘Gaslit’ Season 1 Episode 2  so far, including release dates, promo, sneak peek, and more.

Gaslit Episode 4: Will Martha expose the truth about her captivity and the Watergate incident, as well as her husband?

In the second episode titled “CALIFORNIA” of ‘Gaslit,’ John Mitchell ensures that Martha never learns the truth about Watergate. Will Martha be able to piece together the puzzle and figure out what her husband’s strategy is?  The Watergate break-in begins when Martha Mitchell (Julia Roberts) and her Attorney General husband John (Sean Penn) are gone in California for a campaign fund-raiser. It goes even further off the rails than you would recall, a bungled disaster worthy of the Keystone Cops. But the GOP scheming is serious business, with one of their first orders of business being to keep the outspoken Martha in the dark at all costs. The episode was directed by Matt Ross and written by Robbie Pickering  Watch Gaslit Episode 2 Promo

Gaslit Episode 2 Synopsis:  Martha and John rekindle their love and their power-couple working relationship at a campaign event in California, overshadowed by G. Gordon Liddy and his team bungling the break-in at the Watergate.

Where to Watch Gaslit Episode 2?

Gaslit Season 1 Episode 2 will release on Sunday, May 1, 2022, at 8 p.m. E.T. on Starz. The show will continue to air once a week.  you can watch Gaslit Episode 2 on Streaming Services Such as YouTube TV, Sling tv, DirecTV, and Fubo TV. Gaslit Season 1 can also buy and rent on apple tv, iTunes, and Prime Video by even purchasing a single episode or the entire season.

G. Gordon Liddy has a soliloquy regarding the authorship of history. King’s banners are carried by soldiers. He’s linking all excellent things to Nixon, which excludes women, queers, and a slew of other groups. Five months before the break-in, in January 1972. On To Tell the Truth, Martha Mitchell appears. In John Dean’s hotel room, a naked young woman, truly young, is watching the show. Before realizing that Liddy is already in Mitchell’s office, Dean asks his secretary to locate Mo. Dean questions whether they should be discussing criminal behavior in his office casually. Martha and Mitchell had a cat-and-mouse fight. Marty recalls a day when they were both happy. She despises social gatherings. Martha notices portions of the plan on Mitchell’s bedside table while in bed. Dean tries Liddy’s candle trick for the first time. He lacks the necessary endurance. Read the full recap here.