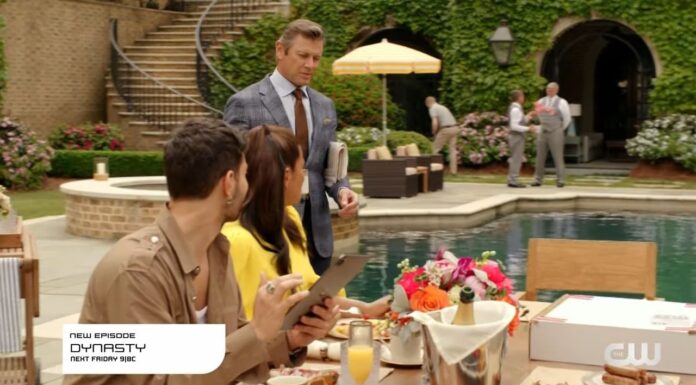 Fallon plots to turn Blake’s airport “Morell green” by bringing in environmentalists.Cristal silences her, but she makes an excellent compromise that benefits everyone. Sam is adamant that Sasha is not the appropriate lady for Culhane, and he uses tarot cards to back up his claim. it’s all that happened on Dynasty Season 5 Episode 13. Continue reading the recap below. Is it possible for Fallon and Liam to ever find peace?  If you enjoy this show and are looking forward to the next episode  www.tvacute.com brings you a promo of Dynasty Season 5 Episode 14.

Next on: Dynasty Season 5 Episode 17: A surprising guest appears

“Vicious Vendetta” is the title of the fourteenth episode of Season 5 of Dynasty. This is the 100th episode! We expect this episode to be a tremendous opportunity to showcase everything this Dynasty has to offer, whether it’s big drama or fantastic people. There’s also some major plot development here, as Fallon and Liam make a decision that could have long-term ramifications.  In this episode It is the day of Alexis’ wedding, and while she is attempting to make sure that everything runs well, it seems as though everyone else in the family has their own agenda; Blake receives a package that raises some doubts; Fallon and Liam make a decision that will change their lives forever.

Dynasty Episode 514 Synopsis:  ONE HUNDRED – It’s Alexis’ (Elaine Hendrix) wedding day and as she attempts to make sure everything runs smoothly, everyone else in the family seems to have their own agenda. Blake (Grant Show) receives a package that raises some questions, so Cristal (Daniella Alonso) and Sam (Rafael de la Fuente) set out to do some detective work to get to the bottom of it. Fallon (Elizabeth Gillies) and Liam (Adam Huber) make a life-changing decision. Dominique (Michael Michele) resorts to drastic measures to further Dom-Mystique and then asks Culhane (Robert C. Riley) for a huge favor. Kirby (Maddison Brown) becomes suspicious of Amanda (Eliza Bennett), thanks to Adam (Sam Underwood). The episode was written by Josh Reims & Christopher Fife and directed by Pascal Verschooris

According to TVLine that Charisma Carpenter will appear as a guest star on an upcoming episode of The CW’s Dynasty. She’ll play Heather, Fallon’s old babysitter who reappears unexpectedly and throws a major bombshell on the Carringtons. She’ll be featured in Episode 17. We know this is the final season, and there will be a series finale, but we’re hoping for some fun along the way.

Where to watch Dynasty Season 5 Episode 14?

Dynasty Season 5 Episode 14 will air on Friday, June 3, 2022, at 8 p.m. (ET/PT) (7 pm CT) about 45 minutes long on The CW.  You can also watch it on the official website of The CW as well as a live stream on YouTube TV, Direct tv, Amazon Prime, iTunes, and FuboTV. Season 4 of Dynasty streamed on Netflix on Friday, October 22, 2021. It will be accessible on Netflix in the UK when the season concludes, along with the previous four seasons. Naturally, since this is a post-US release, be mindful of spoilers on social media!

Fallon plots to turn Blake’s airport “Morell green” by bringing in environmentalists (along with an endangered tortoise). Cristal silences her, but she makes an excellent compromise that benefits everyone. Sam is adamant that Sasha is not the appropriate lady for Culhane, and he uses tarot cards to back up his claim. Liam and Fallon, who want to be parents, decide to attempt surrogacy. Dominique urges Jeff to reconsider his anti-corruption crusade. When Amanda and Kirby slip away on a PPA plane, they have some alone time. Laura, Liam’s wealthy mother, returns to Atlanta. She accuses her son, teases Fallon, and threatens Adam until she is killed by an overdose of cosmetic injectables, impaled on a stiletto heel.