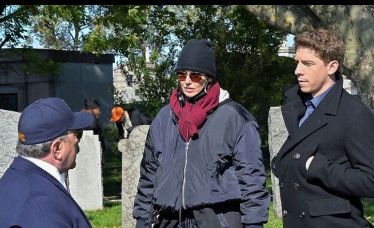 During this week’s all-new episode of Blue Bloods, tensions within the Reagan family reach an all-time high. You may expect to see us there. Bonnie Somerville guests as Joe’s mom. Bridget Moynahan directing Blue Bloods Season 13 Episode 9 will release on 6 Jan 2023. Fans are eagerly awaiting the new episode. What are your expectations for Blue Bloods season 13 episode 9?   You’ve come to the right place if you’re looking for the next new episode at www.tvacute.com.

The series star Bridget Moynahan helmed the camera for the first episode of the winter season, titled “Nothing Sacred.” As Frank Reagan (Tom Selleck) and Joe Reagan (Will Hochman), Frank’s grandson, cope with an insult to the memory of Joe’s father, there is a great deal of tension within the Reagan family. One of Blue Bloods’ most dramatic episodes to date is expected to be this one. Joe Hill never got to know his father, and Frank has never recovered from losing his son. It will be difficult for both men to visit Joe Reagan’s grave because they are working to preserve his memory.

It’s probable that Joe Hill, who works covertly, or Jamie, who handles top-secret investigations involving police personnel who might be corrupted, will learn anything ugly about Joe Reagan. Frank and Joe Hill may become closer as grandfather and grandson while repairing their late relative’s reputations. Frank’s grandchild will want to hear his son’s stories. The two think Joe Reagan was insulted, but what if he wasn’t so pure? That might confuse and depress Frank and Joe, which could lead to major drama. Additionally, Erin and Henry will collaborate, which should be enjoyable.

Henry is at his best when he is performing the limited amount of police work he is still able to perform, and this time he is well-positioned to apprehend the criminals. Erin needs his assistance in taking down a scam ring that targets elderly people. She’ll likely want Henry to pretend to be an elderly guy who is less intelligent than he actually is so they can catch the potential con artists in the act. Even while it doesn’t seem extremely risky, Henry’s family may not approve of this. Henry is frequently under Jamie’s guard, and occasionally Frank goes above and beyond to keep his father safe.

Will Jennifer Esposito appear as a special guest or will this be a new character?

Danny and Baez will look into a situation involving Danny’s ex-partner who has been out of control. Spoilers state that Danny will need to step in and stop an undercover mission. What possibly be so terrible that he has been contacted on this? Depending on the situation and the parties involved, Danny can find it difficult to manage his temper or prejudices. Before he makes a mistake, Baez might need to help him be restrained. It would be tragic if Danny’s ex-partner had any mental or emotional problems. Being forced to watch a loved one spiral out of control is never easy, especially when the person’s issues affect their ability to function or their personality.

We recommend that you have a look at the complete summary and promo for Blue Bloods Season 13 Episode 9 which can be found below. This will provide you with a few more updates now all about what the future could contain here:

Blue Bloods Episode 13.09 Synopsis:– Frank and his grandson, Joe Hill, contend with a grievous insult to the memory of Joe’s father; Erin and Henry work together to bust a scammer targeting the elderly; Eddie’s captain takes a suspicious interest in her efforts to locate a stolen puppy.

Blue Bloods S13xE09 will release on 6 January 2023 at 10 p.m. ET on CBS, It Weekly releases on Fridays with an average runtime of 42-44 minutes.  If you have a cable subscription, you may watch ‘Blue Bloods’ Season 13 Episode 09 on CBS at the hour stated. The new episodes will be available on the CBS official website as well as Paramount+ after their release. Subscribers to DirecTV, FuboTV, and YouTube TV can watch the episode live. Post-release, the episode should be available on VOD providers like Amazon Prime Video, Vudu, Google Play, and iTunes. A Hulu subscription also gives you access to the first nine seasons of the show.