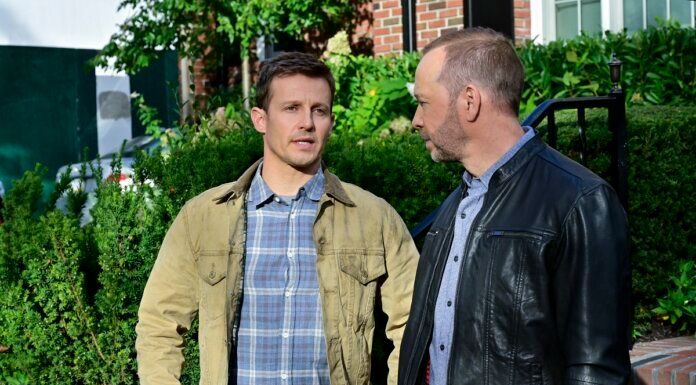 Frank and Garrett debated if this expectation includes cops being required to risk their lives when off-duty on Blue Bloods Season 13 Episode 7. Could Hayes’ attempt to stop the robbery have resulted in lives being saved? Maybe, but it may also have made things worse. The case itself was peculiar and came to an abrupt end. The rationale behind Grace’s boyfriend’s involvement in the heist plot was absurd. . For a detailed explanation of everything that happened in Blue Bloods Season 13 Episode 7 Recap continue reading at tvacute.com.

Officer Hayes is inside a diner sipping coffee when the episode starts. A man demands money from the cashier while brandishing a revolver and wearing a mask over his face. As she enters from the kitchen and notices the shooter, the waitress drops all the plates on his path, distracting him. All of the customers begin to hide as shots are fired. Hayes dials 911 while off duty and using his cellphone. A woman gets hit by a car elsewhere, and a witness claims that she was pushed into the road. Another claims that a crazed man simply shoved her, fled, and laughed the entire while. Jamie is already there and Maria and Danny are working a case. Adam Reynolds and Grace Mitchell, a couple in a committed relationship, are the victims. He was assaulted as two guys robbed her.

A woman is lying on the floor in a pool of blood at a dance studio as Erin is working on another case. There is only one eyewitness, a small girl named Sophia who was taking a private dance instruction from Ms. Patty. Sophia is there, but Anthony won’t let her speak; he just assures Erin that she didn’t see anything and that he’s taking her home. Frank asks Hayes about the shooting in the diner when he calls him in. Frank claims that he was armed and questions why he refrained from getting involved. One individual passed away, and an ICU patient is a 12-year-old child. Hayes refuses to speak, claiming that his report has all the information. Frank wants to take another close look at the security footage after Hayes leaves because he believes there is an issue. Frank believes that he ought to be fired for staying out of it.

Frank and Garrett argue over whether Hayes should be fired because he was off-duty. Frank believes that Hayes should be dismissed. When she wouldn’t let go of her bag during Danny and Maria’s interview with Grace and Adam, one of the men struck her in the face while the other started kicking her. One of Grace’s credit cards was used, and Jamie informs Danny and Maria that they have the person responsible. Anthony is enraged when he learns that Sophia is seeing a therapist as a result of what she endured; Erin made the arrangements. Erin is approached by Anthony, who tells her he is angry and that she had no right to be unhappy. He needs to come in and identify the culprit, Patty’s ex-boyfriend, she informs him, because Sophia was the only witness to the murder. Anthony becomes even more irate.

She informs Luis that Eddie has a facial recognition match for Michael Harris, the man who pushed the woman in front of the automobile and that he has a history of criminal activity. Sophia received a subpoena and is even more irate when Anthony returns to see Erin. When Danny and Maria question the person who used the credit card, he says Adam, Grace’s boyfriend, paid him and a partner to attack the woman. Sophia enters Erin’s office, and Erin informs Anthony that he must leave because he is her father and shuts the door behind him. When Adam is questioned, he claims otherwise. They weren’t meant to attack, he claimed, so he didn’t do anything to harm her. He was to play the role of the hero, and if they pretended to be together, she wouldn’t leave him. He didn’t want to lose her when one of her friends informed him that she was becoming bored.

Before Adam is hauled away after being detained, his girlfriend rips him a new one about how pitiful he is. When Erin approaches Anthony in a pub and sits down to talk to him, he informs her that Sophia provided extensive information about the murder and named the ex-boyfriend who is currently in custody. She expresses her disappointment in him, saying that it stung that he didn’t believe she had Sophia’s best interests at heart. Erin is there and they are talking as Danny and Jamie are standing outside the home. Without Jamie, according to Danny, his case couldn’t have been resolved. Then Danny admits to Jamie that he may occasionally be a pain in the ass. This discussion resulted in Danny having more direct communication with his brother outside the family home, and this moment of self-reflection was really helpful. It also provided us with the memorable phrase, “No one wants to apologize to Reagan—they make it impossible.”

Frank claims that he moved Hayes to a different station without disciplining him during supper. According to Frank, a brave person is one who faces their fears head-on. Frank claims that he was working on his character. Walking Sophia out, Erin remarks that it wasn’t as frightening as she had anticipated. There, Patty’s daughter also thanks, Sophia. Sophia gives Erin a hug as Anthony comes to fetch her up. When Garrett and Frank go out for a drink, Garrett informs Frank that Hayes has submitted a grievance to the union. Garrett claims he is aware that, if he had been in the diner, he would have reacted, but his family might have been present at his burial. On this, Frank and Garrett won’t be in agreement. Frank, according to Garrett, has idealized police work. Anthony apologizes to Erin and explains that he was only attempting to defend Sophia. He owes her dinner, but she claims she forgives him.