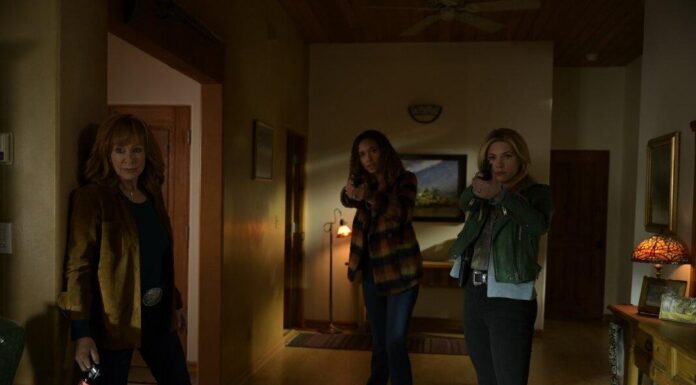 Only a handful of the unexpected developments in Big Sky Season 3 Episode 12 were Buck’s survival and that crazy shootout. This was the last feast before the final one. there was foreshadowing in virtually every scene, we were all aware that we were building up to something bad happening to Emily. Because of this, it was extremely frustrating to watch her out and about while her stepfather was actively associated with career murderers and her father had just killed one of these career killers. For a detailed explanation of everything that happened in the Big Sky Season, 3 Episode 12  Recap continue reading at tvacute.com.

When Sunny Barnes (Reba McEntire) gets back to her house, she finds blood all over the place. After that, Paige confesses who she is and makes an attempt to assassinate Sunny. The next thing you know, Jenny and Cassie (Kylie Bunbury) have arrived, and Paige has been sent to the hospital while Sunny has been taken to jail. Before speaking to Sunny, Poppernak discusses Winston with Beau (Jensen Ackles) and obtains information about him. She advises him that now that they are aware that Paige is still alive, Walter ought to be set free. Jenny is told by Paige that she was told at the bunker that Buck (Rex Linn) took her to that there were hearts preserved in jars. Emily (Cree Cicchino), Denise (Dedee Pfeiffer), and Cassie get their search for Buck’s bunker underway by doing some preliminary research. Donno quickly eliminates the threat posed by the man who came to torment Avery (Henry Ian Cusick). Cassie shares her knowledge of Buck with Cormac, and he assists her in filling out the map so that they can locate Buck’s hideout.

Sunny is the one who comes to fetch Walter once he is freed from prison, and she tells him that they need to work on a strategy for the future together. Cassie, Jenny, and Beau were able to locate the bunker, but Buck was nowhere to be seen. In the neighboring woods, a guy and his dog come across a Buck that is severely injured. After killing the man, Buck drives his truck to a local convenience shop where he gets some adhesive to patch his wounds and then continues on his way. Sunny has the plan to run off with Walter, but he resists her, and also what she learns regarding Buck. Sunny has the plan to escape away with Walter. After that, he gives her a hug and parts ways with her. Carla approaches Tex while she is following him on her way to the cleaners, but Tex ignores her and continues following Carla. Tony is keeping an eye on Dewell and Hoyt in another place. Sunny is informed by Jenny (Katheryn Winnick) and Poppernak, who pays her a visit, that Buck is, in fact, still alive.

Walter pays Paige (Madalyn Horcher) a visit, and during their conversation, she reveals to him that Buck is still alive. Carla reveals to Beau that she was followed, and when they go looking for Emily, Cassie informs them that she and Denise aren’t at the workplace. Carla and Beau then continue their search for Emily. The fact that Denise and Emily have gone missing prompts Beau to confront Avery. The following evening, Avery tells him that he has a meeting scheduled with Tony, and Beau reveals to him that he is wired up. If Donno and Tonya comply with the plan to safeguard Avery and ensure that Emily and Denise are not harmed, Beau guarantees that they will not be arrested. After Tony killed Avery, things at the meeting quickly got out of hand and were difficult to control. Following Donno’s shooting, Beau questions Tony about Emily, but the latter insists that he does not have her in his possession when the police come. It is disclosed that Buck is in possession of Emily and Denise and that he has the two of them restrained in a vehicle that he refers to as Sunny.