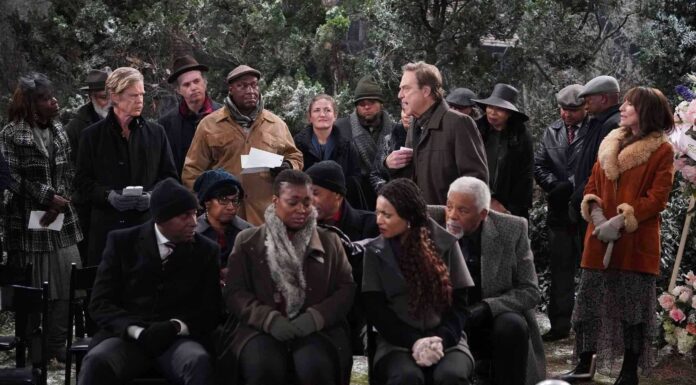 The Conner family still has to deal with the hardships of everyday life in Lanford. Dan, Jackie, Darlene, and Becky, a classic American family, deal with parenthood, romance, money woes, and growing old in the middle of the Great Depression. Amidst disagreements, coupon-clipping, hand-me-downs, and emotional breakdowns, the family pulls together and finds success because of their love, humor, and resiliency.  In The Conners Season, 5 Episode 11, Dan (John Goodman) and Jackie’s high school teacher pass away, and it pulls together their former classmates.  Rosie’s ex-boyfriend and Jackie’s former high school crush Smitty Cusamano, played by William H. Macy returns Lanford.

The passing of a cherished instructor brought together a group of former students. Dan is happy to see Smitty, but Jackie (Laurie Metcalf) is even happier because she had a huge crush on him back when he was dating Roseanne before she started dating Dan. he is as excited to see her as she is to see him. Smitty Cusamano tried to introduce himself to Darlene and Becky as the potential father of their children. After leaving Lanford, Smitty Cusamano went on to amass a sizeable wealth in the pool supply industry and eventually became very successful. However, in the past, he was similar to Dan in that he was also a blue-collar kid who had a crush on Roseanne. He even embarrassed himself by taking Roseanne to the reunion, only to find out that she was going home with Dan.

Even after half a century, Smitty has not gotten over his resentment. He gives Dan a payment of $6,000 to help with the home loan, and then he goes around The Lobo telling everyone that Dan scammed him out of the money. Those who watched the first series of “Roseanne” in the ’90s may also know the bar. The Lobo was a popular hangout in the first season. Smitty is uninterested in getting into a fistfight, despite Dan’s adamant insistence that one take place. Instead, he makes a reward of $2,000 available to anyone who is willing to engage Dan in combat on his behalf. After that, Bobo, who was last seen in Roseanne Season 1 when Dan knocked out his lights, stages.  Jackie, a former law enforcement officer, is fortunately present to help Dan by bringing up Bobo’s lengthy criminal record. Simply hearing that is enough for the roided-up bully to retreat from the situation.

After some time has passed, Dan admits to Louise that he is envious of Smitty. Smitty was unsuccessful in his pursuit of the girl, and yet he really does go on to establish a successful business empire. Dan, on the other hand, is not yet able to meet all of his financial obligations. Dan is given a note that he started writing to his future self when he was in high school. The letter is presented to him the following day at the funeral of their teacher. It turns out that this is exactly the pick-me-up that he requires. After finishing it, he comes to the conclusion that he was, in fact, successful in life. Even though he did not have a secure financial situation, he was able to take comfort in the fact that he had turned out to be a better parent than his own father. It is also important to point out that Dan does, in fact, pay the mortgage with Smitty’s check that he cashed. Smitty needs to confront him about that now, but he remains calm throughout the conversation. He makes his way to the Conner home in order to make amends to Dan for his earlier actions,.