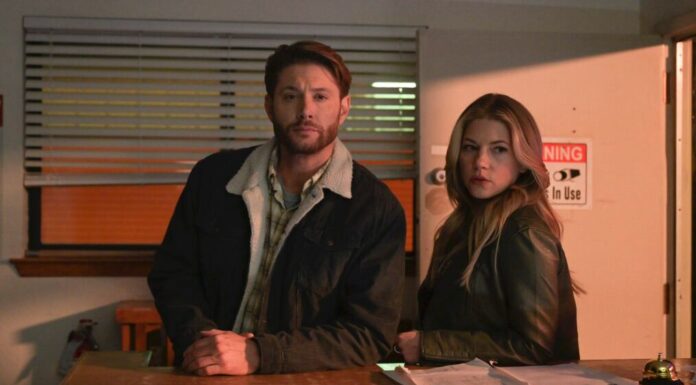 The tension on the Montana-based thriller Big Sky: Deadly Trails, which is wrapping up its third season with a showdown between Emily’s father, sheriff Beau (Jensen Ackles), and Jenny (Katheryn Winnick), who is helping him track down Denise (Dedee Pfeiffer) and Emily (Cree Cicchino) after the Bleeding Heart Killer kidnapped them. And don’t think for a second that Reba McEntire, in her role as the beleaguered Sunny, will leave Big Sky without making one final flamboyant gesture. For a detailed explanation of everything that happened in the Big Sky Season, 3 Episode 13  Recap continue reading at tvacute.com.

Will Jensen Ackles leave Big Sky after the finale?

Buck (Rex Linn), in search of a new vehicle, pulls into a Hammerhead bar, where he murders a man who comes to their aid after hearing Emily (Cree Cicchino) and Denise screaming from inside the truck. A fatal blow to Buck’s noggin from the car’s dashboard. Buck grabs the keys to the pickup truck and trailer that he has been given. Buck pulls over to get some gas. Together, Emily and Denise unearth a Swiss Army knife. When Emily tells Buck that her father will discover them, he tries to provide them with water, but she warns him that he will be killed. Denise goes for the knife, but he manages to block her.

RT if this scene has you screaming, crying, throwing up. 😭 #BigSky pic.twitter.com/tSvDE4MeHt

Simultaneously, Carla (Angelique Cabral) visits the bar where Avery was shot dead. Beau consoles her. He reveals to her that everyone believes Emily is in Buck’s grasp. but he pledges to bring her home. Then Jenny finds out some information about Buck’s whereabouts at the wayside pub. Apparently, Buck was spotted and killed a man. Beau gives Cassie (Kylie Bunbury) a call and asks her to join the search. As Cassie enters, the two of them observe Buck in the parking lot, as captured by the CCTV cameras. They notice he misplaced his keys, so they send them to the lab to be improved. When Walter (Seth Gabel) visits Sunny, he proposes murdering Buck. Nonetheless, she assures the deputy that she has a plan and sneaks away from him to confront her husband.

However, Jenny and Beau stop Sunny and bring her in for questioning at the station. “We located Buck’s bunker. “He’s the Bleeding Heart Killer,” Beau explains to her. She mutters, “I know.” She alleges that Buck sought her help in escaping, but she wasn’t interested; instead, she was on her way to convince him to turn himself in when they found her.

So Beau and Jenny, with Sunny riding shotgun, drive to an abandoned structure that has a sketchy appearance and arrange a meeting with Buck there. Buck is going to leave with Sunny as soon as the brief discussion is finished, but he has made a hazy commitment to phone the location of the detainees when he is a significant distance away. Beau is irate and on the verge of losing it, but he can not see any other way out of this predicament.

While they are driving, Buck instructs Sunny to throw away the tracker that was given to her by the sheriff’s office. He then proceeds to go on and on about how all he wants is for them “to be us again.” He wants to know if she will ever be able to forgive him. She responds by saying that she will take it into consideration if “you do the right thing and give those women back.” He initially objects, but then he instructs her to phone Beau and provide him with the details of the location of the women. After that, he orders her to throw her phone out of the car window. Jenny, Beau, and several members of the sheriff’s department are led to a place by Buck that turns out to be a trap. The trailer that Buck led them to is loaded with bombs, and it blows up as they draw closer to it. What’s the upbeat report? The body found inside was one of the bar patrons whom Buck had previously killed.

Rex and Jensen in this scene… woah #bigsky pic.twitter.com/F5e9hhwfVr

Sunny asks Buck to bring her to the place where he proposed to her, and while they are there, she recalls him that he did not keep the commitment he made to her many years ago. This takes place somewhere else. She continues, “I gave you everything, and I believed I understood what type of man you were, but I was wrong.” “I was wrong because I gave you everything.” He promises that he will evolve. He expresses his regret. However, she has no interest in it. She draws him in close and gives him a kiss, after which she declares, “That was my last kiss.”

Walter arrives with a knife, and a battle ensues between the two of them. Buck grabs a large boulder and uses it to severely injure Walter’s face. After that, Beau makes a run at Buck, and the two of them end up falling down a slope. After a struggle with yet one more knife that Buck had concealed in his shoe, Beau almost strangles him as he wants to know where Emily is. Buck had been keeping the knives hidden in his boot. Jenny’s timely presence is the only thing that prevents him from killing the man. She pulls the sheriff off of the elderly man, preventing him from doing so. However, Sunny has finally So much of that. She kills Buck by pointing a gun at him and shooting him. Jenny comes in quickly to tie her, and Beau appears to be rendered speechless as he understands that their final link to Emily’s location has been severed.

this was insane of Beau 😭 #bigsky pic.twitter.com/5xnwGJaJw5

Cormac remembers the key ring that Buck is wearing since it was the one that was used to unlock the gate to the property where they used to go hunting. This information is gleaned from a detail in the surveillance video taken in the parking lot of the bar. Therefore, Cormac takes Cassie to the hunting grounds that belonged to his father. They are at a cabin on the property when she receives the call from Jenny, and it is at that time that she informs Cormac that Buck has passed away. He remembers there being an old mine tunnel on the site, and that’s where the two of them locate Denise and Emily, who are scared but otherwise fine. Emily immediately runs into Beau’s arms as quickly as he arrives, and Jenny immediately hugs Denise. In the meantime, Beau cuddles Emily.

When they got back to the station, Sunny was taken into custody. We find out that Walter will live, and that when he gets better, he won’t be in a significant amount of legal trouble. Sunny makes it apparent that she is not regretful for what she did and asks Jenny and Cassie to watch after her boys. She also makes it clear that she is not sorry for what she did by saying, “Some bills you’ve just got to pay yourself no matter the cost.” Cassie gives Cormac a kiss later, just before he heads to the hospital to sit by Walter’s bedside.

Donno is still alive, albeit being in a bit of a poor shape. Tonya takes him to the diner, where she agrees to make him grilled cheese and also presents him with a stuffed white horse named Gandalf. She expresses regret for succumbing to her avarice and failing to listen to his advice. He disregards that and instead draws attention to the fact that she kissed him when she believed he was going to die.   She then takes his hand and says, “We make a good team,” after whispering that the money that everyone had been seeking for the entirety of the season is now theirs.

When Beau stops by Jenny’s later that evening, she welcomes him inside for a drink and a beer. He has informed me that Carla and Emily will be relocating to Houston, but he is unsure of what his own plans are at this time. He expresses his gratitude to her “for everything” before placing his hands on her knee. She takes his hand and gazes adoringly in his direction as she does so.