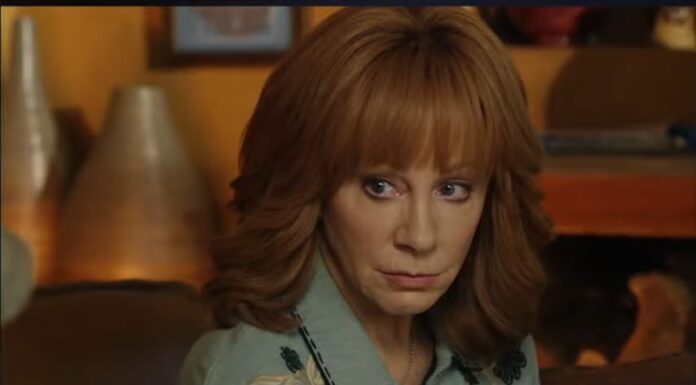 Big Sky season 3 returns on ABC after a brief hiatus for the holidays! The focus of tonight’s show is family. Sunny hasn’t given Buck’s behaviors much attention up to this point. while Sunny (Reba McEntire) and the even more cunning Paige (Madalyn Horcher) find the dreadful truth about Buck (Rex Linn). Jenny (Katheryn Winnick), who is often sidetracked, is preoccupied with the reappearance of her own shady mother, Gigi (Rosanna Arquette).  For a detailed explanation of everything that happened in the Big Sky Season 3 Episode 11  Recap continue reading at tvacute.com.

A beaten Gigi shows up at Jenny’s house and tells her that she scammed the wrong guy and that his scary family is hunting her. Jenny isn’t persuaded, but after long two men break into her house, knock her out, and grab Gigi. Now that Cassie is aware that Buck is the father of Sunny’s boy, she confronts Buck. Unfortunately, Cassie is drawn away when Jenny calls, breaking a vase and making noise at the same time. Sunny tells Buck that she has found Paige and requests his assistance in her search. Sunny notices that Buck has been drinking when he plays stupid and declines. He says he has matters to take care of as he drives away. In the truck bed of his vehicle is Paige’s body. In their search for Gigi, Beau, Poppernak, Jenny, and Cassie learn that she laundered the $30,000 she stole. That points them toward Donno and Tonya, who cleaned up the money and dumped it in a box on a piece of property.

Avery is being held at gunpoint by Winston when Beau traces him to a hotel. Winston is later killed by Beau, who also arrests Avery. Beau is then informed by Avery that he has put everyone in danger. When Jenny and Cassie get at the property where Donno left the money, Anne the owner informs them that she is unaware of what happened. The two begin poking around the property since they don’t believe her. Jenny discovers Gigi being kept hostage by men in front of little children. She learns that their brother was defrauded by Gigi, and that he later committed himself. When Anne arrives, she informs the group that they will be playing a game to choose who survives and who perishes. As a result, Jenny beats her mother in a game of cornhole. However, Anne spares them despite her dead son’s daughter’s pleas for compassion. Then the police arrive to detain everyone. Jenny then arranges for Gigi’s arrest. The scene changes to Buck in a dank, dark barn with Paige’s body lying on the floor. Jars with hearts within that were labeled with the names of women—likely the victims of the Bleeding Heart Murderer—were found.

When Buck looks down to discover Paige gone, she had just smacked him in the knee while he is writing Paige’s name on a jar. Avery is imprisoned by Donno and Tonya, but he offers to give them a sizable amount of money in exchange for their protection. Cassie intends to bring Sunny in after speaking with Cormac, so Denise at Dewell & Hoyt sends Emily down the corner to grab some coffee. The supervisor of Avery confronts Emily in the coffee shop (in an extremely creepy way). She takes her caffeine treasures and heads back after seeing something is wrong. One of the lackeys of the boss from the bar follows her in a car as she leaves. The display turns off.