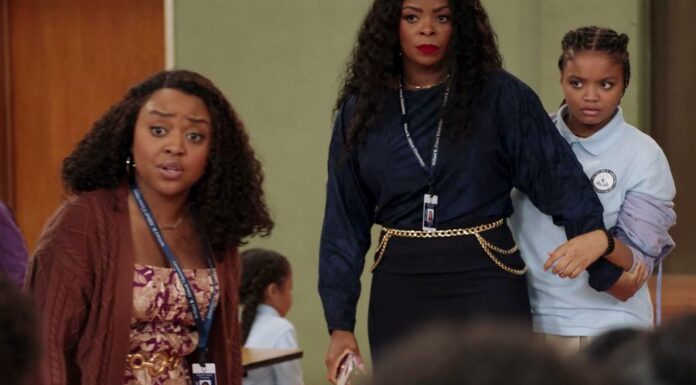 Abbott Elementary Season 2 Episode 12 will release on Wednesday, January 11, 2023.  The teachers and staff at Abbott Elementary School find themselves in the position of having to learn lessons in teamwork during a day that has both a touchdown and a failed play.  You may see a synopsis and promo of the episode at www.tvacute.com, which will help you better comprehend the show.

First, and foremost, congratulations to Quinta Brunson who won the Golden Globe Award for Best Performance by an Actress in a Television Series, Musical, or Comedy for her performance in Abbott Elementary. In tonight’s episode titled “Fight” Melissa (Lisa Ann Walter) and Ava (Janelle James) are otherwise engaged, hatching a plan to defeat Mr. Johnson (William Stanford Davis) in fantasy football while Janine (Quinta Brunson), an idealistic teacher, seeks the assistance of her colleagues in order to assist two of her students in learning how to get along with one another. Jordan Temple wrote the screenplay for “Fight,” which Melissa Kosar directed.  Go ahead and read out the complete synopsis for Abbott Elementary Season 2 Episode 12 to gain a few more details today about what you could see:

What Mr. Johnson said. 😤 Don't get on anyone's bad side – Watch #AbbottElementary tonight at 9/8c on ABC & Stream on Hulu! pic.twitter.com/XtLbL85rbL

Two of Janine’s students aren’t getting along, leading her to seek advice from her colleagues on how to help repair their friendship; Melissa and Ava plot to bring down Mr. Johnson in fantasy football.

Abbott Elementary Season 2 Episode 12 will release on Wednesday, January 11, 2023, from 9:00-9:31 p.m. EST, on ABC. Watch episodes on demand and on Hulu the day following their premieres. With a current membership to over streaming service that broadcasts ABC, such as fuboTV, Hulu + Live TV, Sling TV, DIRECTV TV, or YouTube TV, you may also watch new episodes live. The first season of the show appears to have a total of 13 episodes planned.