Are You ready for The Conners Season 5 Episode 11: A Roseanne’s Character Returns 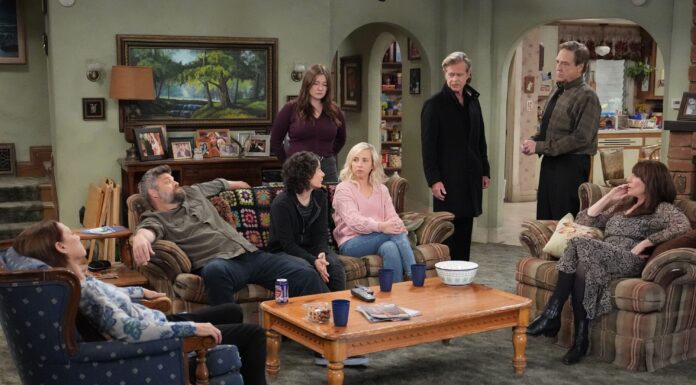 The Conners Season 5 Episode 11 will air on Jan 11. After the passing of a beloved instructor, Dan (John Goodman) and Jackie (Laurie Metcalf) gather with their old high school friends for “old home week.” you might be interested in learning what’s store. So, stop wondering now! You can see www.tvacute.com’s synopsis, and promo for The Conners Season 5 Show 11 below, which will help you better understand the episode.

When The Conners’ creators revealed that a Roseanne character would return in the spinoff’s fifth season, viewers had a hard time figuring out who the mystery cast member would be. Bobo’s return makes sense for The Conners season 5. It’s clear that the worlds of Roseanne and The Conners are still connected. the fifth season of the show decided to bring back Bobo, a one-episode supporting character played by Eric Allan Kramer who Dan once got into a fight. In Roseanne season 1, episode 9, Bobo and Dan had a confrontation, and the character was never again referenced. However, he will soon make a comeback in episode 11 of season 5 of The Conners.  The Conners Season 5 Episode 11 is called “Two More Years and a Stolen Rose.” In this midseason debut, the legendary Conner family continues to struggle with the challenges of parenthood, dating, and financial demands. The death of a much-loved teacher from Dan (John Goodman) and Jackie’s (Laurie Metcalf) high school brings together former classmates.

The biggest newcomer thus far this season has been Shameless alum Ethan Cutkosky, who was cast as Neville and Louise’s nephew Caleb, resulting in Emma Kenney‘s first co-star reunion. William H. Macy, another notable Shameless alum, is now joining the ABC sitcom.  According to TVLine, the Emmy-winning and Oscar-nominated actor will appear in The Conners Season 5 at an unspecified future date. Although the exact date is unknown, we do know who Macy will be playing. He’ll appear at some time as Smitty, a figure who was a close friend of Dan’s in high school.

➡️ @WilliamHMacy has payback in mind on an all new #TheConners TONIGHT on ABC! pic.twitter.com/ZxWehOIBlC

The Conners Episode 5.11 Synopsis: The death of a beloved teacher from Dan and Jackie’s high school brings old classmates together; Becky asks Darlene and Ben for a big favour.

The Conners Season 5 Episode 11 will be released on ABC on Wednesday, Jan 11, 2023, airing at 8/7c. in the network’s Wednesday time slot. The season will begin with a live episode, with the subsequent episodes being taped again. The most recent episodes of The Conners will be accessible the next day on ABC.com or Hulu. live TV streaming services such as Fubo TV, Hulu with Live TV, and YouTube TV. ‘The Conners’ is available on iTunes, Amazon Prime Video, Google Play, or Vudu.