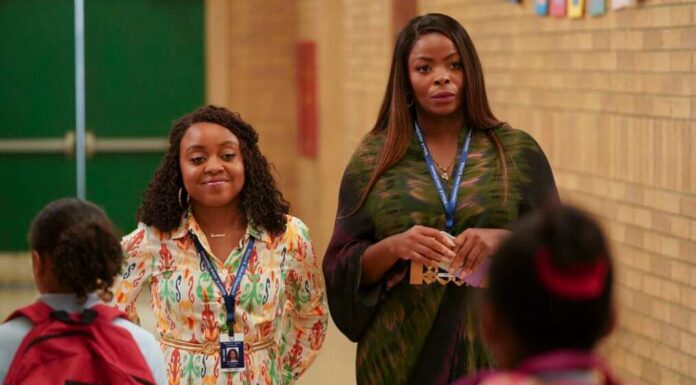 Even though it was an energetic and enjoyable episode, Abbott Elementary Season 2 Episode 12 did not in any way explore a love storyline. Throughout the entirety of the show, Janine and Gregory were involved in completely distinct storylines. However, the episode included the return of Orlando Jones, whom fans of Everybody Hates Chris from his days as a child star had long since pegged as Tyler James Williams‘ adult lookalike. The 12th episode saw the return of his tyrannical father for a massive landscaping project. What lies ahead?   you are curious to learn more about Abbott Elementary’s new episodes. Allow www.tvacute.com to supply you with all of the information you’ll need to watch the latest episode 13 of ‘Abbott Elementary Season 2′.

In tonight’s episode “Fundraiser”, in which the schoolteacher tries to raise money by selling candy to pay for a field trip to the museum, fails and promises to be a humorous confrontation between Barbara (Sheryl Lee Ralph) and principal Ava (Janelle James). The flamboyant Ava is more than ready to step in and has her own marketing strategies. Jacob (Chris Perfetti) and Mr. Johnson (William Stanford Davis) argue about what should happen to a cat that was discovered in the janitor’s closet elsewhere on the school grounds. Randall Einhorn was the director of “Fundraiser,” which was written by Brittani Nichols. Go ahead and read out the complete synopsis for Abbott Elementary Season 2 Episode 13 to gain a few more details today about what you could see:

Gotta do whatcha gotta do to make that field trip money! 💃 Don't miss a new #AbbottElementary tomorrow at 9/8c on ABC and Stream on Hulu! pic.twitter.com/NZQjL4bh81

Barbara organizes a candy-selling fundraiser to raise money for a school field trip to the science museum. When sales don’t go as planned, Ava steps in to teach the students new, unconventional selling tactics. Elsewhere, Mr. Johnson and Jacob butt head about how to take care of a cat found in the janitor’s closet.

Abbott Elementary Season 2 Episode 13 will release on Wednesday, January 18, 2023, from 9:00-9:31 p.m. EST, on ABC. There will be 22 episodes in the season. Watch episodes on demand and on Hulu the day following their premieres. With a current membership to streaming services that broadcasts ABC, such as fuboTV, Hulu + Live TV, Sling TV, DIRECTV TV, or YouTube TV, you may also watch new episodes live.

The formerly undervalued teachers at Abbott Elementary are no longer underdogs; most recently, they won prizes at the Critics’ Choice Awards and the Golden Globes.  The show has officially been renewed for a third season at ABC after winning three awards at the Golden Globes on Tuesday, including best TV comedy.

The secret's out! We can't wait to see you all again for #AbbottElementary Season 3 🎉 pic.twitter.com/LsEuYDrkkp