Why is this enigmatic she-dragon significant to the Game of Thrones spinoff HOTD? Who is VHAGAR? 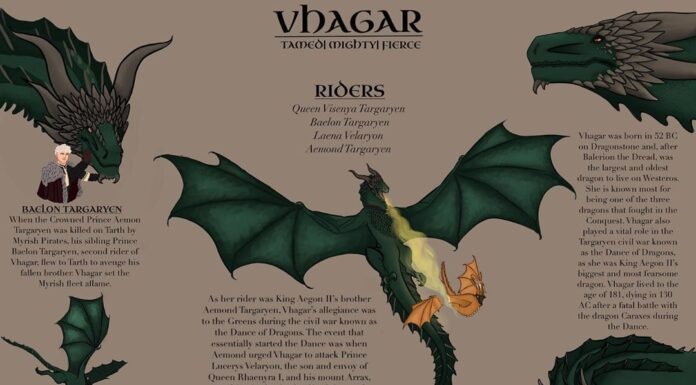 Vhagar was definitely the most frightening dragon of them all, and many kings and queens rode him.

In the world of “Game of Thrones,” Vhagar “is not” the largest Dragon, let’s be clear about that. Balerion, who is regarded as the Greatest Dragon who has ever lived, is the one who accomplished that remarkable feat. However, Vhagar is the largest Dragon in the HBO adaption because it has been established by some of the shots in the most current trailer that Balerion has passed away. Vhagar is the largest “living” Dragon in the “HOTD” universe as a result.

The majority of the gigantic dragons’ remains, which were preserved as a metaphor for the dangers of power and prowled Westeros’ sky at the height of the Targaryen reign, can be found beneath King’s Landing. One of these skulls is also visible in House of the Dragon Episode 1 when King Viserys I Targaryen (Paddy Considine) discusses the prophecy of “a song of ice and fire” with his daughter Princess Rhaenyra Targaryen (Milly Alcock). Vhagar’s passing happened after House of the Dragon, although Belarion’s did not. Viserys worries about her being AWOL in Episode 2, but who is this mysterious dragon and why is she so crucial to the storyline of HBO’s spinoff series? (tvacute.com) Here are we to explain everything.

House of the Dragon: Which dragon can Rhaena claim to be?

Vhagar was named after the god of the Valyrian Freehold and was born from a dragon egg on Dragonstone during the Century of Blood. Before she wedded Aegon, Queen Visenya demonstrated her ability as a Dragon rider. She was the first person to ever mount an animal. Long-riding Vhagar was employed by Visenya to ignite the ships of the Arryn fleet, which captured one-third of the Targaryen fleet. Vhagar gave the flames to start the fire of King Aegon I’s funeral pyre when he passed away in 37 AC. In 44 AC, Visenya passed away on Dragonstone, leaving Vhagar without a rider.

After Visenya’s passing, Vhagar was left unridden for 29 years. Prince Baelon the Brave finally mounted the dragon in 73 AC. Vhagar was the last of the three Targaryen dragons to participate in the Conquest when Balerion passed away in 94 AC. When Prince Baelon passed away in 101 A.D., he lost his rider once more. By 129 AC, Vhagar had grown to almost Balerion’s size and was the largest dragon still alive. Aemond Targaryen began riding the dragon at the “Dance of the Dragons” and forged an incredible bond with her. Throughout the civil war between King Aegon II and Queen Rhaenyra, Aemond continued to fly Vhagar in combat. She was the only dragon to survive the conflict somewhat unscathed. Aemond and Vhagar persisted in wrecking devastation on foes and securing victory over everything. At the time of her passing, Vhagar was 118 years old.

WHY is VHAGAR important in HOTD World? 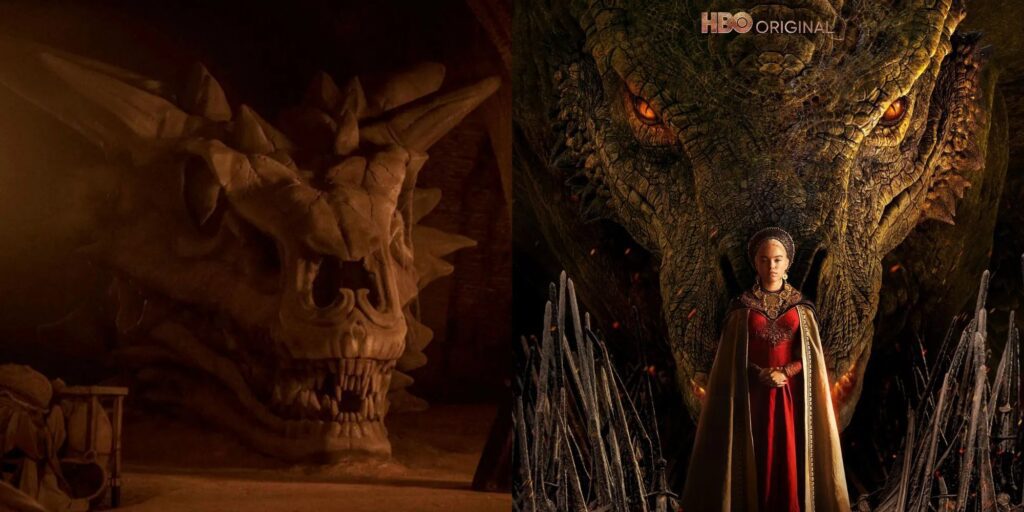 During the Targaryen civil war that House of the Dragon would depict, Vhagar lived from 52 BC to 130 AC (BC and AC, standing for Before Conquest and After Conquest, reference to the Targaryen conquest of Westeros). Vhagar is described as “golden with greenish blue accents and striking green eyes” in a Song of Ice and Fire calendar. Only Balerion rivaled Vhagar in size, according to Tyrion Lannister, who said Vhagar was one of the oldest and largest dragons in the books. She was also said to be able to cook a knight inside his armour and consume a horse whole. Viserys is understandably concerned about her disappearance.

Baelon Targaryen, the father of King Viserys, is one of the figures who has rode Vhagar. In Season 1 of House of the Dragon, Lady Laena Velaryon and Prince Aemond Targaryen—the second son of Viserys and Alicent—will be introduced as Vhagar’s final two known riders. Laena’s relationship with Vhagar is not entirely clear in the books, but we do know that she was about 12 years old when she formed her bond with the dragon. There may soon be news regarding Vhagar because, oddly enough, she is the same age now as she was in Episode 2.

DURING THE TARGARYEN CIVIL WAR, WHO RIDES VHAGAR?

After Laena tragically perished while giving birth in 120 AC, Prince Aemond, then 10 years old, claimed Vhagar as his own. Vhagar was the largest dragon of the time when the Dance of the Dragons began in 129 AC. She had grown to be almost as big as Balerion. Aemond kills Arrax, his nephew Lucerys’ dragon, early on in the civil war. The dragon Meleys and her dragon rider, Princess Rhaenys Targaryen, are then slain by Vhagar and Aemond with the assistance of King Aegon II Targaryen and his dragon, Sunfyre. Aegon II has scars from the battle between the three dragons, rendering him unsuitable to rule. The iron-fisted Prince Aemond is chosen to serve as regent, and he quickly determines Prince Daemon Targaryen is the primary threat to the throne (Matt Smith). To confront Daemon, Aemond travels to Harrenhal, the biggest castle in all of Westeros, but discovers that it is deserted. To ensure that King’s Landing was left without its king and dragons so that it could ultimately fall to Rhaenyra, Daemon has constructed a trap.

As a result of the throne’s loss, Aemond goes on the rampage throughout the Riverlands, which causes Daemon and his dragon, Caraxes, to go looking for Aemond and Vhagar. The spectacular struggle that follows ends with the deaths of Aemondm, his beloved, and the legendary 181-year-old Vhagar. All of this serves to inform us that Vhagar will likely appear on screen soon, and when she does, she and her rider will be in charge of some of the most thrilling combat in House of the Dragon. Vhagar’s whereabouts are unknown, but she and her riders will soon leave their mark on Westeros.