Where did The Umbrella Academy Season 3 take place? 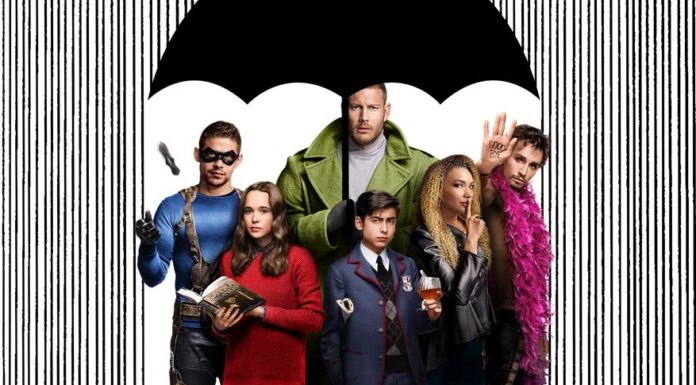 The Umbrella Academy is a fantasy action-adventure series conceived by Steve Blackman and developed by Jeremy Slater, based on the titular comic book by Gerard Way and Gabriel Bá. The Netflix series tells the story of a family of seven superheroes who are adopted by Sir Reginald Hargreeves. He founds The Umbrella Academy, where he trains his adoptive children to save the world. However, their relationship deteriorated during their adolescent years, and the family became alienated. After Hargreaves death, six members of the family reunite for the first time in years.

They decide to work together despite their differences in order to uncover the truth about their father’s death and avert the impending apocalypse. The suspense surrounding Hargreeves’ death, the coming apocalypse, the family’s superhuman abilities, and many other themes and concepts are featured in the superhero series. The third season, like the previous two, was set against some intriguing backdrops, leaving fans curious about the series’ filming locations. So, let us fill you in on the specifics!

The third season of ‘The Umbrella Academy’ was shot entirely in Ontario, specifically in Hamilton and Toronto. The third instalment of the series began filming began in early February 2021 and ended on August 28 of the same year. There were a lot of tight standards in place because the filming occurred during the COVID-19 pandemic.

As a result, there were fewer days on set and the total filming lasted significantly longer. Furthermore, according to accounts, the production was planned to start a little sooner than it did but was delayed owing to the epidemic. Let’s now follow the superheroes’ families and learn about the exact locales that feature in season 3!

‘The Umbrella Academy’ S03 was shot in Hamilton

I was at the Hargreeves House less than an hour ago, the stand from earlier today is gone. But I got some pics of the Hargreeves house, with all the Sparrows on the gate and windows. Hope this helps!@TOFilming_EM pic.twitter.com/al3riQOxDQ

The third season of ‘The Umbrella Academy’ was shot in Hamilton, Ontario, which is a harbour city. The production team used the same building as in prior seasons to film the outside shots of the Hargreeve’s residence. Hamilton’s address is 4 King Street East. The cast and crew were sighted filming several crucial parts in King George School on Gage Avenue in North Hamilton during the early phases of filming in February 2021.

Filming Update!#UmbrellaAcademy’s new location has been identified at Dundas and Ossington. ☂️🎥🎬

Furthermore, the Dundas and Ossington areas are two new locations in the fantasy series’ third instalment. Aside from that, for a few sequences, Ottawa Street North serves as Dallas, Texas in the 1960s. Many stores were built up to give a fitting backdrop for the era. Gage Park was even used for a number of significant moments in season 3 by the production team. It is located in downtown Hamilton at 1000 Main Street East.

The Umbrella Academy S3 was shot in Toronto

Additional scenes from season 3 of ‘The Umbrella Academy’ were shot in Toronto, Ontario’s capital city. The production staff was seen taping different crucial sequences at the Gardiner Museum in March 2021. The famed ceramics museum in Toronto is located at 111 Queens Park. Toronto is regarded as one of the world’s most diverse and cosmopolitan cities. Aside from that, the capital city is a major centre for theatre, music, filmmaking, and television production. Toronto has a long history of serving as a popular filming site for a variety of films.