Superman and Lois Season 2 Episode 14: Clark Kent is without his superhuman abilities 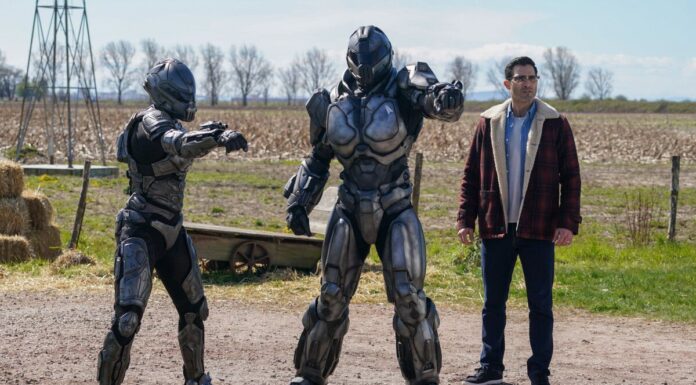 Superman and Lois season 2 episode 14 will release on June 21st on The CW.  In the penultimate episode, Clark Kent is without his superhuman abilities.

In, Superman & Lois Season 2 Episode 13, Ally and Lucy’s first encounter five years ago is shown in flashbacks. Smallville got a new hero, as the Man of Steel needed a helping hand. Ally shows up and starts draining Sam’s energy, forcing Lucy to summon Superman. When he arrives, Ally drains his energy as well. Because Superman has been weakened to the point that he can no longer defend himself, John informs Jordan, Jonathan, and Natalie that they must all step up. Natalie Irons received her own Steel outfit, Of course, John Henry had to be persuaded to allow his daughter to join the fight. (read the recap below) At www.tvacute.com, you’ve come to the perfect place.  We’ve compiled all of the officially revealed information regarding Superman and Lois Season 2 Episode 14 so far, including release dates, promo, and more.

Superman & Lois S02xE14 Synopsis: A weary Lois holds vigil at Superman’s bedside. Meanwhile, Jonathan and Jordan continue to worry about their father who seems more human now than ever. Lastly, John Henry and Natalie work together to figure out the best way to defend against Ally Allston’s powers. Emmanuelle Chriqui, Erik Valdez, Inde Navarrette, Sofia Hasmik, and Dylan Walsh also star. The episode was directed by Sheelin Choksey and written by Michael Narducci.

Where to Watch Superman and Lois Season 2 Episode 14

As Superman & Lois nears its Season 2 finale, Ally Allston initiates her plan to dominate two worlds after Superman destroys a mystical pendant uniting them. Lois Lane and her father Sam rescue Lucy from Ally’s cult, the Inverse Method. As the last battle lines are formed, a new hero joins the conflict while Superman suffers a universe-threatening defeat. Lois convinces Superman to stay in Smallville due to the inverted world’s peril and peculiar flow of time. John Henry Irons confronts his daughter Natalie about constructing her own Steel armor while conducting diagnostics on his suit. Meanwhile, in the inverted world, Ally tells her followers that she plans to integrate both realms to euphoric applause, while Lois hides and looks worried.

Lois and Sam drive to an Inverse Method facility on the outskirts of town to make one last appeal to Lucy, but her supporters are dedicated to Ally’s success. Jordan goes out to Lana Cushing so he can still visit Sarah after learning she’s cut relations with the Kent family. Lana forcefully rejects him. As Clark teaches his son to fly, Ally approaches her Inverse Way disciples in the Arrowverse, shocking Lois and Sam. Ally insists that Lois contact Superman so she may steal his powers, attacking Sam when she refuses. Lucy calls Superman to prevent Ally from hurting her father while Inverse Method followers flee. Ally damages Superman by sucking his life force, but John and Natalie use Natalie’s Steel armor to drive Ally away and restart Superman’s heart. Sam awakes with Lucy by his side at the military hospital, while Superman is in serious condition from Ally’s attack. Chrissy Beppo, who followed Sam and Lois to the Inverse Method meeting, deduces Clark’s secret. Superman is anticipated to survive his current meeting with Ally, but his body may have lost his superhuman skills from the power drain. Superman & Lois shows Lana clearly shocked by recent events; she consoles her family, particularly Kyle. In their universe, Lana reunites with Ally and plots to kill Superman. Ally wasn’t able to drain Superman’s powers and murder him, but she utilizes her newfound power to merge the two universes while he’s helpless.