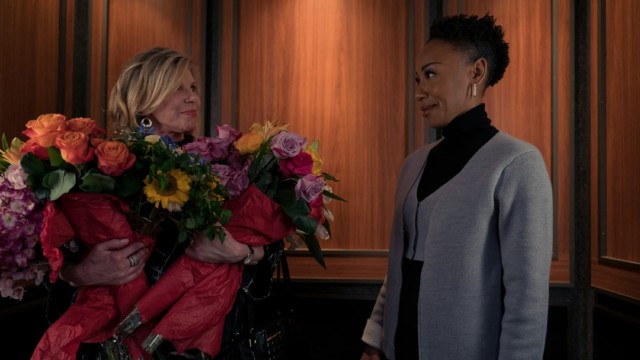 In The Good Fight Season, 6 Episode 3 is titled “The End of Football” When Liz (Audra McDonald) teams up with new partner Ri’chard (Andre Braugher) on a case tackling the Rooney Law, which requires teams to interview minority candidates for high ranking power positions including head coach, television’s most creative and enjoyable legal drama gets timely once more. They have evidence against a hypothetical Chicago team that has been suspected of skipping the workout, but there is a twist as always. When their teenage colleague Carmen’s mafia client (Ben Shenkman) relies on her to thwart punishment, Carmen (Charmaine Bingwa) finds herself in a pickle of her own. While rioting flares on the streets, Diane Lockhart (Christine Baranski) is merely trying to maintain her composure. www.tvacute.com  provides a comprehensive recap on this page..

Charles Lester and Carmen Moyo attend the crypto prom at Ben-Baruch. An undercover officer detains Charles at the prom and accuses him of killing Gal Avivi. Later, Carmen runs into Lester and offers him the names of several competent criminal defense attorneys who can assist him, but Charles preferred Carmen. Due to the fact that Charles and Ben-Baruch are co-conspirators and cannot be represented by Carmen at the same time. Later that evening, Ben-Baruch pays a visit to Moyo and asks her to speak on behalf of Charles. All she needs to do is deliberately lose the case. Moyo is confronted by Professor Callas, the instructor she had in Legal Procedure 101. He is the prosecutor in Charles’ case, and he possesses CCTV footage as a credible piece of evidence.

According to the given time stamp, the video depicts Charles leaving the crime scene immediately after the murder. Charles, on the other hand, said that he was out for a stroll by the lake at the time and that a lot of people might have seen him. He is confident that this is one of the uncommon circumstances in which he is truly innocent. In order to determine whether this CCTV footage has been subjected to a deep fake, Moyo contacts Jay. She thinks Ben-Baruch might be involved in this somehow. Diane learns about Moyo’s predicament and finally joins her in the investigation. Diane shows she is a valuable addition. Ben-Baruch, on the other hand, felt somewhat let down. Jay later provided evidence that the video was a sophisticated hoax. Oscar Rivi, another one of Moyo’s criminal clients, came to the court, despite the fact that Moyo knew Ben-Baruch would eventually come for her. Ben-Baruch was forewarned by Oscar Rivi before he could harm Moyo.

Charles thereby prevails in the matter, forcing Ben-Baruch to stand back. In the meantime, Darren Baptiste was the client of Liz and Ri’chard in a racial discrimination complaint. Mr. Camden rejected Darren in favor of a white candidate to be the coach of the Chicago Crows. Liz and Ri’Chard decided to pursue a class action lawsuit after carefully reviewing the evidence, but Mr. Goate, who hired them to defend Darren, wasn’t interested in it. Jay discovered via his research that Mr. Goate desires to purchase the Crowes. The team owners have already been introduced to by Mr. Goate, who is leveraging the case to reduce the asking price. Both parties came to a resolution in the case. Darren will attempt to work with the Crowes as a coach after Mr. Goate purchases them. Diane kept up with her PT-108 therapy throughout this. The following stage of the same involves going 72 hours without using a computer, phone, or news source. Marissa assisted her in doing it. During Dr. Bettencourt’s conversation with Diane, a bomb from the street protests nearly exploded in his office, bringing the episode to an end.