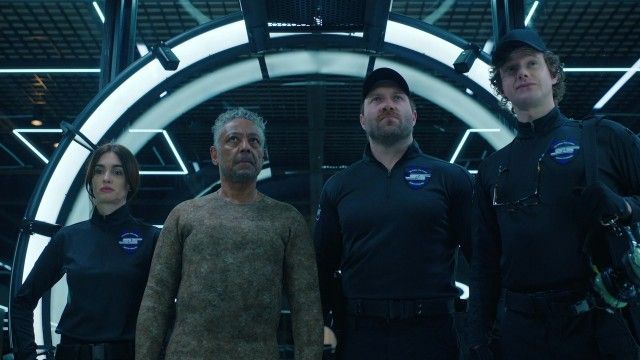 Kaleidoscope, a brand-new crime drama on Netflix, has generated a lot of buzzes, in large part because of its innovative concept. You may watch each episode of the season in any sequence, and they all work together to tell a single, cohesive tale. Giancarlo Esposito, Paz Vega, Rufus Sewell, Jai Courtney, and other actors can be seen in the series, which follows a group of expert burglars as they try to open an apparently impenetrable vault. We followed the squad for six months following the heist in “Pink” and learned all that happened then. Moving on to “White,” the major theft, (tvacute.com) Here, we are now learning all that transpired.

The heist’s day has arrived. A montage of the crew preparing for the major confrontation is shown. This series has consistently had excellent music. We can also make out the FBI watching from a distance. As a hurricane is about to reach the city, the weather is obviously terrible.  The crew cautiously makes its way inside each level of the facility, signalling the start of the theft. It’s very amazing to watch how everything that has been building up to this—if you’ve been paying attention—has come together, including how the plants that were sent were used as a key component of their passage through a different level of security. The level of information used by the writers in this series is extraordinary. The pieces start to come together exactly as they should in order to open the safe. But as the temperature rises, anything could be set off, so Ava needs to act to blow something up and lower the temperature.

They begin moving once they are inside. To let Roger know everything is okay, Hannah phones him. His son calls for him even though he is aware that the temperature sensor went off. The bonds are in Stan and Bob’s possession when they successfully open the safe. Leo tells Stan, “It’s all there, move on to the next,” which makes me doubt him because I know they aren’t all within. Were they switched, but did he have a plan with Hannah? Ava is seen texting the FBI at the 59th floor while also sending the bonds up. When the FBI arrives, Nazan smashes a window to enter the building. Leo informs Bob of their presence and advises him to ignore them and continue. But since it was a fake gunshot, it appears that she led them in a different way. Nazan breaks into the walls after hearing something in the walls but being unsure of what it is. When they discover the bogus feeds, they cut all the cords, causing the camera feeds to resume their original state. Roger is regrettably talking to his kid when all of this is happening. He is hugging his son when he notices that they are being robbed on the surveillance monitors and runs to the building.

Roger has informed Leo via a message from Hannah, but Leo informs the workers that there is one more load. It’s really the only thing that irritated me so much throughout the entire presentation since the music is so distracting that you could hardly understand what Leo was saying. Judy says “package ready,” and RJ can be heard saying “check,” but Hannah fetches the packages, not RJ, as we can see. Then, with a bang, the dynamite explodes as Hannah and her buddy unpack all the bonds into boxes and arrange them so that one is on top and the others are beneath it in the form of paper. What dramatic twists we witness in “Red” are fully developed in this episode. Finally, Bob walks away as Leo stays behind to take one final shot at the vault. Sadly, their approach backfires because it triggers a mechanism Bob was aware of. He then appears upstairs and tells Judy that it is time for them to leave. She initially baulks, but eventually follows him. He knocks RJ to the ground and orders Judy to get in the truck as we watch them smash the door. RJ stands up and shoots Bob, but Judy shoots and kills him as RJ stands up and raises the gun to Bob’s head. Leo and Ava remain downstairs while they send Stan upstairs.

Stan sees Judy and Bob together as he ascends the stairs, and as Bob begins to shoot at Stan, Stan flees. Stan is being challenged to a duel by Bob who is standing in the centre of the road. Judy, however, strikes him from behind, chokes him out, and it appears as though he has died. When Ava finally makes it upstairs and notices that there is blood all over, she makes a snap decision to go and gets in the truck. Nazan stops her in her tracks and tells her that she would send her companion back before she can leave, but she continues driving away after telling her that she has already left. Ava gets shot by Nazan with a gun, but she manages to escape the scene. After she passes Bob, who is lying in the middle of the road and appears to be dead, Bob rises up and inserts a pen into his throat to open up his windpipe.

Leo is tackled to the ground in the office by Roger’s right-hand man. Hannah uses the fire extinguisher to put him out before he has a chance to shoot him. Hannah then explains how she altered the plan and removed all of the bonds. She negotiated a covert agreement with the bonds of the citizens under which they would submit an insurance claim and then depart. She then asks, “Show me where you are brave,” to end the sentence. You are crying; not me. What an awful scene. Nothing compares to pairing the two standout actors from this series, Tati Gabriel and Giancarlo Esposito, and producing next-level performance. I am astounded. In order to get him arrested, Leo plants the evidence that the FBI discovered at the end of “Red” as the episode comes to a close.