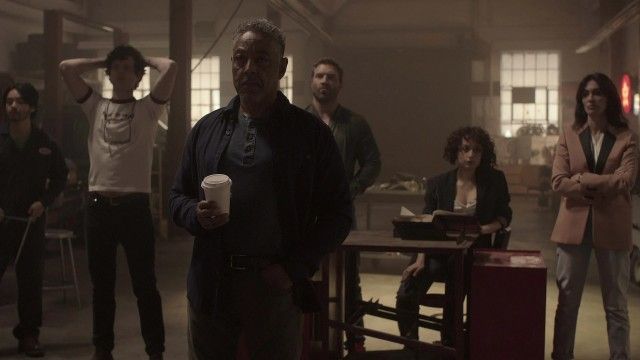 The episode “Yellow” of Kaleidoscope is jam-packed with exciting moments and provides a sneak peek at what’s to come in the series. It never ceases to amaze me that while I’m watching this series, other people will have a completely different experience and will watch the episodes in a different order. If Netflix users are willing to participate in this process, the notion has the potential to be quite successful. (tvacute.com) Here is all you need to know about the conclusion of the Kaleidoscope Episode 1 Recap, in case you missed any of the exciting moments.

According to the information presented on the title screen, it is now six weeks before the heist. Leo says that you need a crew you can trust and that lone wolves do not succeed. Scenes depict Laura and Kate, two strangers who appear to run into each other. They fall in love right away. It has come to light that Laura, whose real name is Hannah, has bugged Kate by providing her with a device that contains a covert camera in order to monitor her activities. Kate is employed as a banker in the city of New York. In the following scenario, Laura is seen entering a vault and then exiting the building while carrying two briefcases. Stefan, the bank CEO, receives the briefcases from Hannah; Roger informs the chairman that it was simple to compromise security. The bank is upsold a new vault.

At the store where Stan works, Leo had his first encounter with him. They joke around and embrace one another. Leo is informed by Stan that “he is retired” due to taking care of his loved ones. Stan’s eyes light up as Leo informs him the next scheme will cost “seven billion dollars.” They have to pull off a heist on a subterranean vault. Roger Salas, who assured the bank and their three primary shareholders that their new vault will be “vault-proof,” is their target, according to Leo. Leo is encouraged to smile by Stan’s belief that they need someone from the inside because he has things under control. Judy is interviewing witnesses at the police station in the interim to aid in the capture of the culprit. The suspects respond with “I’m a fuc*i*g stupid,” thanks to her. Judy is, it turns out, aiding Bob’s release from prison. Police trick her, and Bob gets off with no fine.

Judy then encounters Stan in the bar. Stan gushes about how gorgeous she is. They appear to be connected now, and there is remorse between them. Stan should have stayed in New York, says Bob, who comes over and gloats in front of him. Stan switches the subject and informs Judy that Leo, a male, wants to visit him. Leo talks about the robbery while placing everyone’s burger orders. Judy appears to be on his side. Ava then approaches Leo and offers to assist him. Leo questions whether she can keep up, but she assures him that it’s a bucket list, will cost a billion bucks, and that she owes him. RJ is a man Leo and Ava meet because they need a reliable driver for the heist. To pay for it all they require for the robbery, the heist crew has to raise $350,000. Bob advises using Diamond Way. Although this shopping boulevard brings in billions each year, it is heavily guarded.

As soon as possible, the heist squad starts to gas Diamond Way. They don their gas masks, hunt down security agents in plain clothes, and steal jewellery and other pricey stuff. Bob becomes preoccupied with a particular piece of jewellery and stays too long. After being shot, his crew is forced to retaliate. Despite the setback, the robbery crew manages to succeed. As Bob will be breaking the vault, the heist crew begins working to repair his terrible injuries. In the meantime, Roger is looking for the organization’s mole because one of their vault devices was hacked. One of Roger’s workers who he thinks hacked their system is fired. Roger then speaks with Hannah. Despite the fact that she is expecting, he gives her the position of Senior Vice President. He cautions her not to let her family’s influence cloud her judgement. Hannah is the mole, as it turns out. She runs into Leo and tells him that the theft has a lot of risks, including the demise of her career. Leo gives her a reassuring hug before telling her that the heist will proceed.