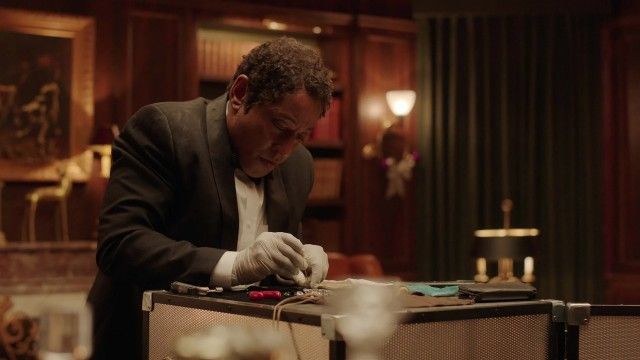 Netflix‘s Kaleidoscope is a brand-new crime/heist story that spans 24 years and follows the audience from start to finish. Giancarlo Esposito‘s master burglar Leo Pap and Rufus Sewell’s head of a security company guarding a cutting-edge bank vault in Manhattan are at odds. Like in Die Hard, one of Kaleidoscope’s inspirations, Leo employs at least five thieves, each with a specialization, to steal $7 billion in unsecured bearer bonds. Every “Kaleidoscope” episode takes place at a certain point in the robbery, whether that is during the theft, just before it, or after it. The best episodes to start with if you want to comprehend the driving forces behind the heist before it happens are “Violet,” which is set 24 years before the robbery, and “Green,” which is set seven years before the heist. The reasons for Leo Pap, the primary character and the final heist’s mastermind, were established in both episodes. In episode 3, Leo, a decent family man, makes several attempts in the past to escape his criminal past. But if you have an enticing profession or a spouse who is convincing, it will be difficult to break previous behaviors.  (tvacute.com) Here continue reading to learn everything you need to know about why Leo Pap committed the actual heist.

The title card appears, and it states that it has been 24 years since the heist took place. Leo is the narrator, and he is discussing his decisions about his wife and children. He wants to stop, but he is unsure whether or not he can. Then, when Leo pulls off his own theft, we witness Roger having a business conversation with a man in a bar where they can also see several women. At this point, we learn that Roger and Leo once shared a workplace, which, if you were paying attention, we were aware of but unsure of. Roger remarked that he wouldn’t have been able to get Leo out of the safe, which made Leo understand how close he was to maybe dying or not being able to escape. As a result, when Leo gets home to offer his wife a bracelet, he sees his daughter Hannah and takes her out to breakfast.

It’s at this point when the backstory of Hannah and Leo’s little game, in which they observe a family and analyse its narrative, is revealed. A sweet little game, it is. Roger phones him at breakfast and informs him that they have a job in Vegas. Ava (played by Paz Vega) mentions that they have a big job ahead of them when he tries to fence the jewellery he just acquired for her a short while afterwards. Then, when Leo returns home to talk to his wife about stopping, she raises the crucial query of whether he can stop. Roger then arrives for dinner with his date. Naturally, Leo suggests that Roger give up, but he responds by slowing down. Leo finally tells Roger that he is finished with him, but Roger doesn’t take it well.

Leo runs a car dealership now that he is free, but business isn’t doing so well financially. Hannah and his wife depart, and Roger appears to speak with him. And let me take a time to remark about this loud, obtrusive score that is irritating. They are speaking, but you can hardly hear them over the music. It annoys me because it’s a recurring theme in the show. Roger informs Leo that he owes more than $200,000 and needs assistance to escape his predicament.  When Leo enters the club to see his wife, the receptionist causes him a little difficulty. He hears Hannah yelling though, which sparks a heated argument between Leo and Leo’s wife’s boss. Leo finds himself back with Roger to discuss the next job when she is dismissed. Lilly stops Leo in his tracks before he can tell her they got the job and didn’t worry about anything as he heads to the office to inform her about it.

While Lily was at home, her former manager called and told her that she needed to report to work immediately. Naturally, they are in need of the funds, so she travels to the location where Leo would attempt to commit a robbery. We watch Lily arrive just as the first diamonds are being swapped out so that she can find out what it is that is expected of her. However, the task is taking longer than expected, and Roger is powerless to stop them. As a result, Leo is forced to hide, and although the security guard finds Leo, Roger is there to rescue the day. But, as Leo is exiting the building, he discovers that Lily’s car is still parked there. He immediately dashes back as to rescue her. Sadly, we witness her being consumed by the flames, and he is unable to save her. However, he looks up to Roger, who is in a position to save her, but Roger walks away. Finally, we have an explanation for why the stakes in this robbery are so high: Roger fled the scene instead of helping Leo save his wife. Leo, who is at the hospital, notices the police approach and gives Hannah a brief speech that convinces Hannah to introduce her to Ava and accompany her, never looking back. What a scene, what a story.