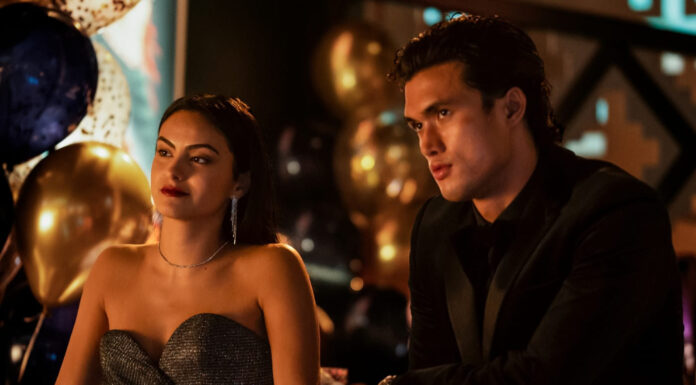 Riverdale was spooky in episode 97 episode! This chapter was the most atmospheric horror in the five-episode event series. The Town of Rivervale is attempting to return to normal following Archie’s “generous” sacrifice. When the ghost La Llorona arrives in town and begins frightening youngsters, the gang tries to devise a strategy to stop her. One of the residents, in particular, makes the ultimate sacrifice. Meanwhile, an old story may jeopardize Jughead and Tabitha’s romance. To know more see the recap for episode 2 below. The anticipation of what will happen next has piqued the interest of spectators.  At www.tvacute.com, you’ve come to the perfect place.  We’ve compiled all of the officially revealed information regarding Riverdale Season 6 Episode 3  so far, including release dates, promo, sneak peek, and more.

‘Mr. Cypher,’ the third episode,(Rivervale Part 2) will investigate the appearance in Rivervale of a mystery guy who appears to be the devil himself. Jug, in particular, will fall prey to the man’s trap and agree to his requirements. Kevin’s relationship with Fangs may be revisited. Meanwhile, Veronica will likely use Reggie’s accusation of the devil to boost her casino business and corrupt crucial people. In her casino operations, she’ll revive her friendship with Nick St. Clair. Betty will also meet the Trash Bag Killer (TBK), who has a new look and new motives.

Riverdale Season 6 Episode 3 will release on Tuesday, November 30 at 9/8c on The CW. ( on CW50). The show will continue to air once a week, but at a different night and time, just after The Flash. Riverdale Season 6 could go on for a little more, Seasons 4 and 5 both had 19 episodes.  you can watch Riverdale Chapter 98 on Streaming Services Such as YouTube TV, DirecTV, and Fubo TV. Riverdale Season 5 can also buy and rent on iTunes and Prime Video by even purchasing a single episode or the entire season.

In a voiceover, Jughead discusses the Ghoulies and how one of the Serpent’s princesses fell in love with one. Toni accidently killed Danny (Darla’s son) when he walked in front of her during the conflict between the Ghoulies and Serpents. Toni is in therapy three months later, telling her therapist that she did not intend to kill. She was unable to muster the courage to apologise to Darla Dickerson. Reggie’s father is in the hospital, and Veronica and Reggie discuss it. Reggie buys a car that looks like the one he had in high school. He buys it for twice the price of the book. He cleans up the automobile, but a vision of him driving with a mysterious woman appears in his mind. Jughead irritates Tabitha by failing to hang the artwork in the flat. They uncover a secret compartment as she knocks through the wall and feels a breeze. There are scotch bottles and tiny boats strewn over the room. Sweetwater River is where La Llorona’s spirit arises. Someone is attempting to drown Juniper, Dagwood informs Cheryl.

Cheryl saves Juniper from being drowned by La Llorona just in time. Betty is debating whether to name her child Archie or Polly. Cheryl wishes for the twins to remain with Alice until the spirit is extinguished. Tabitha learns from the realtor that Jughead was aware of the previous tenants in their apartment. In a murder-suicide, Sam and Diane died. Reggie is caught in a lie by Veronica, who tells her the truth about him fixing his new car. Sam was an obsessed painter, Jughead explains Tabitha, and Diane killed him with a hammer before dying herself. Tabitha is enraged that Jughead concealed a secret from her and that he had time to create a doorframe because of it. Lucinda (a Serpent) drowned her daughter Sandra in a bathtub, according to Betty. Lucinda is being investigated by the FBI. Toni is informed by Lucinda that La Llorona drowned her daughter. In front of Pop’s, Reggie and Veronica are making out in their car. When a couple of Rivervale High jocks cheer them on, Veronica cuts it short. Tabitha has a nightmare about hammering Jughead to death. In the relationships of Veronica/Reggie and Jughead/Tabitha, tensions rise. Tabitha is told by Pop Tate about a waitress who died in a deep fryer accident in the diner. He claims that a disturbance in the 1980s, during which all of the windows were shattered, drove the hauntings away. Veronica discusses her problems with Reggie with Hermosa. She doesn’t think she’s envious of Reggie’s automobile, “Bella.” Toni conducts research on La Llororona and concludes that the legend may be accurate. Betty is warned that the ghost may come after unborn children.

Tabitha is concerned that Jughead has resumed his drinking. Jughead didn’t write for another day. Betty gets visited by La Llorona while she is sleeping. A wet handprint is left on her dress by the spirit. Tabitha discovers a hammer in the refrigerator. Jughead informs her that he is nearly finished with his novella. Reggie’s car contains a photo with a love message on the reverse, which Veronica discovers. After running into Principal Weatherbee, she discovers that the photo is of Miss Isabella Soprano, a former driver’s education teacher who mysteriously disappeared. After spotting La Llorona enter the school, Toni activates the fire alarm. Betty goes to see Dr. Curdle Jr only to find out she’s never been pregnant; she now believes the spirit is in town and has kidnapped her child. Betty informs Tabitha that she used to read Jughead’s first draughts all the time. Toni is visited by Gina, a social worker, for a wellness check on infant Anthony. La Llorona sneaks into Anthony’s apartment to kidnap him, but the infant survives as the adults rush in. Reggie’s automobile is destroyed, and Veronica confronts him about Miss Soprano. Reggie admits that he never had an affair with his instructor; she was only the person who informed him of his father’s violence. Reggie’s father passed away lately in the hospital. Toni and Betty create a plot to bring La Llorona out; they will need Cheryl’s assistance to stop her. At the Whyte Wyrm, Baby Anthony will be safe. Reggie confirms that his and Veronica’s relationship is fine. As an apologetic gift, Veronica gets him a new automobile. To summon La Llorona, Cheryl, Toni, Betty, and Nana Blossom perform a seance.

Nana Blossom is taken over by a spirit who explains her background and answers their questions. Martha Mare is La Llorona, a Rivervale nurse who was drowned by the locals. Darla Dickerson summoned La Llorona to town, Nana Blossom says. Tabitha snuck into Jughead’s office to read his novel; she is inebriated and enraged by what he wrote. Tabitha starts destroying his bottled ships and his typewriter. She sees Diane’s reflection in the mirror before attacking him. She comes to a halt and declares her love for Jughead. Jughead declares that she adores her back. Tabitha and Jughead’s apartment is empty of ghosts. Darla confronts Betty and Toni in the cemetery. Darla claims that the demon will not be defeated until Anthony is dead and in the demon’s arms. They learn that La Llorona overcame the Serpents and delivered the infant to Sweetwater River. Jughead and Tabitha are unsure if their feud will be resolved at this time. In his car, Reggie gets a vision of Miss Soprano. Toni offers La Llorona to take her place in order for Anthony to be saved. Toni believes she should be held accountable for Danny Dickerson’s death. Toni is condemned to be the new La Llorona, according to the spirit.