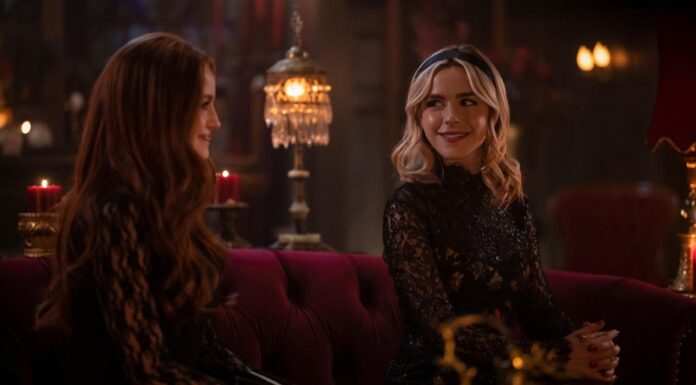 On Riverdale Season 6 Episode 3, the devil arrived in town with a plethora of tempting temptations. There’s a lot of confusion, a lot of dodgy dealings, and a lot of promises of enormous success. When the horrible agreements were dangled in front of them, no one said no. Rivervale’s five-part event’s third segment embraced its devilishly delightful dark side! To know more see the recap for episode 4 below. The anticipation of what will happen next has piqued the interest of spectators.  At www.tvacute.com, you’ve come to the perfect place.  We’ve compiled all of the officially revealed information regarding Riverdale Season 6 Episode 4  so far, including release dates, promo, sneak peek, and more.

The five-part Riverdale season 6 episode “Rivervale” explores a supernatural and horror alternate reality. Betty (Lili Reinhart) and Archie (KJ Apa) were assumed dead after being blown up by Hiram (Mark Consuelos). Tonight’s episode will feature a long-awaited crossover with Kiernan Shipka reprising her role as Sabrina Spellman from Chilling Adventures of Sabrina. After years of anticipation, the crossover was finally confirmed early this year. This is also Sabrina’s first addition since her Netflix series ended late last year. The photographs hint at the crossover as well as the time-hopping events of the episode, which will chronicle the Blossom women’s hardships and tribulations throughout centuries.

A new collection of photographs for “Chapter Ninety-Nine: The Witching Hour(s)” has been released by The CW. Images reveal Kiernan Shipka as Sabrina Spellman in a Riverdale/Chilling Adventures of Sabrina crossover episode. Both Cheryl (Madelaine Petsch) and Sabrina are depicted in a covenstead-like room with crimson candles. Shipka also wears the same black headband as her titular character. See images below:

Riverdale Season 6 Episode 4 will release on Tuesday, December 7 at 9/8c on The CW. ( on CW50). The show will continue to air once a week, but at a different night and time, just after The Flash. Riverdale Season 6 could go on for a little more, Seasons 4 and 5 both had 19 episodes.  you can watch Riverdale Chapter 99 on Streaming Services Such as YouTube TV, DirecTV, and Fubo TV. Riverdale Season 5 can also buy and rent on iTunes and Prime Video by even purchasing a single episode or the entire season.

Jughead tells a storey about the devil coming to a tiny town to collect lost souls. He claims that the devil can wear any disguise, and his storey is linked to Rivervale. Pop Tate allows a man to eat without having to pay. Pop notices a man outside the diner, but his face is obscured by a demonic face. Pop had a heart attack and passes out. Reggie and Veronica declare their love for one another. In bed, they kiss. Glenn informs Betty that The Trash Bag Killer has been apprehended by the FBI. TBK will only communicate with Betty, therefore Glenn needs Betty’s help to get a confession from him. On the news, Alice learns that a new casino (Babylonium) is about to open in town. Veronica tries to assuage Alice’s fears by assuring her that the casino will be managed legally. Reggie, on the other hand, is informing his staff that the casino is being run illegally in order to defraud clients. Alice is invited to the soft opening by Veronica. “Mr. Lou Cypher” pays Tabitha a visit at the hospital, intending to steal Pop’s soul.

Mr. Cypher discloses that Pop’s father sold his soul to make the diner a success, but Pop swapped his soul for his father’s in exchange for a deal. Tabitha is offered a deal by Mr. Cypher: give up the diner and Pop’s soul will be redeemed. He gives Tabitha some time to consider the deal. Tabitha informs Jughead of the agreement. Alice visits the casino’s soft opening. She’s on the lookout for any wrongdoings. Kevin should be on Broadway, according to Mr. Cypher. He claims that he could assist Kevin in achieving popularity and becoming a celebrity. After the show, he wants to speak with Kevin. At the casino, Kevin performs a show. Kevin signs the deal with Mr. Cypher without reading it after a smell of success and a conversation with his “manager.” Mr. Cypher crosses Kevin’s name off his list, which also includes Betty, Reggie, Tabitha, and Jughead. Mr. Cypher has won his last 20 hands, according to a manager. Veronica attempts to close the table, but Mr. Cypher assures her that he will be paid by Saturday. He’ll make a claim on a soul. Mr. Cypher is Lucifer, Veronica deduces (aka. the Devil). Mr. Cypher is the devil, according to Reggie. Reggie seeks Veronica for help in stopping the deal in which he sold his soul to get the club to open. Betty conducts an interview with The Trash Bag Killer; she is aware that he is the perpetrator of all of his atrocities, but she has a serious question for him. According to TBK, there is total evil and that a portion of Betty is pure evil. Betty takes a shower to freshen up. Betty learns from Glenn that TBK was never apprehended by the FBI or found in Rivervale. Tabitha wants to close the diner, but Pop insists that it is the town’s safe haven and heart. He implores her to keep the diner. Mr. Cypher is called by Veronica with a counter-offer to trade another soul.

Mr. Cypher meets with Jughead for an interview, but he refuses to surrender his soul. Mr. Cypher offers Jughead a deal: either he gets the interview and publishes it, or he gets the interview but never gets to write again. His creative juices will keep flowing. After their interview, Mr. Cypher agrees to let Jughead make his decision. Veronica has set her sights on Nick St. Clair in order to trade the soul for Reggie’s life. Jughead opts for option #1, which is to publish the interview with the devil and gain all of the fame. Unfortunately, he won’t be able to write again after that. Nick is shown to be a married senator. Veronica dupes Nick into admitting he’s never paid taxes and arranges for cover-ups of harassment, affairs, and hit-and-runs. She persuades Nick to make a bargain with the devil, which Mr. Cypher accepts and takes Nick’s soul. Reggie has been saved, according to Mr. Cypher. The devil, on the other hand, intends to take Veronica’s soul. The interview is published by Jughead. Betty’s conversation with The Trash Bag Killer continues. TBK spiritually communicates through Hal Cooper to speak with Betty, revealing that he is the devil and knows about hell. Mr. Cypher’s agreement was slid into Veronica’s stack of business paperwork, Reggie reveals. He persuaded her to sign away her soul in secret. She dismisses him from the workplace. Mr. Cypher makes Veronica an offer: Veronica will live if she can persuade Alice to sign away her soul. Mr. Cypher will claim her soul if she fails. Jughead’s account about the devil is picked up by the Associated Press. Jughead receives calls from major publications and agencies seeking support for his next essay, but he is unable to write. A diner patron thanks Tabitha on her kindness to the locals. Raphael bestows a gift on Tabitha in order to aid her in the future battle. Veronica uses a charitable donation to try to persuade Alice to sign the contract. She backs out, though, in order to save Alice’s life.

Veronica’s terrible behaviour has enraged Alice. Jughead has lost his ability to write. Betty accepts the Trash Bag Killer’s promise to go to hell in exchange for rescuing her father’s soul. Betty, according to TBK, is “The Whore of Babylon” from the Bible. Betty rejects the devil’s first offer, but he torments her by reminding her that Polly is in hell. The Trash Bag Killer is assassinated by Betty. Betty takes off the disguise, revealing Glenn. Mr. Cypher confesses that he duped Glenn into visiting Rivervale in order to safeguard Betty. Before midnight, Veronica tells Reggie that she’ll play the night’s final song. Mr. Cypher is begged by Jughead to restore his writing talent. Mr. Cypher agrees to take Jughead’s soul, and Jughead signs the contract. On stage, Veronica performs “Marry The Night.” In exchange for the restaurant, Tabitha and Pop make a pact to save Pop’s soul. Before the diner shuts, Tabitha wants one last milkshake. She makes a milkshake for her, Mr. Cypher, and Pop. Tabitha added tears from the Virgin Mary’s crucifixion to the milkshakes. She reveals that the tears and her guardian angel have now protected her and Pop. Pop’s was consecrated as a result of the tears, and the location is now free of the devil’s influence. Jughead has regained his ability to write. Betty tells the FBI she has no idea where Glenn is and that she buried his body under her house. Veronica says that she made a bargain with Mr. Cypher to provide him with a new lost soul every week in exchange for his protection. Reggie was duped into signing a booze delivery receipt with Mr. Cypher’s pen, according to Veronica. Reggie’s soul is claimed by Mr. Cypher.