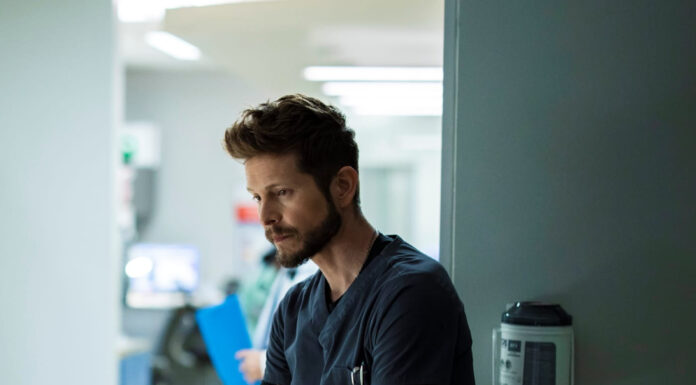 So often, the attention is on the person who needs help, but as we saw with George and Celeste on The Resident Season 5 Episode 8, taking care of others has its own costs and can harm one’s health. Conrad learns that she suffers from stress-related cardiomyopathy as a result of caring for her husband. Caretaker burnout is real, and it’s admirable that the show spent an hour emphasizing that point. We also met Sofia Desoto for the first time, and CoNic fans, be ready because Conrad is definitely dipping his toe back into the dating zone. Continue reading about the episode 8 recap by scrolling down the page. What will happen next?  www.tvacute.com has a promo and exclusive photos for The Resident Season 5 Episode 9 titled “He’d Really Like to Put in a Central Line” below. As a result, you’ll be able to mentally prepare yourself for the next episode. Before we get into The Resident season 5 episode 9, there are a few things to keep in mind. First and foremost, the autumn finale is approaching! The events of episode 9 next week will play a huge role in setting the stage for that episode, which will air in early December.

Now, all we have to do is prepare for some of the most challenging patients yet. . A patient who appears to have completely run out of good fortune will be profiled. Conrad will eventually demonstrate to Trevor how to properly care for this really unlucky patient. Leela will be dealing with an indecisive patient in this episode. If that wasn’t enough, she’ll be given the option of taking complete responsibility for this patient’s life. She will undoubtedly struggle with this critical decision. Raptor will spend the majority of his time trying to figure out how to care for his mother in this episode. Devon and Kit will be extremely busy as they try to take care of everything, for this new episode 9, and they will be completely overworked.

The Resident Episode 509 Synopsis: Conrad takes Trevor under his wing to care for a patient whose good luck seems to have run out. Leela struggles when given the decision to take full responsibility of her indecisive patient’s life and The Raptor continues to try to figure out a care plan for his mother. Meanwhile, both Devon and Kit are stretched far too thin trying to balance everything on their plates.

The Resident Season 5 Episode 9 will release on November 30, 2021, at 8 p.m. ET on Fox. The fifth season has 23 episodes, each lasting 43–45 minutes. The episodes will also be released weekly, on Tuesdays.   Online Streaming Options; If you prefer online streaming, the episode will be accessible on Fox’s official website and the Fox Now app. Season 5 Episode 9 of ‘The Resident’ will air on FuboTV, Sling TV, and DirecTV. After their release, new episodes can be rented or purchased on Vudu, Amazon Prime Video, Google Play, and iTunes. Also, the first four seasons are available on Hulu.

AJ and Bell are in surgery, discussing how either of them could be Chief of Surgery. When their patient starts bleeding, they stop it swiftly. Kit, on the other hand, notices this. In the emergency room, Devon encounters an older couple. The man has collapsed once more at home. Devon notices his wife Celeste, who appears distressed and exhausted. Meanwhile, at work, Conrad meets a nurse who is highly interested in him and invites GiGi to the nurse’s station. A surgical coach is introduced to AJ and Bell by Kit. They’ve been slandered. Kit is unconcerned. Devon has another meeting with the older couple. George is hungry, and his wife is exhausted. Devon believes they require the services of a social worker.

As Conrad takes her along while he heals patients, more nurses are exploiting Gigi to flirt with him. Devon is asked by Winston, the social worker, to come up with a justification to admit George. Devon and Conrad, determine he requires a CT scan of his skull. Bell and AJ chuckle as they watch surgical footage. Their coach expects them to take things more seriously. She notices far more issues than they do. She also discusses their egos. AJ is all set to depart. Devon realizes that George is suffering from a brain bleed. It’s a little area, and surgery would be too dangerous. Later, he puts some of her techniques to the test.

Conrad later encounters GiGi and Marion in the daycare. Conrad is treated normally by her, and GiGi adores her. AJ is pitted against his surgical coach. Devon knows George suffers from Parkinson’s disease. Winston walks over to Celeste to speak with her. She isn’t responding to my messages. A college student is taken to the emergency room with a huge piece of glass embedded in his body. He stops reacting, and it is immediately taken to the OR. Celeste and Conrad have a meeting. Conrad learns that she suffers from stress-related cardiomyopathy as a result of caring for her husband. They recommended that George be admitted to a facility while Celeste recovers on her own. She informs him that she requires it and speaks up for herself in front of her spouse..

AJ and Bell enter the operating room. Bell begins to employ some of the coach’s suggestions, and AJ follows suit. Their coach was completely correct. They express their gratitude to their coach after that. She assures them she’s finished, but AJ insists on more. She chuckles. Devon discusses performing clinical studies with Kit. She’s looking for a proposal. GiGi is picked up by Billie from daycare. Conrad appears to pique her attention. He inquires as to her feelings about him hanging around with Marion. Billie encourages him to take the risk. She stands there, forlorn, as he walks away to visit Marion.