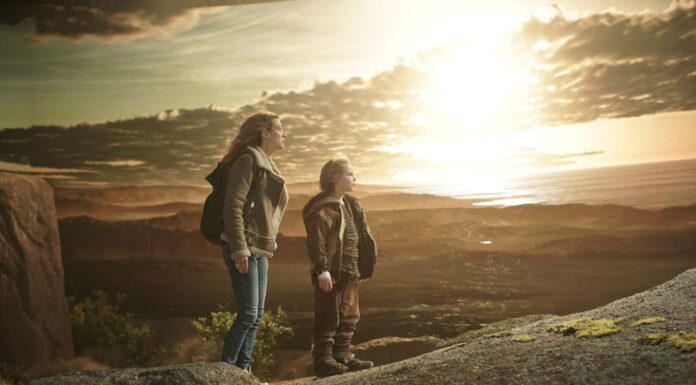 The desperate mission for survival continued on La Brea Season 1 Episode 9, with a new face stepping up to stir some trouble. Meanwhile, Eve realized how critical it was to get Isiah through the 1988 portal before the clock ran out. Ella’s identity was exposed. Gavin learned he was from 10,000 BC, and the two storylines were intertwined. Lilly sought to persuade Veronica to improve so that people would see her in a new light. To know more see the recap for episode 8 below. The anticipation of what will happen next has piqued the interest of spectators. You may get a synopsis, and promo for La Brea episode 10 titled  “Topanga” at www.tvacute.com, which will help you understand the show better.

let’s start from the beginning, La Brea is centered on a mother (Zea) and son (Jack Martin) separated from father and daughter after a massive sinkhole mysteriously opens up in Los Angeles. With thrilling twists and emotional interactions, La Brea continues to deliver. Some of the mysteries surrounding the world will begin to be revealed in the finale episode.

La Brea Episode 1.10 Synopsis: When a stunning revelation puts Josh and Izzy’s lives on the line, Eve and the other survivors desperately search for the young boy who holds the key to saving them; Gavin and Izzy must rely on a stranger if there is any hope to reunite their family.

Will there be a Season 2 of La Brea?

The network showed from the beginning that they were devoted to making this series a success, and they were mostly successful. In terms of ratings, this has been one of the more successful new programs this year, and it’s done well enough that the network has already ordered a second season. and as a result, they have more stories to tell.

Seda teases what viewers may expect from his character Dr. Sam Velez and Sam’s daughter Riley (Veronica St. Clair) ahead of the show’s Season 1 finale.  “Everyone is deciding whether they want to depart or stay,” he explained. “For whatever reason, I believe Sam and Riley are still holding out hope that they’ll be reunited with their families. I believe they will come to a sound choice as a group.”

“Without actually giving away what occurs, this is a story about a family attempting to reconnect—emotionally and physically,” Appelbaum said of the conclusion. In the finale, they’re on that route, but it won’t be easy.”

He went on to say, “They’re going to be segregated in new and intriguing ways.” “As Season 2 progresses, we’ll be putting characters in new realms.” At the conclusion of the finale, there will be a slew of unexpected twists and turns that will put our protagonists in a variety of situations. But we’ll keep a lot of what we saw in Season 1 as well. Characters will still be trying to figure out how to survive down [there] in the clearing. However, one of the show’s goals for future seasons is to broaden the scope of what it can be.”

What is the total number of episodes of ‘La Brea’?

One family, in particular, is caught in the middle of two worlds. While trying to sort through their perplexing circumstances, the mother and son strive to find their way back to the father and daughter. La Brea debuted on Sept. 28, 2021, and has been airing weekly since. Season 1 will include 10 episodes. Currently, millions of people are watching the show.

Rebecca emphasizes how critical it is to locate Isiah and put him through the portal. Gavin and Eve will not meet if he does not go through. In the current timeline, this implies Izzy and Josh will not be born and will die. To assist Rebecca, Sam and Riley arrived. Josh has a hard time believing what he’s hearing. Lilly attempts to get Veronica to perform better so that others see her in the same light as she does. When Veronica overhears Scott discussing the search for a cow, she resolves to assist. Josh locates Isiah and saves him from a tiger with a sabertooth. Silas notices Eve, Josh, and the rest of the gang. While Paara and Ty were searching, Ty’s condition deteriorated. They kissed after she healed him. Isiah made a mistake and mistook Levi for Josh’s father. The child does not want to leave his family, and Eve’s proposal does not appeal to him.

Gavin is relieved to find answers, but he wants Ella to believe in them as well. Izzy recommends proof, so they go to the dig site, where Gavin discovers a rock with an Ella-painted design on it. Scott was able to persuade Veronica to talk about her history. Then they discovered the cow together, and he even took credit for it. Josh confronts Levi about his affair with Eve, but Levi misunderstands and believes Josh is referring to the affair prior to the sinkhole. Ella recognizes Gavin’s rock, and we witness a flashback to her as Lilly. Eve is split between two options. She wants Isiah to survive the portal, but she doesn’t want Silas to murder Josh and Levi. Rebecca sent Lilly a map to give to Isiah, which Ella shows Gavin and company. All of the sinkholes have been identified. Eve abandons Isiah in the woods in search of Josh.