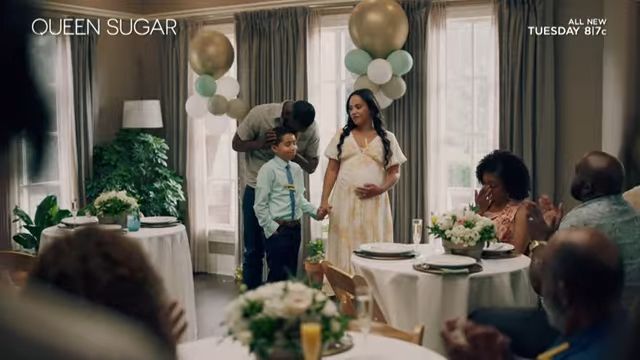 Throughout Queen Sugar Season 6 Episode 8, the Bordelon family was progressing, but not everyone was on the same path. Consider Ralph Angel. After all of the commotion caused by this man’s poor judgments, he’s now putting off finding a place to reside. He got out of jail and spent time with Aunt Vi and Hollywood.  Darla had hoped to give birth to their daughter on the farm, but she’s accepted the fact that she won’t be able to do so. So, what happens in Queen Sugar Season 6 Episode 9?  But keep in mind that this show is almost over, with only one episode remaining. You may get a sneak peek at Queen Sugar Season 6 Penultimate Episode 9 titled “Tossing in the Meadows” Synopsis at www.tvacute.com, which will help you better comprehend the episode.

In Queen Sugar Season 6 Episode 9, Ralph Angel and Darla will welcome a new addition into their modest household. In the future episode, the whole family will assemble to celebrate. Soon Ralph Angel and Darla will have a baby shower. The vast mystery abounding her land will shock Nova. She will learn of her land’s ruins. For her, the finding might be a game changer before the Queen Sugar Season 6 finals.

Queen Sugar Episode 609 Synopsis: Everyone comes together for Ralph Angel and Darla’s baby shower; Nova makes a huge discovery about the remains on her land.

Queen Sugar Season 6 Episode 9 will release On November 9, 2021. it’s time to watch it at 8/7 central. Filming for the show’s fictional St. Josephine Parish took place in and around New Orleans in 2021. You can view the released episode on OWN’s official website if you missed it. DirecTV, Fubo TV, Philo TV, YouTube TV, and Xfinity all have live streaming alternatives. VOD sites such as Amazon Prime Video, iTunes, Apple TV, Google Play, Vudu, and Spectrum on Demand also have the show available. In addition, if you have a Hulu account, you can watch the newly released episodes.

Nova is having nightmares about the raid on her house. She makes the decision to go away for a time, and Dominic agrees to accompany her. During the journey, the two become closer. Darla is looking to rent an apartment in town, but Ralph Angel claims he isn’t ready yet. Darla reminds them that their baby girl is due soon, and they need to settle in. Ralph Angel attempts to locate Theo, but his phone has been unplugged, and no one has been able to locate him. The farmers won their arbitration, but it was for a far smaller sum than they had planned. Micah believes they must come together and effect change on their own. Micah’s photography is on display at The Spot. Micah considers not having any more showings after being confronted with homophobia over some of his photographs. It prompts a discussion on Isaiah’s sexual orientation.

At the frat house, Micah claims to be the only one who protects Isaiah. Isaiah points out that he’s never specified whether he’s gay or not, and he doesn’t think he needs Micah to play hero for him. Davis piques Charley’s interest by whisking her away to their old college apartment, where he proposes to her. Charley declines his request. She adores him, but she believes they are setting themselves up to fail because she is about to run for Congress in Louisiana and he has his dream job in Los Angeles. She feels this isn’t the ideal moment for marriage, but she doesn’t rule it out in the future. Davis assures her that he is patient and that he would not abandon them. Violet is stressed and not feeling well after dealing with Celine and losing the farm to the Landrys. When her Lupus flares up, she collapses. Hollywood looks after her and makes sure she gets enough rest. Ralph Angel pays Violet a visit, and the two vow to forgive each other for everything they’ve said and done and move on.